Criminal charges have been filed by the Pennsylvania attorney general against ExxonMobil Corp.’s XTO Energy Inc. for violating environmental laws in 2010, when more than 50,000 gallons of Marcellus Shale drilling wastewater were spilled. 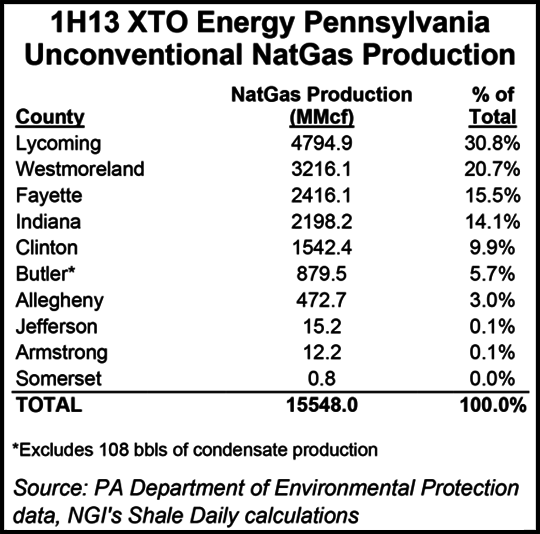 The November 2010 discharge occurred at a drilling site in Lycoming County, where XTO was drilling two natural gas wells. The incident was caused by an open valve on a wastewater storage tank, which ExxonMobil had said was an accident.

ExxonMobil in July agreed to pay a $100,000 penalty and spend up to $20 million in a settlement with the U.S. Justice Department and the U.S. Environmental Protection Agency (see Shale Daily, July 22). ExxonMobil admitted no wrongdoing as part of the settlement.

XTO owns the Marquardt well site in Penn Township, which has two gas wells on site. The wastewater release contained toxic substances that included chlorides, barium, strontium and aluminum, which were stored in 21,000-gallon storage tanks for processing, according to the charges.

XTO had hired a company to recycle the wastewater at the site from Nov. 4-Nov. 11, 2010. However, after that week, XTO officials directed the recycler to remove the processing equipment from the site and transport it to another XTO well site in West Virginia, the grand jury noted. “However, XTO allegedly continued to transport and store gas well waste water at the Marquardt site despite not having the proper equipment on site to safely store or process it.”

The illegal discharge was discovered on Nov. 16, 2010 after a Pennsylvania Department of Environmental Protection (DEP) inspector made an unannounced visit to the Marquardt site. According to the grand jury, the DEP inspector discovered that a rear discharge valve on a storage tank had been opened and a drain plug had been removed, causing gas well waste water to flow out of the storage tank onto the ground. There also was evidence of prior wastewater discharges from other storage tanks at the site.

The grand jury found that between Nov. 12-Nov. 16, 2010, more than 93,000 gallons of wastewater was transported to and stored at the Marquardt site, of which close to 57,000 gallons was unaccounted for following the spill. The toxic wastewater flowed into and polluted an unnamed tributary of Sugar Run, according to Kane. As a result of the spill, DEP required more than 3,000 tons of contaminated soil to be excavated and removed from the site.

“XTO allegedly failed to place a spill containment system under any of the storage tanks at the Marquardt site; failed to lock or otherwise secure any of the storage tanks on site; and failed to utilize any security measures to prevent unauthorized individuals from accessing the Marquardt site,” the grand jury found. XTO also did not have a permit to discharge wastewater at the site and failed to report any spills to DEP as required by law.

The case is be prosecuted in Lycoming County by Chief Deputy Glenn A. Parno of the attorney general’s Environmental Crimes Section.

ExxonMobil officials called the charges unwarranted and said it would fight.

“The criminal charges filed by the attorney general are unprecedented and an abuse of prosecutorial discretion,” the producer stated. “There was no intentional, reckless, or negligent misconduct by XTO. The incident didn’t result in significant or lasting environmental harm.”