Offshore Guyana continues to prove fruitful for ExxonMobil and its partners, with the Irving, TX-based supermajor announcing another discovery in the Stabroek Block. 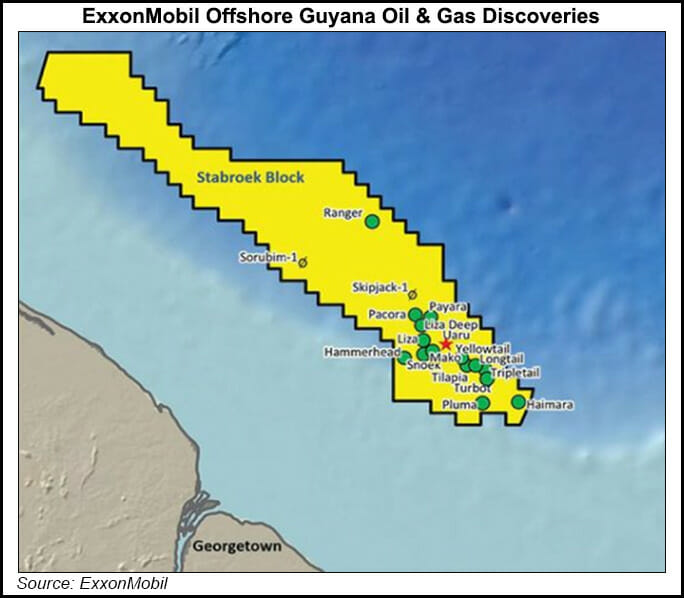 The Longtail-3 well encountered 230 feet of net pay, including newly identified hydrocarbon-bearing reservoirs below the original discovery intervals, according to ExxonMobil.

“Longtail-3, combined with our recent discovery at Uaru-2, has the potential to increase our resource estimate within the Stabroek Block, demonstrating further growth of this world-class resource and our high-potential development opportunities offshore Guyana,” said Senior Vice President Mike Cousins, who oversees Explorations.

The Longtail-1 discovery in Stabroek was drilled in 2018, encountering 256 feet of oil-bearing sandstone reservoir. Drilling in the Mako-2 evaluation well confirmed the quality, thickness and areal extent of the reservoir, ExxonMobil said.

When integrated with the discovery at Uaru-2, which was announced in April, the data supports a potential fifth floating production storage and offloading vessel (FPSO) in the area east of the Liza complex, according to ExxonMobil.

At least six FPSO units could be sited across the Stabroek by 2027, with the potential for up to 10, it noted. The block covers an estimated 6.6 million acres. Oil developments offshore Guyana have a Brent breakeven estimated at $25-35/bbl.

In the first quarter, more than 2,600 Guyanese and 600 local suppliers were said to support ExxonMobil’s activities in the country.