ExxonMobil has boosted its annual spending on low-carbon ventures to $3 billion a year over the next five years, four times higher than initially planned, with expanded emissions targets set to be issued later this year, CEO Darren Woods said Friday. 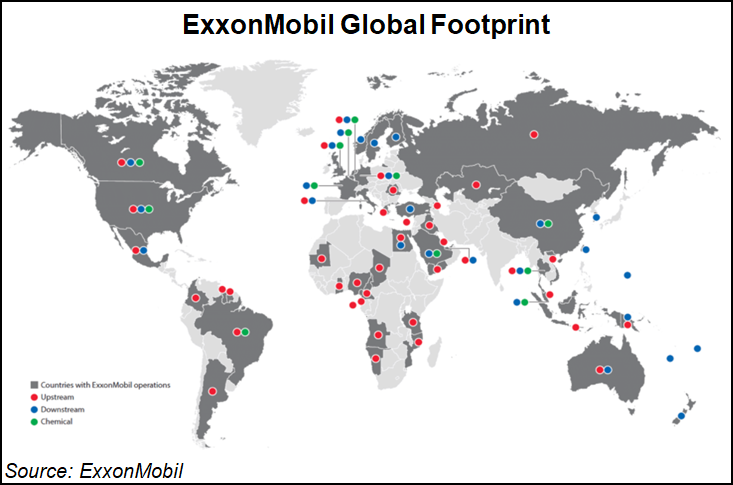 Woods detailed the $15 billion capital now earmarked during a wide-ranging conference call. Analysts were keen to learn whether the additional spending had been prodded by activist hedge fund Engine No. 1, which successfully captured three board seats earlier this year as it has pushed for less carbon-intensive investments.

The revamped board has given ExxonMobil “additional diversity of perspective” and “a lot of good, constructive discussions,” Woods said.
The Low Carbon Solutions arm launched earlier this year is stacking up potential projects on a regular basis. In the United States, a carbon capture and storage (CCS) project is underway at the LaBarge, WY, natural gas facility. Another massive CCS project, estimated to cost $100 billion, is on the drawing board for the Houston area, with support from 11 large industrial companies.

The new investments have to be underpinned by the cash flow from legacy oil and natural gas businesses, Woods said. His remarks echoed those of Royal Dutch Shell plc CEO Ben van Beurden on Thursday during the 3Q2021 conference call. Shell is also facing threats from activist investors.

The Engine No. 1 board members have gotten a look “under the hood,” and may have a clearer understanding that the low-carbon investments have to be done in a way “that’s accretive to shareholders and one that distinguishes us from the rest of industry,” Woods said. “We’re really looking for a formula that leverages our existing competitive advantages.”

The company’s “global footprint gives us exposure to a very broad set of markets. And as those markets develop somewhat uniquely, with respect to the transition, we can adjust our approach in those markets selectively to make sure that we’re on the front end…and taking advantage of the opportunities as they develop.”

‘Dual Mandate’ Of Supply And Demand

It’s a “dual mandate,” Woods said. Oil and gas companies are producing energy to feed growing demand across the world. Renewables are unable to do the job today.

“That’s really the challenge that we face as a company, and I think more broadly as a society, which is clearly a drive to move to a lower-emissions energy system and a lower emissions future,” he said. At the same time, there has to be a recognition “that the need for energy today is real and continuing to grow.

“I think striking that balance and thoughtfully moving forward and trying to make sure that as you’re transitioning from one source to another that you do it in a way that doesn’t penalize populations and compromise people’s standards of living.”

“The challenge there, when you look at what’s happening in Europe and some of the constraints as we’ve come out of the pandemic is this is a depletion business…The lack of investment that the industry broadly had in 2019,” followed by the pandemic. Now there is strong economic growth and rising energy demand.

“You put those two together — lack of demand, lower supply” and tie it back to lower Investments. “Then with the growth and demand, you get these pinch points…I think the board and management are very conscientious of that and recognize our challenge is to leverage our perspective, the experience that we have in this space…and to try to strike the appropriate balance.”

Driving toward a lower-emissions future is paramount, Woods said. At the same time, the world cannot “leave whole communities behind and penalize them with respect to their standards of living and access to affordable and reliable energy…The Investments that we’re making, I think, strike that balance.”

Asked about the bottlenecks in supply chains reported during quarterly calls by other producers and oilfield service companies, Woods said ExxonMobil was not “immune to the pressures that are impacting just about every other business out there all around the world. We’re certainly seeing some aspects of that in our business.”

However, the company began “counter-intuitively” to address potential inflationary and supply chain issues as Covid-19 began to rock the world. “We worked with our partners and contractors to think about how we put these projects on pause and then bring them back up in a thoughtful way…So the work that we did last year and working with our partners allowed us to give them some certainty around work and opportunities going forward.

“We were able to lock in some of the market factors at that point in time. So in the capital space, I think we’ve done a pretty good job and are pretty well positioned…I mean, certainly the higher price of energy is impacting our manufacturing. We’re advantaged in that space generally because most of our facilities are more energy-efficient than our competitors.” The efficiencies “offset a lot of the inflation.”

ExxonMobil is advancing many oil and gas projects worldwide. In the Lower 48, the Permian Basin remains king. Woods said two more rigs could go up in the play over the next year. The company isn’t chasing growth, though, and it has no plans for now to expand development beyond its core projects.

Why Is The Global LNG Trade Shifting?

For the liquefied natural gas (LNG) portfolio, which includes the Golden Pass export project underway on the Texas coast with QatarEnergy, Woods was asked about whether customers were more keen to secure long-term contracts today.

The LNG trade “hasn’t been a volumes game” but rather a “capital spend game” that has to be done effectively. Reducing capital spending in the massive LNG trade is an important component” of advancing projects.

“There has been some shifting, as there always is in this space,” Woods said. However, the LNG projects in Mozambique have been at risk, as a violent insurgency earlier this year halted work at TotalEnergies SE’s facility and stalled sanctioning an ExxonMobil-backed development there.

Since then, there’s been some “movement” in Mozambique, Woods said. Despite rumors to the contrary that ExxonMobil is looking for an exit from the country, “we’re still committed to that project,” he said. “We see that as a valuable opportunity, but we’re going to have to do that in the time frame available to us with some of the constraints that we see today.”

Regarding the rumors, Woods said to not put “a lot of faith in the market rumors…There’s a lot of people talking, and most…don’t have a good understanding of the discussions that we’re having and how  we see that as a very competitive resource.”

The working relationship with TotalEnergies is good, as is that with the existing Mozambique partners. The LNG project is going to be “very competitive in the long term and something that’s going to be needed.”

Going forward, ExxonMobil expects to deliver “the same growth in earnings and cash flow as our pre-pandemic plans, offsetting the pandemic-induced delays,” Woods said. Shareholder distributions have been increased by up to $10 billion over the next two years, with repurchases beginning in 2022.

Total upstream earnings rose to $3.95 billion, versus the losses of $383 million in 3Q2021. U.S. upstream profits climbed by $206 million from the year-ago loss of $681 million. Capital and exploration expenditures were nearly $4 billion, flat year/year.