ExxonMobil Corp. is positioning itself to succeed across the commodity cycle in “any price environment,” with short- and long-term investments that encompass the U.S.-driven unconventional natural gas and oil portfolio, as well as long-term endeavors that include liquefied natural gas terminals and deepwater facilities, the management team said Wednesday. 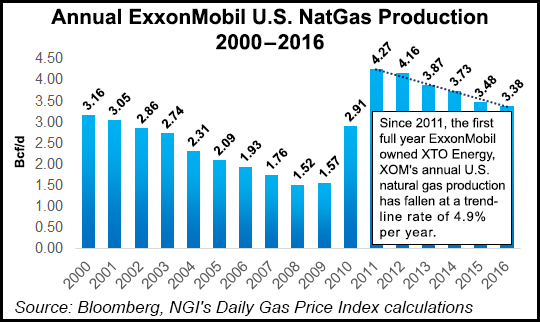 During the annual investor day at the New York Stock Exchange, CEO Darren W. Woods laid out the vision for the No. 1 North American producer. The Irving, TX-based supermajor was dogged by the commodity price downturn, and last year it only replaced 65% of its reserves.

For 4Q2016, the company also recorded a $2 billion writedown on the value of U.S. natural gas fields.

However, Woods, who took over from Rex Tillerson in January, assured analysts and investors that everything is going to plan.

“Our job is to compete and succeed in any market, regardless of conditions or price,” Woods said. “To do this, we must produce and deliver the highest value products at the lowest possible cost through the most attractive channels in all operating environments.”

Capital spending this year is set at $22 billion, up 16% year/year, with capital and exploration expenses through the end of the decade expected to average around $25 billion a year.

More than one-quarter of the planned spending in 2017 is to be directed in “high-value, short-cycle opportunities,” including in the Permian and Bakken basins. In January the company struck a $6.6 billion deal to more than double its Permian resource, adding about 275,000 acres total.

Short-cycle investments are those expected to generate positive cash flow in less than three years after initial investment. The company has an inventory of more than 5,500 wells in the Permian and the Bakken with a rate of return of more than 10% at $40/bbl, with nearly one-third generating significantly higher returns, Woods said.

Total annual net production growth from these basins alone through 2025 could be as high as 750,000 boe/d at a compound annual growth rate of about 20%, he said.

The natural gas portfolio is there, but there are no immediate plans to escalate, said Principal Financial Officer Andy Swiger, who joined a question-and-answer session following the strategy.

“It’s a complicated question,” Swiger said in response to a query about the gas portfolio. “Certainly, the investment in supply has gone down over the past few years. If you follow the rig count, it’s responded to price signals recently and gone up. There has…been a lot of demand built up although it hasn’t raised the overall demand that much.

“We are, when you look at the season we’re in right now and you think about weather and you think where we ought to be and so forth, it would tell you that there’s a little bit of structural shortness as production as actually gone down a little bit.” In turn, the gas rig count has risen, “from about 85 months ago to 150-some right now.

“There’s a lot of potential out there to meet that demand,” Swiger said. “The big question really is infrastructure. A lot of pipelines are being built to connect some of these new sources of supply to the markets, markets that have traditionally been served by depleting supplies.”

The new unconventional gas resources “can connect and can be drilled quickly,” he said. “By and large, I think you’ve got a lot of resource there that’s going to be capable of meeting demand. We hope that demand continues to grow robustly.

“But there’s still a heck of a lot of opportunity serving this huge gas market, which now has an export dimension that is becoming meaningful as well.”

ExxonMobil views the U.S. gas market “favorably, but it’s a tough business and you’ve got to be low-cost,” he said.

The company is advancing longer-term projects in Canada, Guyana and the United Arab Emirates, including liquefied natural gas export facilities. Five major upstream projects are set to start up between 2017 and 2018, which together are forecast to contribute an additional 340,000 boe/d of working-interest production capacity.

Since 2012, the company has started up 27 projects, adding 1.2 million boe/d of installed capacity. The upstream portfolio has nearly 100 projects ” that are in various stages of planning, concept selection and construction,” Woods said.

In the downstream division, ExxonMobil is investing across the value chain, while in the chemicals segment, funds are being directed to capture feedstock and other products along the U.S. Gulf Coast and in Asia.

“Our integrated investments along the Gulf Coast will capture the full value of the unconventional resource molecule, from the wellhead to market,” Woods said.