Deep-pocketed ExxonMobil and Chevron Corp. during the second quarter taught the independents a thing or two about how to make it work in the Permian Basin no matter what the price of oil and gas is. 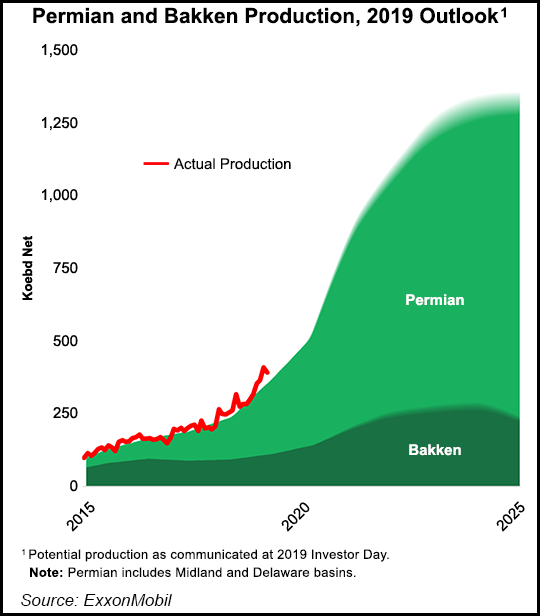 “Our unique development plans, which are focused on maximizing long-term value of the resource and leveraging the scale of ExxonMobil to drive capital efficiency, are delivering encouraging results,” Chapman said. “The rocks and well performance are extremely strong.”

ExxonMobil’s rig count is expected to average around 55 by year’s end, he told analysts. The focus is on building the most efficient wells possible to develop not only the highest initial production (IP) rates and long-term production.

“Drilling a single well and applying a larger completion with a higher intensity fracture can yield higher IPs, but it may yield lower ultimate recovery,” Chapman said. The company instead has taken the approach of “drilling several wells with less intense completions…It’s all about balancing capital outlay IPs, and the ultimate recovery to achieve the highest value.”
ExxonMobil is traveling a different road than some of its Permian peers, as it leverages its huge contiguous leasehold with scale, said the upstream chief. For example, the company plans to drill multiple horizontal benches at one time.

“Our belief is that drilling up multiple benches simultaneously is…the right way to go.”
Some competitors have looked at well spacing “and moved along a line of having closer spacing than we have in our plans,” Chapman noted. However, closer well spacing, at least for some operators, “hasn’t been successful. We have not taken that approach…”

Beyond well spacing and development plans in the queue, “we can execute through 2025 and beyond” without having to add additional leases, he said. “We don’t need to do anything from a business standpoint. What we need to do is execute our current set of opportunities, so that’s a great position to be in.”

ExxonMobil has the means to develop the Permian unlike other operators, Chapman said. “I mean, we are taking a product that is leveraging the scale of this corporation. It’s a manufacturing approach. We’re doing it at scale, which obviously a lot of the smaller players don’t have the capacity to do…We have the capacity to do that; we believe we have a significant capital advantage by doing it that way.”

Asked if ExxonMobil’s stepped up pace in the Permian could negatively impact global oil markets, Chapman said the Permian barrels were “extremely competitive. We see the left-hand side of the supply curve, and we see them as high returns and within our capacity to execute them to the standards that we expect to execute them. That’s the way we look at what really is important in the commodity side of the businesses…to make sure that we have a competitive advantage versus anyone else in terms of cost of supply…

“We must continue to work the capital cost down and to deliver on what we have laid out in our plans,” Chapman said. “Remember this is a declining business. You have to keep replacing your capacity and what’s key for us and key to win in this business is to make sure that our portfolio is the most competitive in the industry.”

Chevron’s second quarter output from the Permian averaged 421,000 boe/d, about 55% higher than a year earlier. “We expect to deliver 900,000 boe/d in 2023 with a relatively steady rig count,” said EVP Jay Johnson, who runs the upstream division.

Chevron operated on average 20 rigs in the quarter and had another 10 or so nonoperated rigs working its legacy fields.

One of its biggest advantages in the Permian is that it’s had leases for decades, Johnson noted. Most of its leasehold has no or low royalty rates of $5.00/bbl or below, less than half of most of its competitors.

“The royalty benefit alone leads to returns that are about 10% points higher than a comparable well subject to the standard royalty burden,” Johnson told analysts.

Chevron also receives royalties from producing acreage leased to other operators, barrels that require no capital from the San Ramon, CA-based major.

“In total, these royalty contributions make up about 20% of our production throughout the five-year period and contribute to delivering our expected production profile,” he said.

To optimize its position, the company also is in factory mode to maximize well spacing, landing zones and completions. Contiguous acreage also is an advantage, with average laterals expected to approach 10,000 feet in 2020.

Chevron conducts benchmarking to see how it stacks up against the other Permian operators, and it continues to be an evolving story, Johnson said.

“We have a very good understanding, particularly in terms of the type curves across the entire basin,” he said. “We…actually run decline curves across not only our own but competitors’ wells so that we understand how our wells are performing…We’re actually very comfortable with the overall performance not only in terms of the recoveries, but the economics that we’re generating from the execution work.”

Chevron is running enough rigs to keep each of its Permian development areas in line with internal goals.

“One of the advantages of the Permian is in the initial drilling,” Johnson said. “We fill the facilities up, but then we can go back through infill drilling programs. By going after the subsequent benches and development areas, we just continue to keep those facilities full.”

It takes less rig activity for subsequent drilling campaigns and to maintain production in a given area, he said. “I’m not too worried about what some people see as a problem with these individual Permian wells.”

“There have been a lot of questions,” about why Chevron doesn’t increase its rig fleet and become more aggressive.

“The reality is we continue to learn as everyone in the industry is as we move forward,” Johnson said. “And I think a lot of the moves we’ve made to stay focused on returns now are paying off. Many people talk about how high their initial production rates are in the first six-month rates, but…that can actually damage wells and cause aggravated decline curve.

“We’ve been able to continue to deliver right on our production profile,” Johnson said, “and we feel very, very good about how our wells are performing.”