ExxonMobil is boosting its capital investments over the next five years around the world, prioritizing the Permian Basin, Brazil, Guyana and LNG, with a “sizable increase” in lower-emissions initiatives, executives said Thursday. 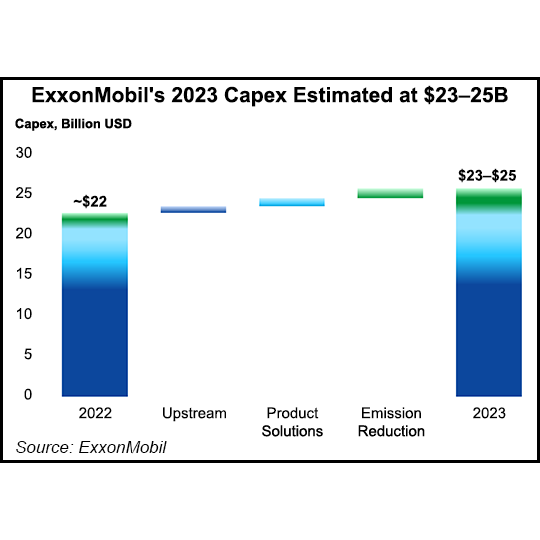 The corporate plan through 2027 would hold annual capital expenditures (capex) at $20-25 billion, while growing lower-emissions investments by nearly 15% to $17 billion. Compared to 2019, earnings and cash flow are forecast to double by 2027.

“For too long, the conventional wisdom about ExxonMobil was that we had to make a choice between meeting the world’s energy needs or playing a leading role in the energy transition,” CEO Darren Woods said during a webcast to lay out the spending plans.

“That view has always been flawed. The fact is, it is an ‘and’ equation, one in which we produce the products societies need and lead the world in reducing greenhouse gas emissions – our own and others.”

Investments in the coming year are designed to help increase oil and natural gas supply to meet global demand. The company also remains on track to deliver a total of $9 billion in structural cost reductions by year-end 2023 versus 2019.

With investments in “high-return, low-cost-of-supply projects,” more than 70% of the capex next year is set to be deployed in Brazil, Guyana, the Permian and in liquefied natural gas projects around the world.

Next year, production is forecast to be flat at 3.7 million boe/d, assuming an average $60 Brent price. At that price, the company expects to offset the impact of divestments, including the expropriation of Sakhalin-1 in Russia.

“We expect our production to increase by 500,000 boe/d by 2027 to about 4.2 million boe/d, playing a critical role in meeting anticipated increases in global demand,” CFO Kathryn Mikells said.

“This includes gross production in excess of 850,000 b/d in Guyana – more than a 130% increase versus today – and net production of more than 800,000 boe/d in the Permian, which is nearly 45% more than current levels. We also expect to increase our supply of LNG to 27 million tons/year.

All of ExxonMobil’s LNG investments that bring on new volumes over the next five years “generate returns that are greater than 10% at or below, prices of $6/MMBtu,” Mikells said.

ExxonMobil has LNG projects in the queue including in Mozambique, where the Coral project recently reached first gas production. The Golden Pass facility built jointly with Qatar on the Texas coast is scheduled to be online in 2024.

With the investments, ExxonMobil also expects to reduce upstream-operated greenhouse gas emissions (GHG) intensity by 40-50% through 2030 from 2016 levels.

“While we’re not immune to the higher inflation we’ve all seen recently, over the plan period we expect our long-term contracting strategies and structural cost reductions to largely offset the increased costs associated with higher activity and market inflation,” Mikells said

The company also is expanding its $30 billion share repurchase program, which is now up to $50 billion through 2024.

Nearly 40% of the spending in low-emission initiatives would be directed toward building out the business with customers to reduce their carbon dioxide (CO2) emissions.

The “primary emphasis” is on large-scale carbon capture and storage, biofuels and hydrogen. The balance of the capex would support the 2030 emission-reduction plans and ExxonMobil’s 2050 direct and indirect net-zero emissions, aka Scope 1 and 2.

“We are leading the industry in the energy transition through a unique combination of differentiated advantages providing lower-emission solutions with accretive returns,” Wood said. During 3Q2022, “we announced the largest-of-its-kind customer contract to capture and store up to 2 million metric tons of CO2/year, which is a good example of how we’re supporting other companies in reducing their greenhouse gas emissions.”

In the Permian, the company also is on track to reach net-zero Scope 1 and 2 emissions from its operated unconventional assets by 2030.

“We’re aggressively working to reduce greenhouse gas emissions from our operations, and our 2030 emission-reduction plans are on track to achieve a 40-50% reduction in upstream greenhouse gas intensity, compared to 2016 levels,” Woods said. “We will continue to advocate for clear and consistent government policies that accelerate progress to a lower-emissions future.”

The record earnings, though, are about more than strong commodity prices, Woods told analysts.

“While it’s easy to attribute our success to higher commodity prices, the fact is, the degree to which we have grown value cannot be explained solely by prices,” he said.

“Our success was earned on the back of the right strategy and extraordinary execution by tens of thousands of employees all around the world. Our strategic priorities differentiate us in today’s higher-price environment. They’re the foundation of our industry leading performance and are robust to a wide range of potential future scenarios.”

Said Woods, “We have a winning proposition. Put simply, it’s to use our…competitive advantages to provide innovative solutions that meet society’s needs and reward shareholders.”

The capex strategy “gives us the flexibility to pace investments based on developments we see over time, effectively allocating resources as the markets and policies evolve.”

The long-term view is a “willingness to invest countercyclically, and buck conventional wisdom on how ExxonMobil can help society achieve its aspirations,” Woods said. “Over the past few years, we’ve demonstrated our courage of conviction and made tough decisions to fundamentally change and profitably grow our business. You can continue to count on this.”