Shares of EV Energy Partners LP (EVEP) took a hit Friday after the company announced net losses for the fourth quarter and full-year 2012, and said it could take anywhere from one month to the rest of the year to sell most of its acreage in the eastern Ohio portion of the Utica Shale. 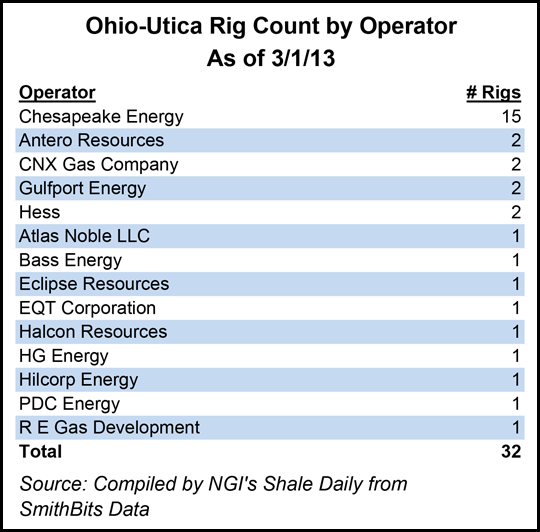 John Walker, CEO of privately held EnerVest Ltd., which controls publicly traded EVEP, told analysts during a conference call on Friday that there has been one bid for EVEP’s overall core position in the Utica, plus multiple bids on four packages and several individual bids for acreage in some Ohio counties.

“We were initially offered several properties in exchange for some or all of our Utica holdings,” Walker said Friday. “[But] our valuation of the exchange properties from potential buyers was below the expectations of the parties offering those properties.

“We spent a considerable amount of time on a large transaction for most of these counties, and that negotiation is still showing progress. In addition, we have reopened negotiations on two Northern counties with multiple parties. Some companies continue to press us into selling individual counties, which we may do if the price is right.”

While EVEP did not disclose the name of the negotiating parties, an analysis of SmithBits data on the current Ohio-Utica rig count revealed the most active operators in the play. Of the 32 rigs active as of March 1 in the Ohio-Utica, 15 of them are operated by Chesapeake Energy, while Antero Resources, CNX Gas Co., Gulfport Energy and Hess are operating two rigs apiece. The remaining nine rigs in the play are each operated by a separate operator.

“I am disappointed that we’ve not executed the purchase and sale agreement yet,” Walker said Friday. “Fundamentally, the bids have to meet our expectation county by county, and terms must also be acceptable and must conform to standard industry terms.

“I am leading the negotiations with a highly experienced team, and I want to repeat we’re not going to do a transaction that does not deliver an attractive price and acceptable terms. We will announce each deal as it is signed, but I believe that the process could take anywhere from a month to the remainder of the year. Believe me, I am spending an overwhelming amount of my time on this important process.”

EnerVest executives have previously disclosed that the sale of its acreage in the Utica would free proceeds for other oil and gas fields that require less capital and are less risky. The company hired Jefferies & Co. to find a buyer, who would become a joint venture (JV) partner with Chesapeake Energy Corp.

“Most of the drilling activity is occurring in the wet gas window,” Houser said, adding that the company’s JV partners in the Utica — Chesapeake and France’s Total SA (see Shale Daily, Jan. 4, 2012) — are the most active in the play. He said Chesapeake operated about 133 JV wells in 2012 and expects to spud another 240 wells in 2013.

“[Chesapeake has] 15 rigs running in the first quarter 2013 and will have 16 rigs running for the remainder of the year,” Houser said. “Their drilling efficiency continues to improve, and drilling time has continually decreased and lateral link has been increasing.

“Thirty-six wells in which EnerVest has an interest are currently shut in, and many more that EnerVest does not have an interest in we understand are waiting on processing capacity to become available.” Houser added that Dominion Resources Inc.’s natural gas processing and fractionation plant in Natrium, WV, opens in April (see Shale Daily, Jan. 31, 2012).