European natural gas prices declined on Monday, when supply concerns were eased by Gazprom PJSC, which did not reduce the supplies it’s shipping through Ukraine after warning of cuts last week. 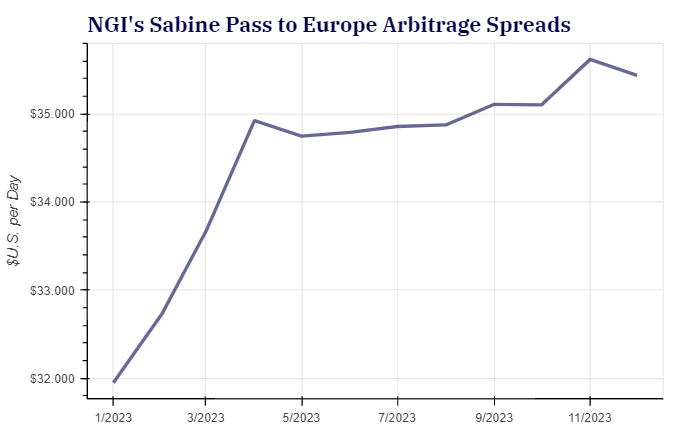 The January contract fell by 1% after Gazprom said conditions had been met to keep moving gas at current levels into Ukraine, one of the only outlets for Russian exports to Europe that’s still moving supplies. Deliveries were stable at about 1.4 Bcf on Monday.

The company claimed last week that all of the gas transiting Ukraine for Moldova was not being delivered and paid for. Gazprom said Monday those supplies were received and that Moldovagaz SA paid for all the supplies it imported. However, Gazprom again warned that it could reduce or stop supplies at any time for payment violations.

TTF had climbed higher last week, when colder weather finally settled in across Europe following a warm start to the heating season and forecasts showed below-normal temperatures for the beginning of December. Gazprom’s threats pushed the contract higher.

Traders last week were also considering a European Commission proposal to cap prompt TTF futures prices. But the proposal ultimately failed to garner approval at a special meeting of energy ministers in Brussels. The proposal is expected to be revised and discussed again at a Dec. 13 meeting.

For now, the continent has ample gas supplies in storage, which is nearly 94% full. Germany’s first floating storage and regasification unit arrived on the country’s shores last week, where it’s expected to be deployed at a floating terminal in Lubin.

Woodside Energy Group Ltd. also said Monday it shipped a cargo carrying about 3 Bcf of LNG to Europe from Australia’s North West Shelf. Australia typically supplies liquefied natural gas to customers in North Asia, but Europe’s push to secure additional gas supplies this year has upended energy flows. The cargo was delivered Sunday to the Gate Terminal in the Netherlands.

Asia Regas Use Down

In Asia, the Japan-Korea Marker has gained some strength along with TTF over the last week. But Europe continues to hold a premium over the Asian benchmark.

Mild weather and strong storage inventories in Asia continue to limit buying interest in the region.

According to Rystad Energy, utilization at Asia’s regasification facilities remains around 40%, compared to nearly 50% at the same time last year.

Natural gas import terminals in China, one of the world’s largest LNG buyers, are running at 68% of nameplate capacity, down from 75% a year ago, Rystad said.

Energy demand in China has been limited by a surge in Covid-19 cases in some parts of the country and aggressive measures by the government to curb outbreaks. The trend has weighed heavily on crude oil prices as well.

Natural gas prices dropped in the United States too as the week got underway. Forecasts shifted warmer over the weekend and reversed a climb higher last week when more weather driven demand appeared likely.

As for potential bullish catalysts, there’s the possibility of a rail workers strike “as soon as Dec. 9,” and the Freeport LNG terminal could begin to “show signs” of returning to service in the coming weeks, according to EBW Analytics Group LLC.

The market remains looser for now as U.S. gas production is estimated at nearly 101 Bcf/d, said Schneider Electric analyst Christin Kelley. She added that the storage deficit is just 1.1% below the five-year average after a smaller-than-expected withdrawal from stocks for the week ended Nov. 18.

Feed gas nominations to U.S. LNG export terminals also were at 11.65 Bcf early Monday, down from levels of more than 12 Bcf/d last week.