Midland, TX-based Escondido Resources II LLC touted Wednesday what it said is the highest-producing natural gas well to date in the Eagle Ford Shale of South Texas: its Spohn Ranch 1H well in the Hawkville Field in Webb County. 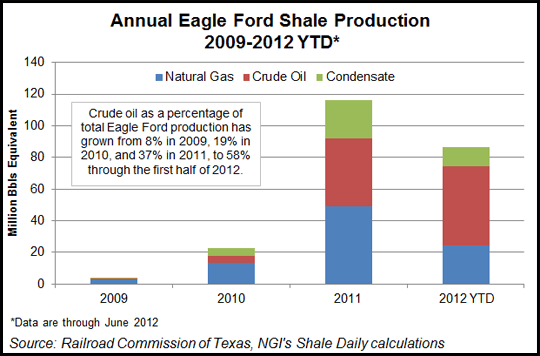 Initial production (IP) from the well exceeded 16 MMcf/d, and it produced more than 400 MMcf of gas in its first 30 days, Escondido said. The well was completed with a 6,975-foot lateral and 25 fracture (frack) stages. Escondido plans to further develop the area.

“It’s exciting to drill a big well in the Eagle Ford Shale like the Spohn Ranch 1H,” said Escondido CEO William E Deupree. “We also continue to have success in South Texas in the shallower Escondido and Olmos formations and have expanded our presence eastward into the oilier portions of the these two formations in La Salle and McMullen counties.”

Escondido also completed its first horizontal oil well in the Escondido formation. The Storey 4H well is in LaSalle County in the Tres Encanto Field, an area also referred to as the White Kitchen Field. In its first 30 days of production, the Storey 4H averaged nearly 400 b/d of crude oil production along with 1.2 MMcf/d of associated gas. The well was completed with eight frack stages over a 4,475-foot lateral. The company is drilling seven follow-up wells.

The company’s latest horizontal oil well in McMullen County targeted the Olmos formation. In its first 30 days production from the Nichols 3H averaged more than 300 b/d and 1.1 MMcf/d of associated gas. The well is the third successful horizontal oil well the company has drilled in the prolific AWP Field and was completed with 13 frack stages over a 6,667-foot lateral. The company is currently drilling three additional wells in the field.

Escondido has about 60,000 net acres in the shallow Escondido and Olmos formations in Webb, LaSalle and McMullen counties and owns the rights to drill the deeper Eagle Ford formation on more than half of its acreage, the company said. Current production capacity exceeds 75 MMcfe/d from the Wilcox, Escondido, Olmos and Eagle Ford formations.

Additionally, Escondido has leased nearly 72,000 acres in Pecos and Terrell counties in West Texas and expects to drill its first well in the fourth quarter, focusing on conventional drilling for crude oil in the Strawn formation.

“We’ve also widened our presence by accumulating a large acreage position in West Texas where we expect to apply the stimulation techniques we’ve employed in the Olmos and Escondido formations to the largely overlooked Strawn formation,” Deupree said. “These initiatives will transform Escondido Resources from a company focused almost entirely on natural gas to a much more liquids-focused entity.”

Crude oil as a percentage of total Eagle Ford production has grown from 8% in 2009 to 58% through the first half of this year, according to Railroad Commission of Texas data. Over the same period, natural gas decreased from 77.4% to 28% of the play’s production.