EQT Corp. agreed Thursday to acquire Alta Resources Development LLC in a $2.9 billion deal that would add another 300,000 net Marcellus Shale acres and give it entry into Northeast Pennsylvania. 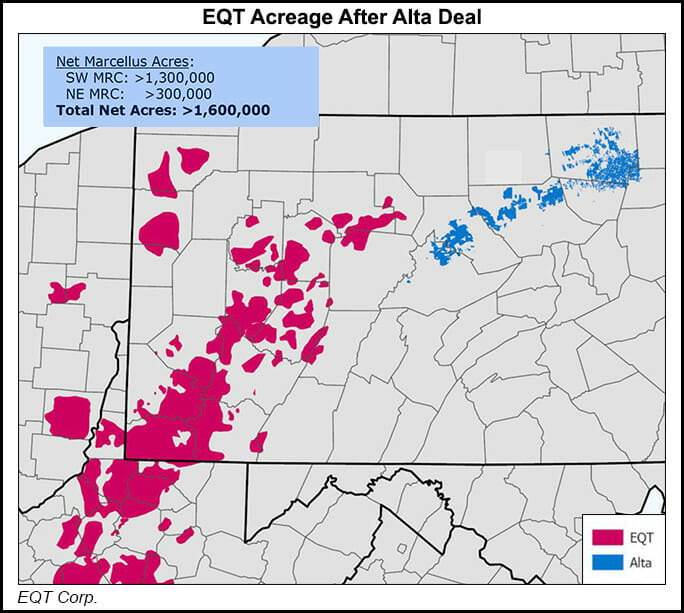 Alta’s properties include 300 miles of midstream gathering lines, a 100-mile freshwater system and an “in the money firm transportation” book valued at $235 million that would provide further access to Northeast markets, Rice said.

Overall, the deal is projected to increase FCF by 55% to $5.5 billion through 2026. EQT said the cash engine is mainly attributable to Alta’s cost structure, which is driven by low royalty burdens averaging 14%, direct mineral ownership and the midstream assets.

Under different management teams, EQT has continued to consolidate the basin for years. Since 2016, it has acquired Rice Energy Inc., Trans Energy Inc. and assets from Stone Energy Corp. and Equinor ASA, among others. Most recently, the company acquired all of the Chevron Corp. assets in Pennsylvania and West Virginia.

CFO David Khani said Alta had been marketing the assets. Rice said Alta’s decision to sell was likely spurred on by the company’s deal with Chevron that sent a signal to the broader market “that consolidation was happening.”

EQT agreed to pay $1 billion in cash and $1.925 billion in common stock. The company plans to fund the cash portion of the transaction with cash on hand and debt.

The Chevron acquisition was the main reason 1Q2021 production jumped to 415 Bcfe from 385 Bcfe in the year-ago period. EQT plans to run one rig on the Alta assets after the deal closes as planned in 3Q2021 to maintain the current 1 Bcf/d of production levels. Rice estimated that the assets have a 10-year drilling inventory.

EQT has also announced partnerships with Equitable Origin, MiQ and Project Canary to certify that about 4 Bcf/d from more than 200 wells in Pennsylvania is being responsibly produced according to third party environmental standards.

“We’ve received multiple inquiries from customers and end-users since making these announcements, which demonstrates there is growing demand for certified gas,” Rice said during the call to discuss first quarter results. “We believe Appalachia is best positioned to capitalize on this differentiated product.”

The company also saw commodity prices increase during the first quarter, reporting an average realized price of $2.61/Mcfe, compared to $2.49/Mcfe in the year-ago period.

Net losses in 1Q2021 totaled $41 million (minus 15 cents/share), compared with a net loss of $167 million (minus 65 cents) in the year-ago period. The 1Q2021 loss resulted from a loss in derivatives not designated as hedges, as well as lower dividends and increased expenses.