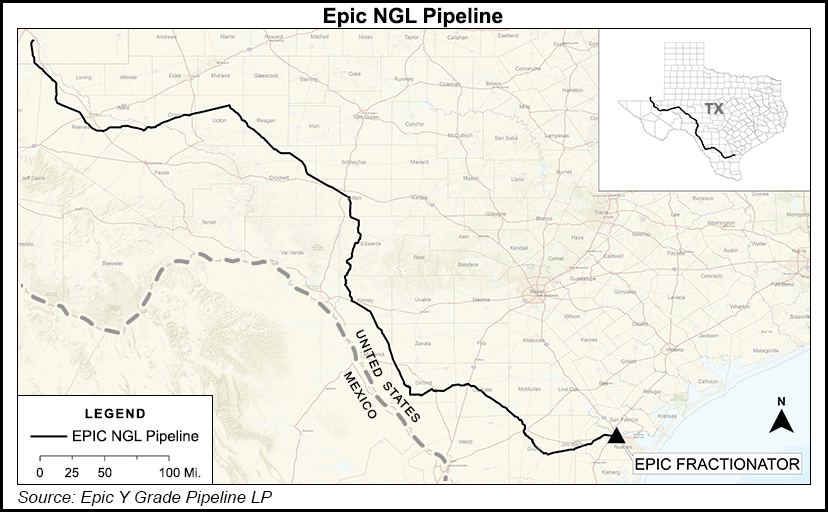 Noble Midstream Partners LP, majority owned by Noble Energy Inc., is taking on the most interest by exercising an option for a 30% stake in the Epic Crude Pipeline Project and a 15% interest in the Epic Y-Grade Pipeline. Total cash equity investment is estimated at $165-180 million for the NGL pipeline and $330-350 million for the oil pipeline.

Altus Midstream Co., formed last year by Apache Corp. and Kayne Anderson Acquisition Corp., agreed to buy a 15% interest in the crude oil pipeline, while a subsidiary of Diamondback Energy Inc. is taking a 10% stake also in the oil system.

“The strategic value of these projects to our shippers is clear through the exercising of the options by our partners,” said Epic CEO Phillip Mezey. “Both projects remain on schedule and are critical to the continued development of the Permian Basin and Eagle Ford Shale.”

Because of customer demand for oil transportation from the Permian, Epic is using the third and final phase of its Y-grade pipeline to start up oil service beginning in the third quarter.

Once the oil system and an NGL fractionator are completed, which is expected later this year, NGL service would begin. The 24-inch diameter Y-grade system is being designed to carry liquids about 700 miles with throughput capacity initially of 440,000 b/d.

Included in the Y-grade system is 180,000 b/d of initial fractionation capacity and associated purity product takeaway in Corpus Christi. Construction of the final phase from the Benedum Plant near Midkiff, to Robstown, near Corpus, is about 60% complete.

Once completed early in 2020, the 30-inch diameter crude pipeline would have initial capacity of 590,000 b/d. With additional pumps and storage, Epic said it could increase capacity to around 900,000 b/d.

Construction of the oil pipeline is expected to begin this month, and “significant construction synergies” between the crude and Y-grade pipelines are anticipated, Epic noted.

Taking equity stakes in both systems are expected to complement Noble Midstream’s existing pipeline portfolio in the Permian, as well as “enhance our customer diversification and add a stable and high-quality source of cash flow from a premier U.S. unconventional basin,” said Noble Midstream general partner CEO Terry R. Gerhart.