The Environmental Protection Agency (EPA) wants to drop its previously proposed effort to develop effluent guidelines for coalbed methane (CBM) extraction, according to a notice in theFederal Register. 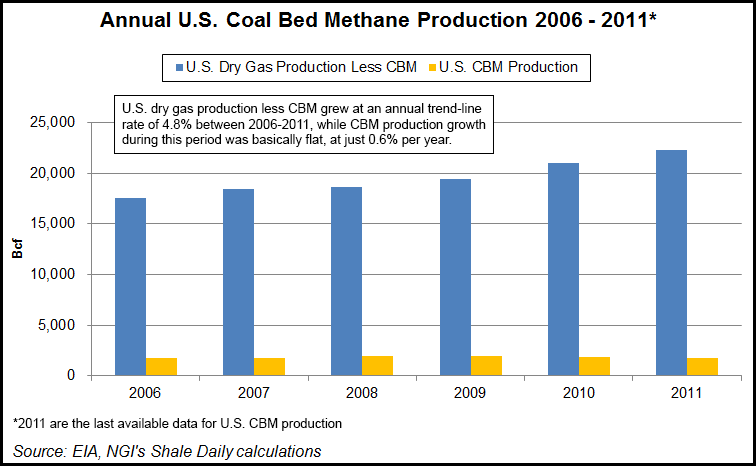 In an announcement of the availability of its Preliminary 2012 Effluent Guidelines Program Plan and its 2011 Annual Reviews, EPA said it “is proposing to delist from the effluent guidelines plan the rulemaking for the coalbed methane extraction subcategory based on new information regarding the declining prevalence and economic viability of this industry, due in large part to the increased extraction of natural gas from other sources, such as shale formations.” CBM’s reduced market share could make it cost prohibitive for those in the industry to meet control measures EPA would put in place, the agency said.

EPA will accept public comments on the proposal until Oct. 7.

U.S. dry gas production less CBM grew at an annual trend-line rate of 4.8% between 2006 and 2011, while CBM production during the same period was basically flat at just 0.6% per year, according to Energy Information Administration data.

As part of its effluent guidelines planning process under the Clean Water Act (CWA), the EPA has been considering for some time whether to initiate a rulemaking to revise the regulations to address coalbed methane extraction flowback waters and considering how best to address shale gas extraction wastewater discharges to publicly owned treatment works under the CWA (see Shale Daily, April 18, 2011).

EPA’s report on the potential impacts of hydraulic fracturing (fracking) on drinking water resources will likely be finalized in 2016 (see Shale Daily, June 21). A draft report on the potential effects of fracking on drinking water would be released for comment and peer review in late 2014, with the final report published in 2016, after review by a panel of independent scientists.