EOG Resources Inc. increased oil and natural gas production during the second quarter. Still, the Houston-based independent’s executives, wary of the pandemic’s potential, said they had no immediate plans to further ramp up output. 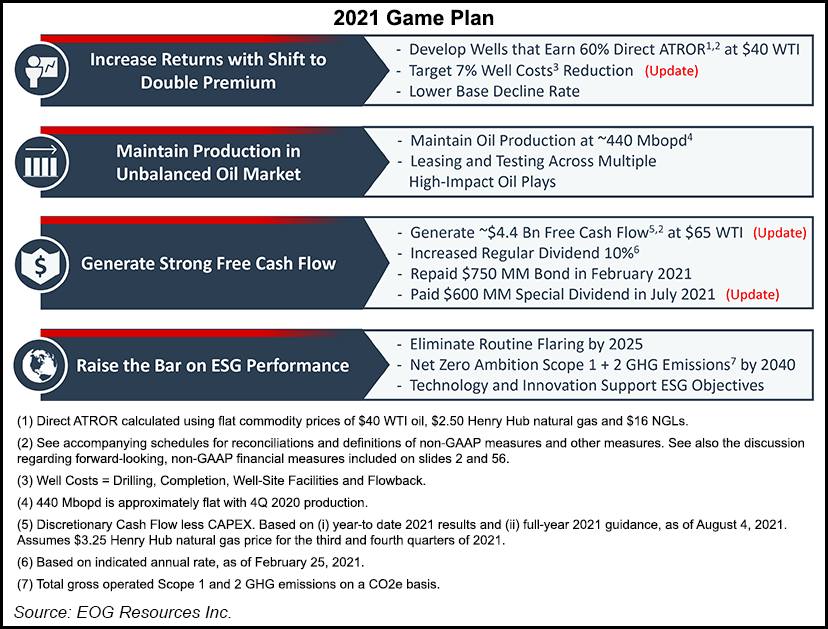 “We’re not going to grow until the market clearly needs the barrels,” President Ezra Yacob told analysts during a call Thursday to discuss 2Q2021 results. “We’re committed to staying disciplined. Currently, we want to see demand return to pre-Covid levels.”

OPEC and its allies, aka OPEC-plus, are in the midst of an ongoing effort to gradually increase production to meet expected demand. The group of oil producers plans to unwind all of the cuts made amid the pandemic in 2020, when it slashed output by 9.7 million b/d.

Big U.S. producers, however, are generally keeping output steady. Domestic oil production averaged 11.2 million b/d last week, flat with the prior week, and far lower than the early 2020 peak of 13.1 million b/d reached before the pandemic.

Oil prices have rebounded this year, but many U.S. producers are in wait-and-see mode as variants of the coronavirus cause new outbreaks and threaten the global demand recovery. Count EOG Resources in that camp, executives said.

“I think the U.S. will remain disciplined,” CEO William Thomas said on the earnings call.

EOG said it was too soon to forecast sustained higher levels in the second half of the year or to consider increases in 2022.