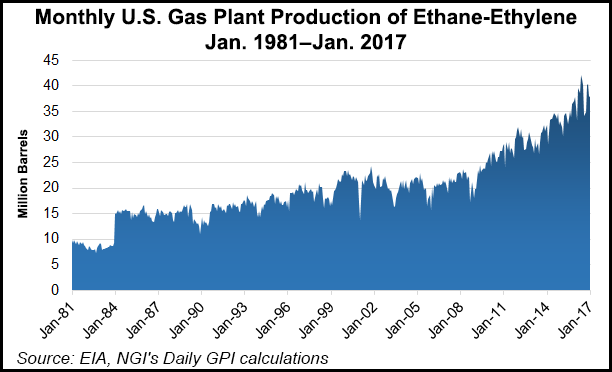 The company is repurposing a large, high-capacity ethylene storage well at its Mont Belvieu, TX, complex. Following completion of the project, which is expected as early as the third quarter of 2018, the 5.3 million bbl cavern would be able to inject/withdraw ethylene at a rate of 2,000 bbl per hour (BPH), expandable to 4,000 BPH. Seven third-party ethylene pipelines are within two miles of the ethylene well, providing connectivity opportunities into the system, Enterprise said.

Additionally, Enterprise is building a 24-mile, 12-inch diameter ethylene pipeline from Mont Belvieu to Bayport, TX, with the potential to connect both producing and consuming sites south of the Houston Ship Channel to Mont Belvieu. The pipeline would be routed through Enterprise’s ethane export terminal at Morgan’s Point, which provides the partnership future flexibility should it develop ethylene export capabilities at the terminal.

Ethylene export has been considered by the partnership for a while. Last summer, Jim Teague, CEO of Enterprise’s general partner, talked about U.S. ethylene oversupply and the potential for exports.

“If you believe crude prices are not sustainable at this level, and you believe there’s plenty of natural gas in the U.S., then you have to believe that the gas-to-crude price is going to be supportive of ethylene plants in the U.S. versus ethylene plants in other parts of the world,” Teague said during an earnings conference call. “You can have ethane go up; you can have margin expansion between ethane and natural gas, and it would still be cost-advantaged relative to other parts of the world. In other words, there’s room here for everybody to win.”

Ethane is used almost exclusively to produce ethylene. U.S. ethane production is expected to increase to 1.7 million b/d in 2018 from an average of 1.25 million b/d in 2016, according to a recent U.S. Energy Information Administration (EIA) Short-Term Energy Outlook. Increased ethane production is expected to be consumed in the U.S. petrochemical industry and exported to other countries, EIA said in a January note.

“As U.S. ethylene production capacity expands over the next three years, access to reliable logistics services will be needed, and Enterprise is ideally positioned to fill the gap,” said Enterprise’s R.B. Herrscher, senior vice president of petrochemicals for the general partner. “Enterprise has been operating ethylene storage facilities and pipelines for more than 20 years. These growth capital projects will expand our ethylene system to meet the growing needs of the petrochemical industry.”