Anybody hear about hydrogen’s potential in the energy transition? A better question: has anyone not heard about the potential for the ancient element to upend the oil and gas complex? 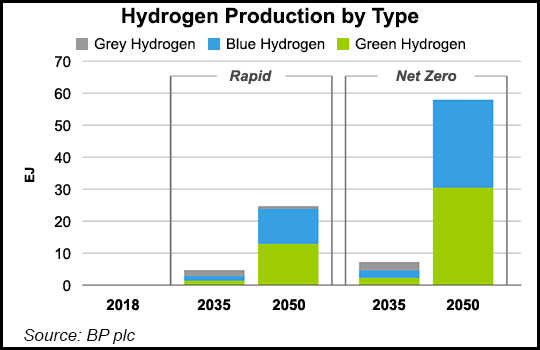 Hydrogen in all its myriad colors has become omnipresent in every conversation about the energy transition. Oil and gas operators of all shapes and sizes are working toward a lower carbon emissions future, but talk, as they say, is cheap.

“Hydrogen has gone from relative obscurity to near ubiquity in the past 12 months,” Tudor, Pickering, Holt & Co. (TPH) analysts said. While “the potential is huge, the hurdles are significant, and meaningful scale is likely multiple decades away.”

Hydrogen holds great promise, though, and that’s why it’s all the buzz. It could expand options for power generation intermittency, leading to emission-free transportation fuel. Others tout its potential as a carbon-free heat source for industrial sectors.

Hydrogen, in other words, has “jack-of-all-trades potential,” the TPH analysts said.

How Green (Or Blue) Is My Hydrogen?

Pick a color, almost any color, and there’s a likelihood it could be a form of hydrogen production. Most energy operators are focused on only two, the blue and green varieties. Blue is produced from fossil fuels, with greenhouse gas emissions eliminated using carbon capture utilization and storage, or CCUS. Green hydrogen, aka “e-hydrogen” is the get for many, as it can be produced with zero emissions water electrolysis using renewable energy.

Plans to invest in hydrogen are underway around the world, with the European Union, Japan, South Korea and the UK all going for the blue and green. Canada late last year unveiled a hydrogen strategy estimated to be worth $40 billion. Canada Natural Resources Minister Seamus O’Regan has vowed to make the country a global leader in the field.

Energy majors are all in too.

At CERAWeek by IHS Markit held in early March, the word was bandied about constantly, as executives shared strategies on navigating toward a net zero carbon world, with hydrogen definitely a passenger.

BP plc’s David Eyton, executive vice president of innovation and engineering, told the audience the energy major is going after a big chunk of the hydrogen market.

“I have no doubt that we need hydrogen as an energy vector and certainly my company is aiming to take about a 10% market share by 2030 in our core markets,” Eyton said.

The London-based major, like its peers, is charting a net-zero emissions path after launching its “new purpose” last year. Fossil fuels aren’t going away, but the carbon-free opportunities are “off the charts,” BP CEO Bernard Looney said.

Hydrogen “is definitely a gas fuel of the future,” said Looney. “There’s no question about that.” The UK major is working on a long-term project that Looney said would be “one of the world’s first net-zero industrial sites.” Hydrogen is to play a big role.

“We believe in hydrogen,” Looney added during the fourth quarter call. “It’s not something that’s going to happen overnight in terms of being a material part of BP’s portfolio…It’s 2030-plus.”

Still, BP recently unveiled what would be the UK’s largest blue hydrogen production facility in Teesside, targeting 1 GW by 2030. H2Teesside as designed could capture and store up to 2 million metric tons/year (mmty) of carbon dioxide (CO2), or around 98% of the emissions. BP and Ørsted last year also signed a letter of intent to consider a ‎project in Germany for industrial-scale green hydrogen production.

ExxonMobil is counting on CCUS as the initial way to reduce greenhouse gas (GHG) emissions, with hydrogen on the table longer term. Chevron Corp. is earmarking funds for low carbon technologies that include hydrogen and CCUS.

Royal Dutch Shell plc CEO Ben van Beurden in February said to make “real progress” in the energy transition, the Anglo-Dutch supermajor “must sell a lower-carbon energy mix.” During CERAWeek, van Beurden said without hydrogen in the energy mix by 2050, “we cannot aim to be a net zero economy.”

Total SE CEO Patrick Pouyanné during the fourth quarter earnings call said, “there is a lot of enthusiasm…from European governments to develop this hydrogen economy…The writing is on the wall. Clean, low-carbon energy is the future.”

Saudi Arabia Oil Co., aka Aramco, also is stepping up its game, aiming to build a hydrogen business by 2030. At CERAWeek, CEO Amin Nasser said the state-owned firm is keen on blue hydrogen because the country could use its natural gas stores.

Hydrogen infrastructure investments have been estimated to surpass $10 trillion by 2025. Goldman Sachs last year estimated global green hydrogen projects were on track to become a $13 trillion-plus market by 2050 for the “utilities industry alone.”

Black & Veatch (B&V), an engineering, procurement, consulting and construction giant, expects hydrogen to become a “critical element” in decarbonizing energy systems, supply chains and heavy industries. According to B&V, 35 GW-plus of hydrogen-capable power generation projects have been announced through 2030.

The long list includes Ohio’s Long Ridge Energy Terminal, a 485 MW combined-cycle project that would run with a blend of natural gas and hydrogen.

“As the number of companies with carbon-free energy goals continues to grow, we decided to make Long Ridge the first in the U.S. to burn hydrogen in a large gas turbine,” said Long Ridge President Bo Wholey. “We want to accelerate the transition to hydrogen as quickly as possible.”

A green hydrogen design in Utah, the Intermountain Power Project Renewal Project, would be an 840 MW combined-cycle gas facility powered by renewables, resulting in 100% carbon-free energy.

North American entities of all stripes are taking up the gauntlet too. The Wyoming Energy Authority has called for proposals to build a green or blue hydrogen project. In Canada, utilities are field testing green hydrogen blends with natural gas ahead of the 2021-22 heating season for Ontario and Alberta residential fuel markets. A Quebec variation is set to employ hydrogen to extract ethanol and methanol from landfill sites.

“There has never been a better time for governments and businesses around the world to invest in hydrogen technologies and infrastructure,” Cummins CEO Tom Linebarger said. “As our society recovers from the economic impacts of the Covid-19 pandemic, we have a unique opportunity to rebuild our economy by investing in hydrogen solutions to drive economic growth, create jobs and shape the future of energy and transportation.”

Earlier this year Southern Company formed a research consortium with the Gas Technology Institute and six U.S. Department of Energy national laboratories to begin a research and development (R&D) initiative, HyBlend, to address the technical barriers to blending hydrogen in natural gas infrastructure.

“Natural gas is a critical partner in the growth of renewables as we foresee numerous opportunities to leverage our existing infrastructure to support clean energy, such as hydrogen,” said R&D Vice President Mark S. Berry. “Emerging technologies such as hydrogen will be key as we work to achieve our enterprise-wide goal of net zero carbon emissions by 2050.”

Cornell University’s Energy Materials Center earlier in March announced plans to build the first hydrogen “energy station” of its kind in the nation by late 2022. The Ithaca, NY-based university is partnering with Standard Hydrogen Corp. and National Grid.

“Green, renewable hydrogen is a key piece of the puzzle to reach net zero by 2050,” said National Grid US President Badar Khan. “The new hydrogen-based system is going to reduce emissions in New York across power, transportation and heating, the three most difficult to decarbonize. Innovative systems like this one are going to move the needle for a cleaner tomorrow.”

Show Me The Money

Beyond the operators looking to advance environmental, social and governance initiatives, investment firms are diving in.

Defiance Next Gen H2 earlier in March became the first U.S. hydrogen exchange-traded fund (ETF).  ETFs trade like stocks, with share prices fluctuating all day as they are bought and sold.

“We believe that as governments and corporations continue to demand renewable energy sources and adopt more environment-friendly policies, hydrogen will be a pivotal resource to help fuel a cleaner economy.”

While there is a plethora of hydrogen-powered projects on the drawing board, the amount of energy generated in the near- and long-term forecasts remain cloudy.

In BP’s annual energy outlook, the “Rapid” transition model estimated hydrogen in 2050 would account for around 7% of (noncombusted) total final energy consumption. In the “Net Zero” transition outlook, hydrogen took a 16% share.

Leapfrogging over blue manufacturing to produce green hydrogen is not the answer either. It’s a chicken-and-egg dilemma.

Green hydrogen, however, is going to require advancements in technology to reduce the cost, or there has to be a huge expansion in wind and solar capacity. In addition, manufacturing only green hydrogen in the near term could divert renewable energy that otherwise would be used to further decarbonize the power sector.

“Our hydrogen growth forecast sees the market expanding from the current base of about 71 mmty to 85 mmty by 2030, with 80% of supply adds coming in the form of green hydrogen,” said TPH analysts.

Based on TPH’s 2030 green hydrogen costs, blue hydrogen could compete on economic grounds at natural gas prices below $5.60/MMBtu. Hydrogen markets could develop in regions, allowing it to be transported via pipeline, which would lower the cost in some areas.

The big opportunities for end-use could be in vehicles and for industrial applications. The “ultimate prize” is power, according to TPH. Still, analysts cautioned because a “viable, cost-effective storage solution has yet to emerge and provide a solution to renewable intermittency.”

Reducing the delivery cost is key.

Current delivered costs for green hydrogen are estimated today at around $28/MMBtu, or $3.79/kilogram (kg), according to TPH. If the expenses could be reduced, as has happened with wind and solar, the analysts estimated that by 2030, the delivery cost could drop to around $18/MMBtu ($2.41/kg).

“Getting costs below $2/kg is the Holy Grail among green hydrogen producers,” said NGI’s Patrick Rau, director of Strategy & Research. “That’s the long-term global cost target, and is a key element to reaching the goals of the Paris agreement by 2050.”

Another factor that could lower the cost of hydrogen is the development of regional markets, which could use pipelines instead of relying on more expensive shipping.

Still, converting gas infrastructure to hydrogen won’t be easy. Siemens Energy CEO Christian Bruch said at CERAWeek hydrogen would not be the “silver bullet that solves all problems” for the oil and gas world.

“I don’t see really a large-scale commercial viability any time before 2025 or even the end of the decade,” Bruch said. “There is still some way to go to prove we have resilient and reliable systems.”

Hydrogen, noted Rau, “is also highly corrosive on steel, and most pipeline compressor stations can only handle a relatively low hydrogen-methane mixture. These are obstacles that must be overcome for hydrogen to be shipped via pipelines en masse.”

Enough policy momentum appears to exist through 2030 to drive a compound annual growth rate in the hydrogen market of 20-23%, according to TPH estimates. To put that into perspective, “if the entirety of our 2030 green hydrogen forecast went to power, it amounts to just 1% of our 2030 global power demand forecast.”

Kinder Morgan Inc. CEO Steve Kean said in January “hydrogen is promising,” but he noted that it had been “the fuel of tomorrow for decades.” He suggested during the 4Q2020 earnings call that advancing the fuel will take “some subsidies to get to the point where it’s really actionable…

“Will it ultimately serve a compelling fraction of the energy needs? Yeah…but there’s a lot to be done there to make that a sensible thing to do” before companies may be willing to invest.