Calgary-based Encana Corp., which made its name by successfully exploiting onshore natural gas resources, is taking a sharp turn toward capturing liquids and oil, as it targets a 300% jump in cash flow and a 60% gain in production by the end of 2021. Its No. 1 target, the Permian Basin, could see production quadrupling over the period. 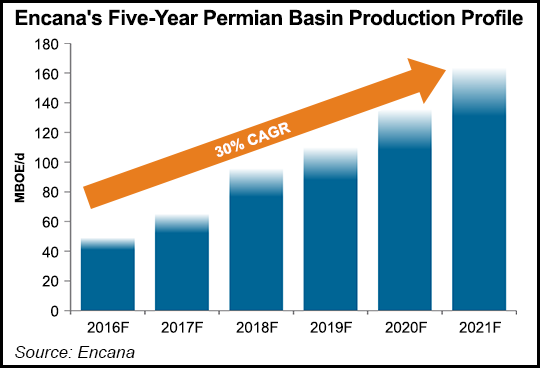 The independent’s transformation began three years ago when CEO Doug Suttles, a former COO for BP plc, came in to resuscitate the ailing operations, which were bloated and suffering from low natural gas prices (see Shale Daily, June 12, 2013). Suttles and his management team spent Wednesday morning in New York City highlighting the turn to liquids, which by 2021 is designed to reduce gas production from 65% to an equal mix with oil/liquids.

“We’ve been very disciplined and consistent in following our strategy,” Suttles said. “And as a result, we’ve successfully transformed the company. We’ve now reached an inflection point, where we consider this transition complete…We are now entering a phase of delivering value from the tremendous business we’ve created.”

The revamped portfolio, whittled to under 10 North American onshore targets from nearly 30, today “is not dependent on any price recovery to succeed,” Suttles said. The foundation is the “core four,” led by the Permian Basin, as well as the Eagle Ford Shale, and the Montney and Duvernay formations in Western Canada. To give investors an idea of how important the Permian is to Encana’s growth plans, capital spend in 2017 overall is set to move to $1.4-1.8 billion, about 30% more than the $1.1-1.2 billion target this year. More than half of the spend already is earmarked for West Texas.

Efficiencies and hydraulic fracture (frack) projects are getting better every quarter. Initial production rates from wells drilled in Midland and Upton counties are averaging 700 boe/d over 30 days, with cumulative production over six months averaging 90,000 bbl. Estimated ultimate recoveries are forecast to be 900,000 boe, with lateral lengths that average 7,500 feet and drilling/completion costs of $5.1 million.

“We’ve shifted the pace of innovation in the play, from understanding our frack geometry, employing multiple rigs and frack spreads on a single pad, to how we manage our water logistics,” Balmer said. “Precision targeting” now is the name of the game, frack-wise, with increased proppant when needed. “Lease operating expenses are down to $3.00/boe for horizontal wells.”

The Permian locations drilled to date are delivering solid income margins at $30/boe, “all-in profitability,” with finding/development costs of $9.00/boe and general/administrative costs of $3.00/boe, Balmer said. The Permian leasehold’s income margin at the corporate level is more than $17.00/boe, he said.

Encana has to date identified around 10,000 drilling locations across the Permian, with 3,000 or so meeting its definition of “premium return inventory,” Balmer said. These premium locations offer returns of more than 35%, based on 660-foot well spacing. Tighter well spacing and even more efficiencies could result in even better performance.

“The growth plan…has us drilling about 40% of our locations over the next five years, which is about 10% of our total inventory,” Balmer said. Since the company moved in, its production in the Midland already has doubled.

“Not only do we have one of the largest core acreage positions in the play, but we’re already the second-largest producer,” after Pioneer Natural Resources Inc.

Encana also is relentless in reducing its drilling days per well, which to date have fallen from an average of 27 in 2014 to about 15 days. The “pacesetter” well of 10 days is “under pressure with every single well that we drill,” Balmer said.

Average drilling and completion well costs in the Midland now are about $4.9 million/well, versus more than $8 million/well two years ago. Mud system improvements shortened intermediate casing string, better bottomhole assemblies and mud motors, along with advanced survey tools have contributed to the efficiencies.

“We’ve drilled more than 5,000 feet in a single day in the vertical section of a well,” Balmer said. “On a different well, we’ve put over 4,000 feet of lateral into the ground in a 24-hour period. On the completion side, it’s not unusual for us to have 19 hours or more per day of pumping, so obviously that emphasizes the focus on putting the job away as opposed to downtime.”

“If you’re not in the best rocks, you are going to be struggle to be successful through the cycle,” he said. “No matter how good you are, as an oil and gas company, great management can’t make bad rocks good. So you have to be in the right places. This is key. We believe there is real value in having a multi-basin, focused portfolio. Having four core positions gives us tremendous advantage when it comes to staying at the cutting edge of technology. It gives us enormous flexibility with our capital, our ideas and our people.”

Encana was among the first to use what came to be called a manufacturing process in the onshore, using multi-well pads to generate more production more efficiently. Suttles would prefer Encana be known for more than that.

“We don’t believe it’s a manufacturing process,” he said of unconventional production. “We believe it’s an innovation process. At Encana we do not try to standardize and duplicate…We expect to change and improve how we do things not only every year but every quarter.”

With the reconstruction complete, Encana’s five-year plan to 2021 is to propel cash flow and grow production. Output from the core four, led by the Permian, is expected to double over that period.

“However…production growth is an outcome, not an objective,” the CEO said. “More importantly, we believe we can grow cash flow by over 300% in the next five years.” There’s also plenty of running room, with as many as 10,000 “premium” onshore drilling targets, defined as least costly, most profitable.

“Over the course of the plan, we expect to only consume 15% of our 10,000 premium-return locations,” Suttles said. “These are wells that deliver a 35% after-tax return or greater,” at a flat $50/bbl West Texas Intermediate oil price and a flat $3.00/Mcf New York Mercantile Exchange gas price.