Alberta and Saskatchewan oil producers stand to gain committed customers, reliable tolls and shipping capacity growth from the hotly contested service overhaul proposal for their chief conduit to markets across Canada and the United States, according to Enbridge Inc. 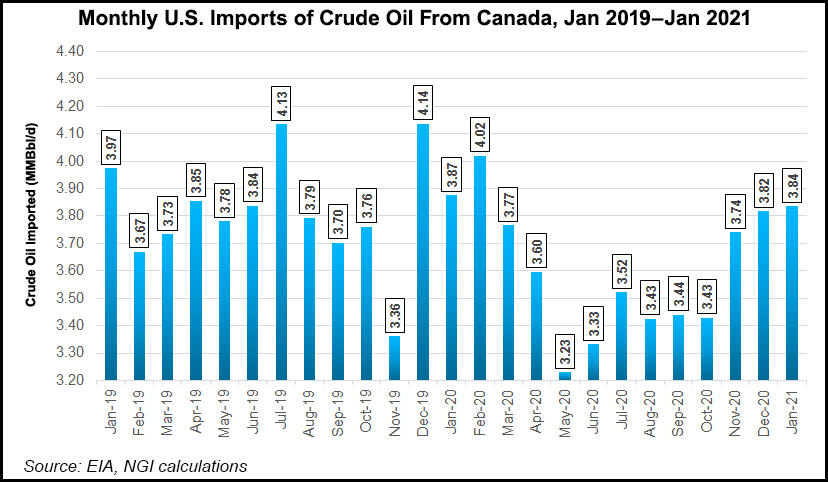 The Calgary pipeline conglomerate predicted the benefits in a 94-page response to industry furor ignited by its plan to convert 90% of its 2.9 million b/d Mainline to years-long delivery contracts from monthly common carrier bookings.

The reply ends a year of written salvos before an estimated five weeks of oral hearings on the switch, scheduled to start May 19 before the Canada Energy Regulator (CER). Critics have inundated Enbridge with more than 3,000 questions.

“Contracting on the Canadian Mainline meets the demands of shippers for long-term certainty of access to capacity and for long-term tolling stability,” said Enbridge. “The Mainline contract offering is supported by parties that ship in excess of 75% of the volumes.”

Evolving Canadian and U.S. climate change policies, plus 960,000 b/d of expansions now under construction by Trans Mountain Pipeline and Enbridge Line 3, call for the Mainline to adapt by ending the 70-year-old common carrier tradition, it said.

The Covid-19 pandemic, combined with slow action to cut a global supply glut by the Organization of the Petroleum Exporting Countries, provided a 2020 foretaste of oil traffic loss liable to exert upward pressure on common carrier tolls, Enbridge noted.

“The Mainline became the swing pipeline” from the Western Canada Sedimentary Basin,” it said. Throughput decreased by approximately b/d in 2Q2020 and 300,000 b/d in 3Q2020. However, other contracted pipelines, including Keystone XL, “remained highly utilized.”

Enbridge did not reject an observation by a critic of Mainline contracting, the 170-company industry association Explorers and Producers Association of Canada. Ten of 15 declared conversion supporters are U.S. refiners or their marketing arms. Of five Canadian firms that support the change, three have corporate affiliations with U.S. refineries.

“It could well be that if Mainline contracting is approved, it is primarily parties with refining interests and parties including producers that have downstream pipeline capacity that will contract for service on the Mainline,” said Enbridge.

“But this would not be a ‘redistribution of the pie.’ This would be entirely consistent with the current and past usage of the Mainline under the 100% uncommitted service structure.”

“There are now many different scenarios about how energy futures might unfold, and the large differences in the projections underscore the uncertainty about what the actual future conditions will be.”

Enbridge “does not intend to invest in expansions without having certainty that the existing Mainline capacity will continue to be demanded by shippers. Mainline contracting would provide that needed certainty.”

Enbridge added that the Mainline conversion plan’s fate affects shipping and storage capacity projects now in commercial planning stages for the Flanagan South, Seaway and Southern Access Extension links on the U.S. side of its North American oil network.

“It will take at least six months between CER approval of Mainline contracting and its implementation. As a result, market participants will have ample time to adjust their buying and selling strategies,” Enbridge noted.