Empire Petroleum Corp. has boosted its holdings in North Dakota by expanding its existing interests in the Williston Basin and entering a play in the Birdbear formation. 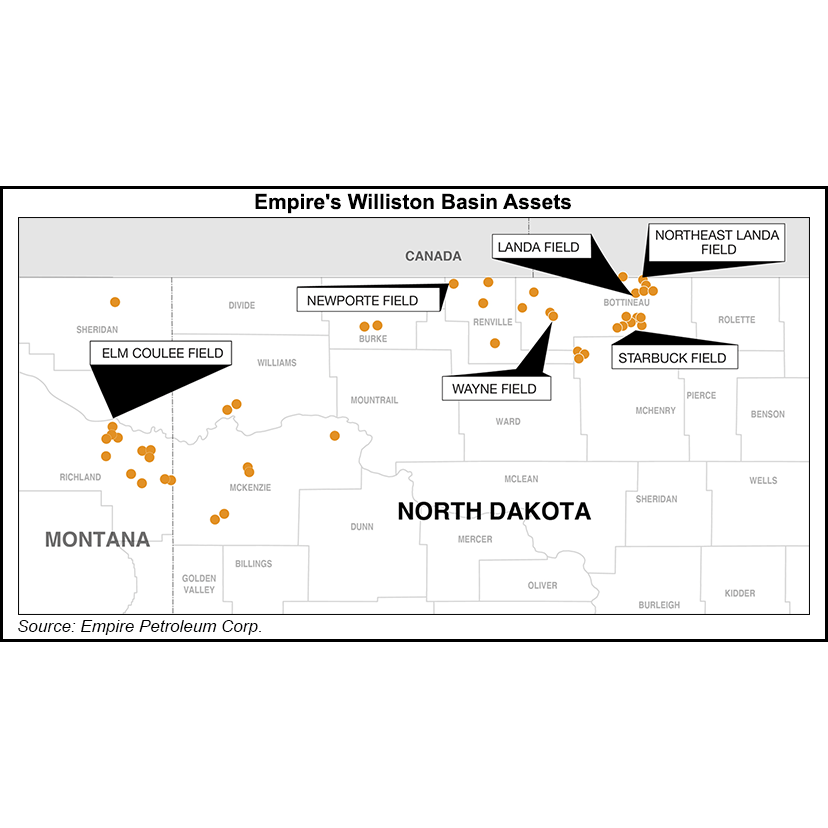 The Tulsa-based exploration and production company completed acquisitions earlier this month from an undisclosed firm for an undisclosed price. The deal could increase Empire’s net production in North Dakota by an estimated 24%, to around 9,250 boe/month.

Management said the transaction was funded with cash on hand. The acquired assets are in the Landa Madison and Landa West Madison units in Bottineau County. Also acquired were assets in the Birdbear area in Golden Valley and Billings counties.

CEO Tommy Pritchard said the acquisition is the latest step in a growth initiative in North Dakota underway since 2019. By combining the Landa Madison acreage with its interest in the Landa West Madison unit, Pritchard said Empire could create one field that “has the potential to grow and become one of our larger producing assets in North Dakota.”

Empire, which also operates in Louisiana, Montana, New Mexico and Texas, said the acquisition included 2,482 net acres, which also doubled its position in the Landa field. When combined, the company estimates original oil in place could be around 6.5 million bbl.

“Additionally, the Devonian Birdbear formation holds great promise for Empire as an area that has all the criteria that our team looks for in oil and gas assets,” Pritchard said.

President Mike Morrisett said the company has been focused on adding to its “long-life and low-decline reserves” while keeping debt low, which has meant typically jumping on “bolt-on transactions” that complement Empire’s current operations. Empire reported the new assets could add an estimated 700,000 boe over their lifespan.

While Birdbear is a potential play, Pritchard said it met Empire’s requirements because it “has similar attributes to those found on the Eastern flanks of the Williston Basin in Bottineau County and can be easily operated from our current North Dakota infrastructure.”

Both natural gas and oil production in the Bakken Shale are expected to be up by the beginning of May, according to the Energy Information Administration. During the month of April, gas output from the Bakken is estimated to increase by 27 MMcf/d and oil could increase by 17,000 b/d, the agency said.