Electrification alone will be insufficient to decarbonize the energy sector, said speakers at the LDC Gas Forums Northeast event in late July. 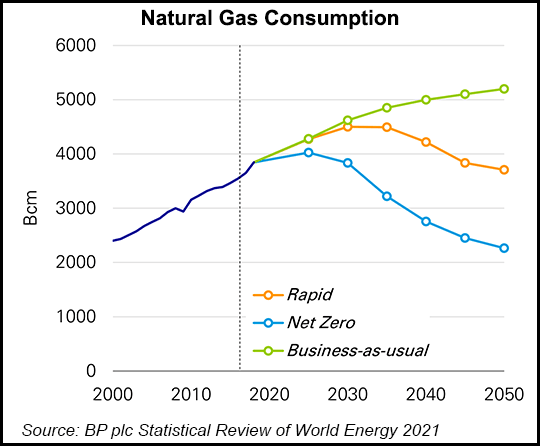 Enbridge Inc.’s Steve Elliott, director of business development, told the Boston conference that about 80% of the world’s energy is currently consumed as a molecule, with the remaining 20% consumed as an electron.

He explained that, “replacing all of this molecule-based consumption with electricity while maintaining redundancy [and] reliability that gas provides during peak load in particular, will be extremely challenging to do both economically and practically.”

Therefore, the natural gas industry must decarbonize the molecule-based share of energy production and consumption in order to achieve climate change targets.

“[Electrification] sounds like a simple solution, but…it’s not practical, as we have to consider the infrastructure impacts to support electrification,” said Elliott’s colleague Jason Gillett, director of gas supply for Enbridge Gas Inc.

As an example, Gillett said that electrifying Ontario’s residential heating segment alone would require some $30 billion of investment in the province’s electric distribution infrastructure, “and it would take decades to achieve that, at great cost to our customers.”

He explained that even in the deep decarbonization scenarios modeled in BP’s last Annual Energy Outlook, natural gas maintains a sizable share of global primary energy demand through 2050.

There are two main reasons for the resiliency of natural gas in BP’s rapid decarbonization scenario, Cohen said. One is the combination of natural gas with CCUS, either as a direct source of energy or to produce blue hydrogen – i.e. splitting hydrogen from natural gas and capturing, storing or utilizing the carbon dioxide left over.

“The other source, and the other role that natural gas plays over the long-term in the energy transition…is as a source of decarbonizing the power sector in developing economies,” Cohen said.

In power generation specifically, Cohen said that “although gas’s role is challenged in some of those deep decarbonization scenarios over the long-term, there is a limit for renewable energy plus batteries.”

Elliott cited numerous applications for hydrogen in the energy system.

“Hydrogen, like natural gas, is a versatile molecule,” Elliott said. “It can be used as energy directly or as a feedstock.”

He added, “There are parts of our economy that will be difficult if not impossible to electrify…these would be industrial sectors requiring high heat like steel, cement, glass manufacturing, or long-distance heavy-haul transportation like trucks, trains, marine shipping and aviation, to name a few.”

Hydrogen offers a clean-burning solution for these hard-to-electrify sectors, Elliott said. In addition, it can be used as a store for renewable electricity to minimize curtailment or for seasonal demand variation.

On top of that, Elliott said, hydrogen can be converted to replace fossil-derived fuels and feedstocks such as methane, i.e. natural gas, along with jet fuel, ammonia, methanol and others.

“Unlike energy stored in batteries, energy stored as hydrogen does not deplete while waiting to be used,” Elliott noted, “making it much more flexible for longer durations.”

Today’s gaseous fuel system “can and should play an important role alongside electrification in the energy system of the future,” Elliott said. “In fact, because of the lower carbon intensity of some of [hydrogen] or the negative intensity of some RNG…it is possible to achieve a carbon-neutral pipeline supply without removing natural gas from the system.”

He added, “This blend of natural gas, RNG and hydrogen can result in a pipeline supply aligned with emissions targets while maintaining, importantly, the reliability and affordability of today’s energy system.”

Elliott said that introducing a 1% hydrogen blend to the entire U.S. gas system would require production of more than 700,000 tons of hydrogen annually, and if sourced solely from renewables, about 9 GW of power to produce it.

“Broadly adopted, low-percentage blending could single-handedly provide the critical mass to kickstart low-carbon hydrogen in the United States,” he said.