The U.S. Energy Information Administration (EIA) on Thursday reported an injection of 66 Bcf into storage for the week ending Sept. 18, comfortably below the low end of analyst estimates and reinforcing a morning rally for Nymex natural gas futures. 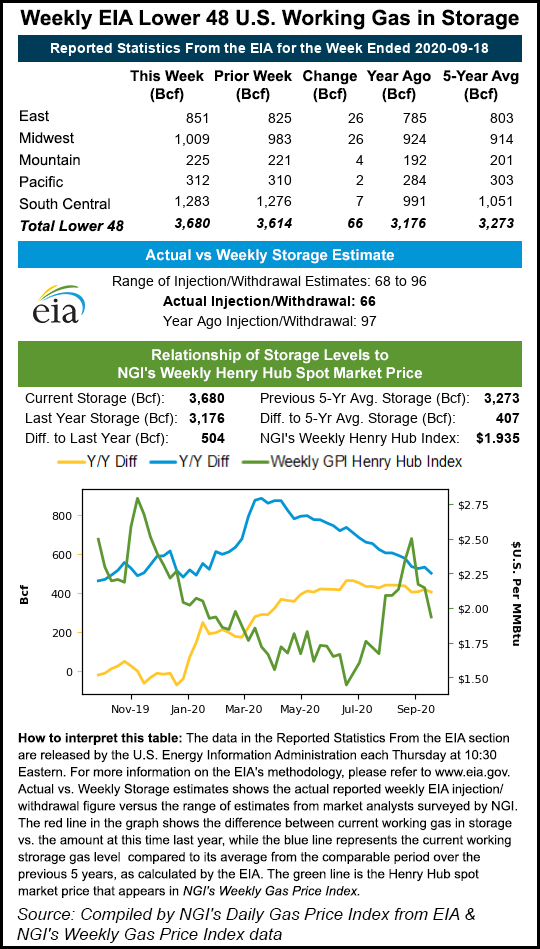 Prior to the report, a Bloomberg survey found estimates ranging from 68 Bcf to 82 Bcf, with a median of 77 Bcf, while estimates in a Wall Street Journal poll ranged from 71 Bcf to 85 Bcf, with an average of 77 Bcf.

A Reuters poll showed estimates ranging from 68 Bcf to 96 Bcf, with a median of 76 Bcf. NGI projected an injection of 71 Bcf for this week’s report.

Analysts said the latest injection reflected favorable weather-driven demand, with hotter than normal conditions over the Northwest and Southeast during the covered week, along with intense heat in the West and Southwest. Also credited were improved liquefied natural gas volumes and production impacts from an active stretch of storm activity in the Gulf of Mexico.

By region, the Midwest and East regions led with twin builds of 26 Bcf, according to EIA. The South Central injection was 7 Bcf into nonsalt facilities only, and no net build in salts.  Mountain region stocks increased by 4 Bcf, while Pacific inventories increased by 2 Bcf.

Looking ahead to the injection for the week ending Friday (Sept. 25), participants on The Desk’s online energy platform Enelyst cited early forecasts for around 85 Bcf. However, given this week’s report, some predicted downward revisions.

Assuming seven weeks left in the traditional storage season, an average weekly injection of 45.71 Bcf would put storage on track to hit 4.0 Tcf, a threshold at which containment could become challenging.