The Energy Information Administration (EIA) on Wednesday said domestic natural gas consumption is on track to grow this year, while marketed production will slow. 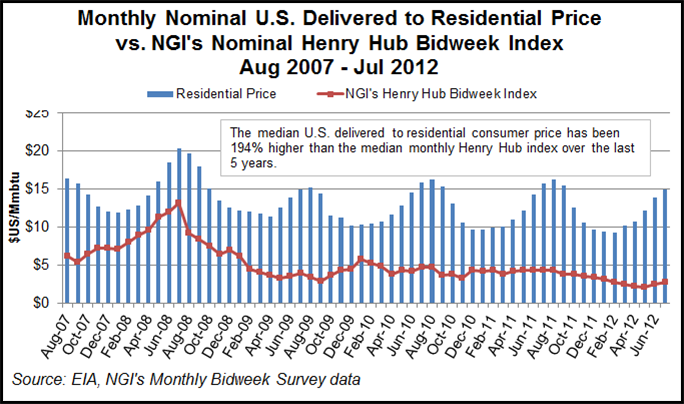 Projected total gas demand is likely to fall by 0.2 Bcf/d in 2013, according to the federal agency. “Although projected higher natural gas prices contribute to a 10.4% decline in forecast natural gas consumption in the electric power sector in 2013, consumption in the power sector next year is still expected to be about 1.9 Bcf/d higher than 2011 levels and high by historical standards,” the agency said.

Total marketed production of gas grew by 4.8 Bcf/d (7.9%) in 2011. But the EIA forecasts that total marketed production growth will slow to 2.6 Bcf/d this year (to 69.76 Bcf/d) and 0.4 Bcf/d in 2013, as the reduction in drilling activity is offset by growth in production from liquids-rich gas areas such as the Eagle Ford and wet areas of the Marcellus Shale, and associated gas from the growth in domestic crude oil production.

The EIA said households heated with natural gas are expected to spend an average of 15% more this winter than last year due to the anticipated colder heating season, slightly higher residential gas prices and an increase in demand. Interestingly enough, the median U.S. delivered to residential consumer gas price has been 194% higher than the median monthly Henry Hub index over the last 5 years, according to the EIA and NGI‘s Monthly Bidweek Survey data.

The agency said it expects U.S. households — one-half of which use natural gas as their primary heating fuel — to spend an average of $89 more this winter, reflecting a 1% increase in the average residential price from last winter and a 14% hike in consumption if near-normal (cold) temperatures materialize for the upcoming winter. Winter was unseasonably warm last year, resulting in little additional demand. Going into the winter heating season, which starts Nov. 1, EIA expects gas inventories to be at a record high: 3,903 Bcf.

The EIA’s projection on winter gas demand mirrors one earlier this month by the Natural Gas Supply Association (NGSA), which estimated that gas consumed by residential and commercial customers this winter would likely increase by 16% due to the anticipated colder weather. According to the National Oceanic and Atmospheric Administration’s most recent projection of heating degree days, the Northeast, Midwest and South will be about 2% warmer than the 30-year average, but still 20% to 27% colder than last winter, while the West is projected to be only about 1% colder, the EIA said.

The EIA report is bad new for consumers, said Thomas Pyle, president of the Institute for Energy Research, who said it “confirms that American homeowners will now face a worst-case scenario for energy prices this winter.”

Liquefied natural gas (LNG) imports are expected to fall by about one-half this year from 2011. An average of about 0.5 Bcf/d will arrive in the United States (mainly at the Elba Island terminal in Georgia and the Everett terminal in New England) both this year and next, to “either fulfill long-term contract obligations or to take advantage of temporarily high local prices due to cold snaps or disruptions,” according to the EIA. “Higher prices for LNG, particularly in Asian markets, have made the United States a market of last resort for LNG suppliers,” it said.

Pipeline gross imports will fall by 0.2 Bcf/d this year as domestic supply continues to displace Canadian sources, the agency said. It expects little change in 2013.