The Henry Hub spot price for natural gas is expected to increase to $4.00/MMBtu next year, compared with an estimated $3.71/MMBtu this year and an average $2.75/MMBtu in 2012, according to the U.S. Energy Information Administration (EIA). Those projections are both higher than EIA had expected last month, when it estimated 2013 to be $3.68/MMBtu and 2014 to be $3.91/MMBtu (seeDaily GPI, Sept. 11). 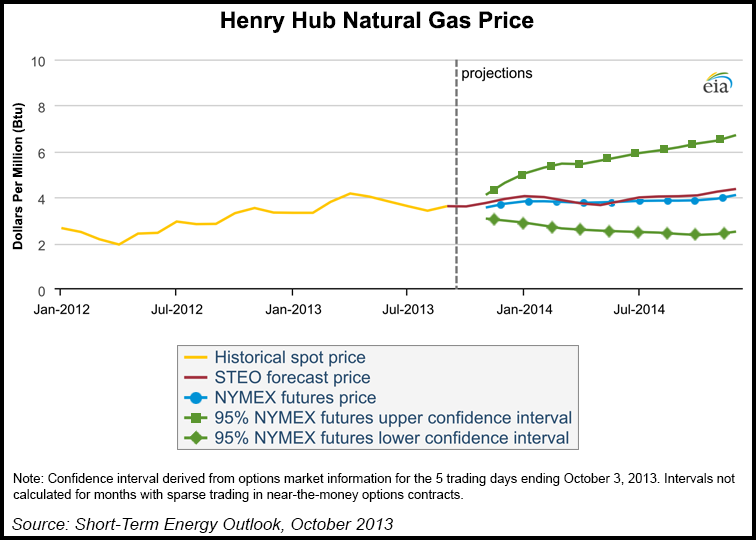 Henry Hub spot prices averaged $3.62/MMBtu in September, up 19 cents from August, EIA said in its Short-Term Energy and Winter Fuels Outlook, which was released Tuesday. “While prices declined from April through August, they began increasing last month in anticipation of winter heating demand,” said the agency.

Gas futures prices for January 2014 delivery (for the five-day period ending Oct. 3) averaged $3.83/MMBtu. Current options and futures prices imply that market participants place the lower and upper bounds for the 95% confidence interval for January 2014 contracts at $2.91/MMBtu and $5.04/MMBtu, respectively. At this time one year ago, the gas futures contract for January 2013 averaged $3.84/MMBtu, and the corresponding lower and upper limits of the 95% confidence interval were $2.77/MMBtu and $5.31/MMBtu, EIA said.

Households heating with natural gas will spend an average of 13% more this winter than last year, “significantly higher than last winter…[but] still lower than the previous five-year average,” EIA said. That’s a steeper increase than predicted by the American Gas Association (AGA), which expects gas bills to be no more than 5-10% more than last year (see Daily GPI, Oct. 2). An abundant supply of domestic natural gas has contributed to lower production prices that, combined with robust storage levels, are poised to help ensure a steady supply at a lower cost than other home heating fuels, AGA said in its recent Winter Fuel Outlook.

Average U.S. household expenditures for propane this winter heating season will increase by 9% compared to last winter, while electricity and heating oil costs are expected to increase 2% each, EIA said.

Residential use of natural gas, which is the sector most sensitive to weather impacts, was 3,470 Bcf last winter, according to EIA data. That was up significantly from 2,989 Bcf in 2011-2012, the low point for residential consumption over the past five years. U.S. residential natural gas consumption during winter months has averaged 3,410 Bcf since 2008-2009.

Colder winter temperatures this year, compared with record-warm temperatures last year, are expected to increase the amount of natural gas used for residential and commercial space heating, but projected year-over-year increases in gas prices will contribute to declines in gas used for electric power generation, from 25.0 Bcf/d in 2012 to 22.1 Bcf/d this year and 21.6 Bcf/d in 2014, EIA said. Total natural gas consumption, which averaged 69.7 Bcf/d in 2012, will average 70.0 Bcf/d and 69.4 Bcf/d in 2013 and 2014, respectively, the agency said.

Weather Services International (WSI) has said it expects temperatures nationally to average cooler than normal from the Northern Plains into the Ohio Valley over the next three months, with above-normal temperatures elsewhere, particularly across portions of Texas and the Southwest (see Daily GPI, Sept. 25). And an early look at indicators suggests that later winter months may be characterized by more widespread cold, WSI said. Forecasters at the Farmers’ Almanac have said they expect the upcoming winter will be colder than normal for most of the United States (see Daily GPI, Aug. 27).

There was 3,487 Bcf of natural gas in storage for the week ending Sept. 27, 155 Bcf less than a year earlier but 49 Bcf more than the five-year average, according to the latest EIA Weekly Gas Storage Report.

EIA and the National Association of State Energy Officials on Monday postponed the 2013-2014 Winter Fuels Outlook Conference, which had been set for Tuesday, rescheduling the conference to Nov. 1 (see Daily GPI, Oct. 8).