Eclipse Resources Corp. revealed Thursday that “substantially lower commodity prices” led to a 58% writedown of its proved reserves as of Dec. 31 compared to 2014 year-end reported values. 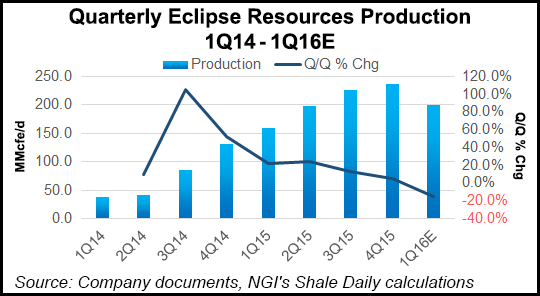 The Ohio pure-play exploration and production (E&P) company, based in State College, PA, said the pre-tax present value discounted at 10% of the Dec. 31 proved reserves was $212.9 million, 58% lower than the year-ago value of $509.4 million.

The company said the value calculations are based on Securities Exchange Commission (SEC) prices that “are not indicative of current forward prices.”

Eclipse said it also expects to record a $750-850 million impairment charge on some of its oil and gas properties in Ohio for 4Q2015 as a result of the drop in commodity prices. The company said it “does not anticipate that the expected impairment will result in a violation of any financial covenants associated with the company’s senior secured revolving credit facility or senior unsecured bonds.”

Eclipse has scheduled its 4Q2015 earnings call with investors for March 3 at 10 a.m. EST.