An estimated 4 Tcf of additional natural gas resources has been discovered offshore Egypt in what is becoming one of the most prolific resource areas of the world. 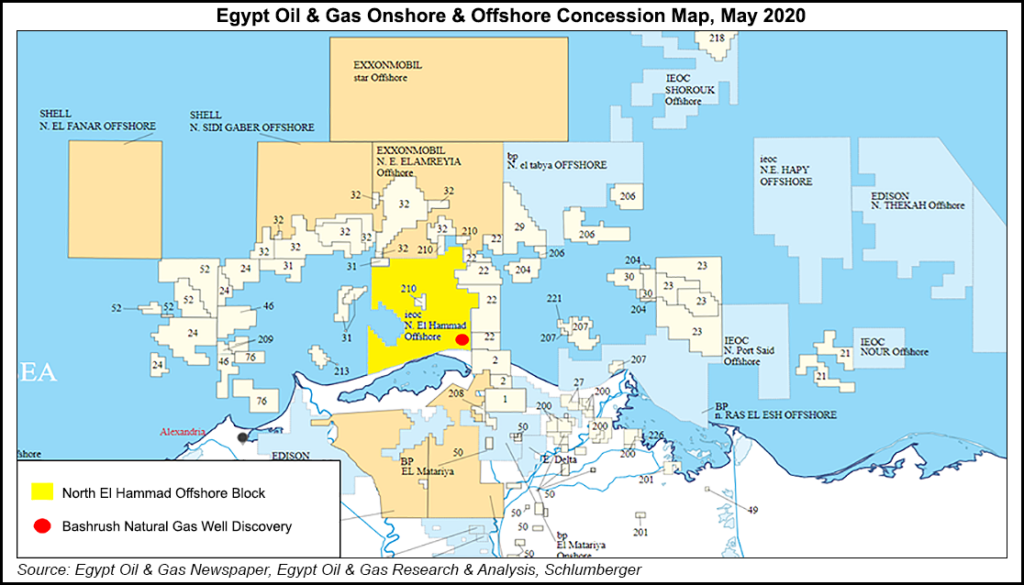 Operator Eni SpA and BP plc on Wednesday said a gas-heavy strike was made in the Nidoco NW-1 well in the Abu Madi West Development Lease. The discovery in the Nile Delta is in the so-called Great Nooros Area of the Eastern Mediterranean, aka the Eastern Med.

“Preliminary evaluation of the well results, considering the extension of the reservoir toward north and the dynamic behavior of the field, together with the recent discoveries performed in the area, indicates that the Great Nooros Area gas in place can be estimated in excess of 4 Tcf,” Eni said.

The Nidoco well is about three miles from the coast and 2.5 miles north of the Nooros field, which was discovered in July 2015. The well showed gas-bearing sands with a total thickness of about 100 meters (328 feet), Eni said.

About one-half of the gas-bearing sands are within the Pliocene sands of the Kafr-El-Sheik formations, with the other half within the Messinian age sandstone of the Abu Madi formations.

“In the Abu Madi formations, a new level, which was not yet encountered in the Nooros field, has been crossed, proving the high potential of the Great Nooros Area and the further extension of the gas potential to the north of the field,” said the Italian-based major.

In coordination with the Egyptian Petroleum Sector, Eni and BP plan to begin screening the “development options of this new discovery” using the “synergies with the area’s existing infrastructures.”

Eni, through subsidiary IEOC, holds a 75% stake in the license of Abu Madi lease, with BP holding a 25% stake. The operator is Petrobel, an equal joint venture between IEOC and state-owned Egyptian General Petroleum Corp.

The Eastern Med has seen an explosion of gas-rich discoveries in the past few years, some of which hold liquefied natural gas export potential.

In July, for example, Eni with partners BP and Total SE, said they successfully tested a well drilled on the Bashrush prospect offshore Egypt, expanding the possibility for exports.

ExxonMobil and partner Qatar Petroleum Co. last year announced a discovery offshore Cypress that could hold 5-7 Tcf. And Houston-based Noble Energy Inc. has made a big splash in the Eastern Med’s Leviathan and Tamar gas fields. The first phase of Leviathan, which began flowing in late 2019, is an estimated 22 Tcf development.