Despite scorching temperatures in store for the first week of July, a cooler long-term outlook squashed any hopes for a rally for natural gas bidweek prices, which posted steep 20- to 30-cent losses at the majority of market hubs. Hefty gains out West were no match for the overall weakness seen across the rest of the country, with the NGI July bidweek National Avg. tumbling 12.5 cents to $1.980. 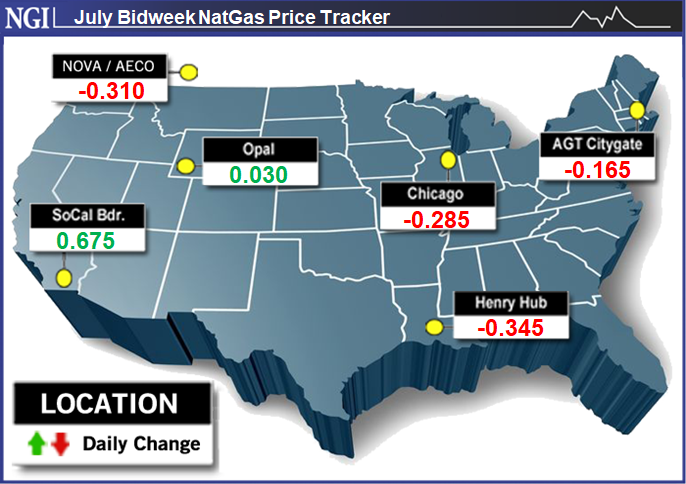 For comparison, July 2019 bidweek prices averaged 66 cents below year-ago levels, highlighting the lackluster demand so far this summer. While some heat was set to move across much of the United States this week and boost demand, the latest weather forecasts show more moderate temperatures arriving in the 11- to 15-day time period.

“This week remains easily the hottest that we have seen so far this summer, with widespread 90s in the eastern half of the nation, and even some spotty 100-degree highs in parts of the Southeast,” Bespoke Weather Services said.

In fact, the near-term heat helped Nymex futures last week recover more than half of the prior week’s losses, sending the July contract up nearly 12 cents on June 24. The July contract went on to expire Wednesday at $2.291. Henry Hub July bidweek prices also averaged $2.290 after falling 34.5 cents month/month.

However, the weather pattern is expected to begin its transition into next week. Although some lingering above-normal heat is expected in parts of the East in the first half of the week, by the end of the outlook period, Bespoke “favors a pattern cooler than what the models explicitly show, at least toward the Midwest, given the upper level pattern clues.”

NatGasWeather said some of the data continues to tease more impressive heat attempting to make a return July 14-15, but with additional evidence still needed if the markets were to expect it. “Since the latest data is only slightly changed compared to Friday’s, and since the July 8-13 period didn’t trend notably hotter, the coming pattern might still not be quite hot enough to satisfy, but it wouldn’t take much of a hotter trend to do so.”

Meanwhile, traders will also be looking to see if tightening in the supply/demand balance was observed in the weekend data as last Thursday’s Energy Information Administration (EIA) weekly storage report suggested, NatGasWeather said.

The EIA last week reported a 98 Bcf injection into storage inventories for the week ending June 21. The build far above last year’s 71 Bcf injection and the five-year 70 Bcf average, but snapped a string of triple-digit builds dating back to mid-May. It was also considered the tightest stat of the summer so far, according to analysts.

Broken down by region, a 35 Bcf injection was reported in the Midwest, and 27 Bcf was added in the East. The Pacific injected 11 Bcf, while stocks in the Mountain region rose by 9 Bcf. The South Central region reported an 18 Bcf injection, including a 1 Bcf withdrawal in salt facilities and an 18 Bcf build into nonsalts.

“The market does appear to be tightening as June gas production was down slightly, power burn has the potential to come in well above expectations given spot prices, and Mexico and liquefied natural gas (LNG) exports continue to ramp as new projects enter service, all of which could help push injections to more normalized levels as we progress through the summer,” Jefferies Equity Research said.

While a seasonal uptick in summer cooling demand in Mexico and the recent completion of the 2.6 Bcf/d Sur de Texas-Tuxpan pipeline are expected to lead to increased exports across the border this summer, a disagreement between Mexico’s Comision Federal de Electricidad (CFE) and Infraestructura Energética Nova (IEnova) puts the additional demand into question.

The $2 billion Sur de Texas-Tuxpan, developed by IENova in conjunction with TC Energy Corp., received injections of 138 MMcf on June 18 and 351 MMcf on June 19, but it has not received gas since, according to the pipeline’s electronic bulletin board.

IEnova indicated in late June that it had received an arbitration request from the CFE over issues related to force majeure clauses in the pipeline’s contract. The arbitration request, however, in “no way impedes the CFE from filing the certification of acceptance” which would allow for the delivery of gas to CFE, IEnova stated.

IEnova said it is working with the CFE to resolve the issue. CFE General Director Manuel Bartlett has said the company is seeking to renegotiate the take-or-pay natural gas transport contracts with TC, IEnova and other developers of pipeline projects, as the contracts are onerous and unfair to the state-controlled company.

Tudor, Pickering, Holt & Associates Inc. was modeling 0.7 Bcf/d of incremental Mexican exports by the end of June, and although Genscape Inc. has not changed its forecast for Mexican supply/demand or U.S. pipeline exports to Mexico, the firm is already generally regarded as “being on the conservative side of border flows.” Genscape had not expected flows to the Sur de Texas-Tuxpan pipeline to ramp up to commercial levels until the end of July.

At the same time that increased exports to Mexico have become murky, LNG export demand has also been called into question as global prices have fallen precipitously and storage inventories in Europe have swelled.

In fact, faltering LNG feed gas flows may have spooked bulls and contributed to the recent declines at Henry Hub, according to EBW Analytics. The firm noted, however, that many of the variations in gas flows at Cameron LNG in recent weeks “are likely the result of pre-commercial activity and not a reflection of market forces or insufficient demand at this juncture.”

Furthermore, EBW said elevated flows at the second train of Cheniere Energy Inc.’s Corpus Christi LNG export project “can provide a bullish indicator relative to our outlook through July and August.” The firm cautioned, though, that a potential slow-down in activity this fall from non-Cheniere-operated facilities remained likely.

For its part, DrillingInfo analysts said fundamental indicators remain bearish, although the coming week of demand may provide an indication of summer demand later in the season. “Any rally in the coming week near the $2.40 area will likely find sellers, and the lows from two weeks ago down to $2.151 will find buyers. The market remains range bound, with a negative bias,” analysts said.

The end of pipeline maintenance on the Natural Gas Pipeline Co. of America (NGPL) provided major uplift for July prices across West Texas, with every transaction executed during bidweek pricing above zero. Although some additional work on El Paso Natural Gas continued to restrict some flows and led to lower spot prices at the end of June, the end of the NGPL maintenance and stronger summer demand in California boosted bidweek deals.

“It would be fair to say that it has been a hectic few months for those navigating the tenuous market conditions in the region and closely watching for signs of relief,” said RBN Energy LLC analyst Jason Ferguson.

Indeed, the Permian Basin continues to labor under severe, perpetual transportation constraints for moving gas to downstream destinations. The dire situation has led to negative pricing throughout the basin on several occasions over the last year, a trend that is seen continuing until additional pipeline infrastructure is brought online.

That is expected to be this fall — and perhaps earlier if rumors are to be believed — when Kinder Morgan Inc. (KMI) brings its 2 Bcf/d Gulf Coast Express into service. Additional relief is expected when KMI’s Permian Highway begins commercial operations a year later, if all goes according to plan.

Meanwhile, the backers of the 2 Bcf/d Whistler pipeline decided in June to move forward with that project, which could enter service in 3Q2021.

Elsewhere across Texas, a series of weather systems that hit the state during the last week of June softened demand for major cities including Houston. With another round of wet weather on tap for early July, Houston Ship Channel dropped 26 cents to $2.335.

In the Midcontinent, most July bidweek prices tumbled 20-plus cents, although NGPL Midcontinent slipped less than a nickel to $1.645 with the end of maintenance.

Hefty 30-cent-plus decreases were seen across Louisiana and the Southeast, while most pricing hubs in the Midwest posted losses in the more than 20-cent range. Chicago Citygate plunged 28.5 cents to $2.100.

Despite the higher production levels, the level of future growth remains unclear as producers struggle under the weak price environment, analysts have said. Several exploration and production companies in Appalachia have already announced plans to trim budgets in an attempt to operate within cash flow, and the continued market weakness could lead to even deeper cuts.

“The end of spring pipeline maintenance may lift flows heading into summer, but production may not take the next step change higher until the Gulf Coast Express unleashes Permian supplies, likely in the early fall,” EBW said.

On the West Coast, Southern California markets remained volatile as weather conditions were unusually steamy for much of June. Although the heat had dissipated by the end of the month, ongoing pipeline import restrictions and lower hydro output expected for the rest of summer lifted July bidweek prices.