Dealmakers in late 2013 mostly were drawn to the Eagle Ford Shale in South Texas, where five mergers and acquisitions (M&A) led to $6.5 billion total in transactions, compared to the Marcellus Shale, where four captured $1.5 billion, a new analysis by PwC found. The Niobrara formation’s two transactions were valued at $1.2 billion, while two in the Utica Shale contributed $263 million. 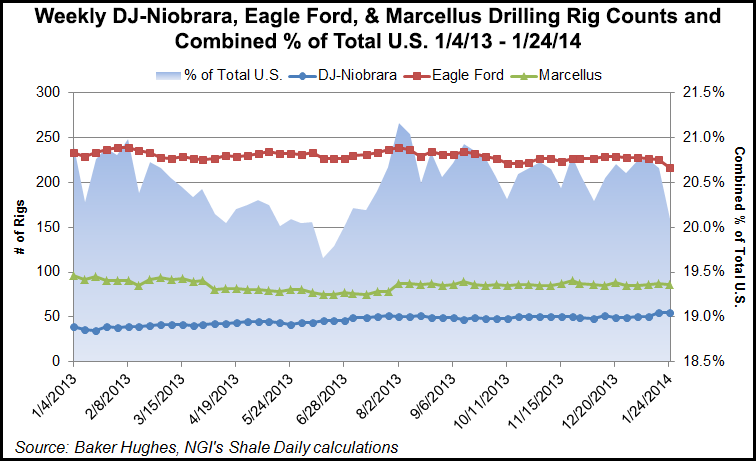 “In the fourth quarter of 2013, shale deal activity increased along with broader conventional industry activity, especially in the Marcellus Shale,” said PwC energy practice partner John Brady. “That basin bounced back in the quarter, as stronger performance per well has reinvigorated returns, driving additional interest in acreage in the Northeast.

“If shale plays continue to adapt more efficient production processes to optimize the play and improve returns, activity in unconventionals will continue to be robust.”

Twenty-seven transactions in 4Q2013 were related to unconventional plays, contributing a total of $23.8 billion — a 338% increase from 3Q2013. For the year, 79 unconventional transactions together were valued at $53.2 billion; there were two more shale-related deals than in 2012, when total values were $51.7 billion.

Overall, U.S. M&A activity has been robust for several years, he said.

Upstream deals accounted for 59% of the quarterly activity on 30 transactions worth $19.8 billion, almost half (47%) of total values.

Master limited partnerships (MLP) in 2013 were involved in 54 transactions — about 30% of all deal activity. That’s consistent with recent historic levels, PwC said.

“MLPs remain attractive investment vehicles because of their strong yields and efficient tax structures,” Meier said. “However, the pressures on MLPs to keep cash flows high and bring in new assets will keep these operators on the lookout for more acquisitions, including new dropdowns in the midstream space.”

Financial investors — private equities — continued to be keen on making deals in 4Q2013, resulting in 11 total transactions worth $10.6 billion, a 48% jump year/year.

Asset deals dominated in the latest quarter, with 42 contributing 82% of the total; together the transactions were worth $22.7 billion, or more than half of total values (54%). Nine corporate transactions in 4Q2013 represented almost half of all the deal values for the year, with $19.0 billion, versus 28 deals total in 2013 worth $38.4 billion.

Drilling rig counts in the DJ-Niobrara, Eagle Ford and Marcellus remained relatively stable throughout 2013 and made up about 21% of the U.S. total, according to Baker Hughes data.