Despite the commodities downturn that dogged Appalachian producers for most of 2016, natural gas production in Pennsylvania set another record last year when it increased 11% from 2015 to 5.1 Tcf, according to recently released data from the state Department of Environmental Protection (DEP). 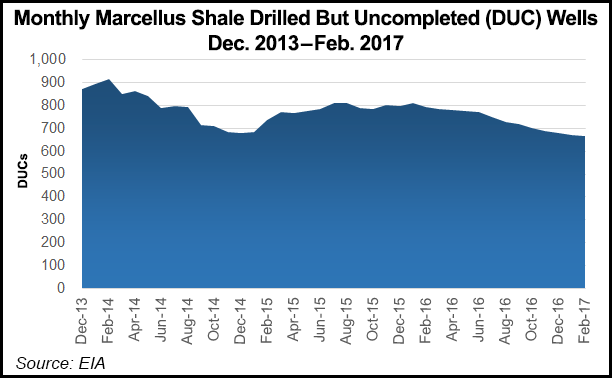 Shale producers relied heavily on a deep backlog of drilled but uncompleted (DUC) wells, focused on more economical dry gas and brought more deep, dry Utica Shale wells online. Production was up from 4.6 Tcf in 2015. It was also well above the 3.3 Tcf produced in the state in 2013, when shale formations helped propel Pennsylvania to the second-largest gas-producing state in the country behind Texas.

“2016 was heavy reliance on excess backlog in Pennsylvania and the rest of the Marcellus and Utica. You drew down your levels of backlog,” BTU Analytics analyst Matt Hoza told NGI’s Shale Daily. “[Producers] pulled heavily on stuff that was already drilled and possibly other stuff that was already completed and waiting on midstream tie-in. There was that access to relatively quick, cheap production that you can turn on to stave off that decline or when new infrastructure projects came on, you were able to draw on that investment that you already put in the ground to help grow production.”

Liquids production, however, was down across the board. State data shows that condensate production slid to 4.7 million bbl last year, down from 5.3 million bbl in 2015. Oil production in the state fell from 39,813 bbl in 2015 to 25,642 bbl in 2016. The production ratio indicated the broader shift to dry gas that became evident heading into 2016 as prices continued to slump.

“We’ve definitely seen producers move toward drier stuff as liquids prices have suffered and those natural gas liquids (NGL) uplifts that they used to get really turned into more of a liability,” Hoza said. “It was more economic to drill dry wells…If you look at NGL prices in 2016, we saw some recovery but it wasn’t that great. It cost more to process your NGLs out of the stream than you got back from them.”

It was in 2014 that operators began permitting wells and scheduling drilling to target the deep Utica outside of Ohio in West Virginia and Pennsylvania. The Keystone state’s first deep Utica test was in late 2014, and the DEP reported noteworthy but low production from the formation for the first time in 2015.

The Utica continued to marginally impact production in 2016, Hoza said, adding that there’s so few wells right now that it’s still being tested and volumes are ramping-up slowly. There’s only a few hundred million cubic feet of production per day currently being produced from the deep Utica in the state.

About 503 new unconventional wells were drilled in Pennsylvania last year, down from 785 in 2015 and a peak of 1,370 in 2014, according to the DEP. The Appalachian backlog heading into last year helped producers across the basin increase production during a year in which dry gas production across the Lower 48 fell for the first time since 2005. In its recent forecasts the U.S. Energy Information Administration said it expects a modest reversal this year, projecting that both Lower 48 crude oil and natural gas production willrisethis year and even more in 2018 as commodity prices firm.

Hoza said he expects production to continue rising in the Northeast, but by how much is still hard to tell. Much of that depends on when takeaway capacity will come online.

The Federal Energy Regulatory Commission approved a spate of major pipeline projects last month, including Atlantic Sunrise, Rover and Northern Access. The Commission also approved the Leach and Rayne Xpress projects earlier this year to get more Appalachian gas to market. Those projects are slated to come online later this year or early next.

“There’s a big question mark right now with Rover,” Hoza said. “We do expect production to grow [in 2017]. Rover is going to be the big driver of that for when new infrastructure comes online because at the end of the day you’re still essentially takeaway constrained out of the region. So [production growth] is really still reliant on when these projects come online.”

Rover is the largest of the recently approved projects, designed to carry 3.25 Bcf/d of Marcellus and Utica shale gas to Michigan, the Midwest and Canada. Energy Transfer Partners LP has an aggressive timeline for the project and is planning to hit its original in-service targets of partial service to Defiance, OH, by July and full in-service by November. Some of the project’s shippers and others have expressed skepticism about those dates.

“One would certainly think production will increase again this year,” said Thomas Murphy, director of Pennsylvania State University’s Marcellus Center for Outreach and Research. “There’s certainly more rigs running, there’s more frack crews on the ground and that could yield higher volumes in the end. At the same time, wells are declining. Whether one trumps another, I think that’s going to be the case, but it’s still early.”

Pennsylvania easily remains the largest producing state in the basin. Growth there continues to be driven largely by the Marcellus. But longer laterals, more Utica drilling, a rebound in the rig count, incremental takeaway and healthier spending over the last year have helped to keep production stable throughout the region, with natural gas increases anticipated again this year in Ohio and West Virginia as well.

“Gas prices are relatively higher than they were 18 months ago at least, so there’s value in turning some wells back on based on what the market is saying,” Murphy said. “I think the indicators are positive right now in the Marcellus and Utica. Also, a lot of it is going to be based on pipeline capacity constraints going away.”