An expansion of DT Midstream Inc.’s Louisiana Energy Access Project, or LEAP, is underway, with capacity set to climb to 1.7 Bcf/d, or by 70%. 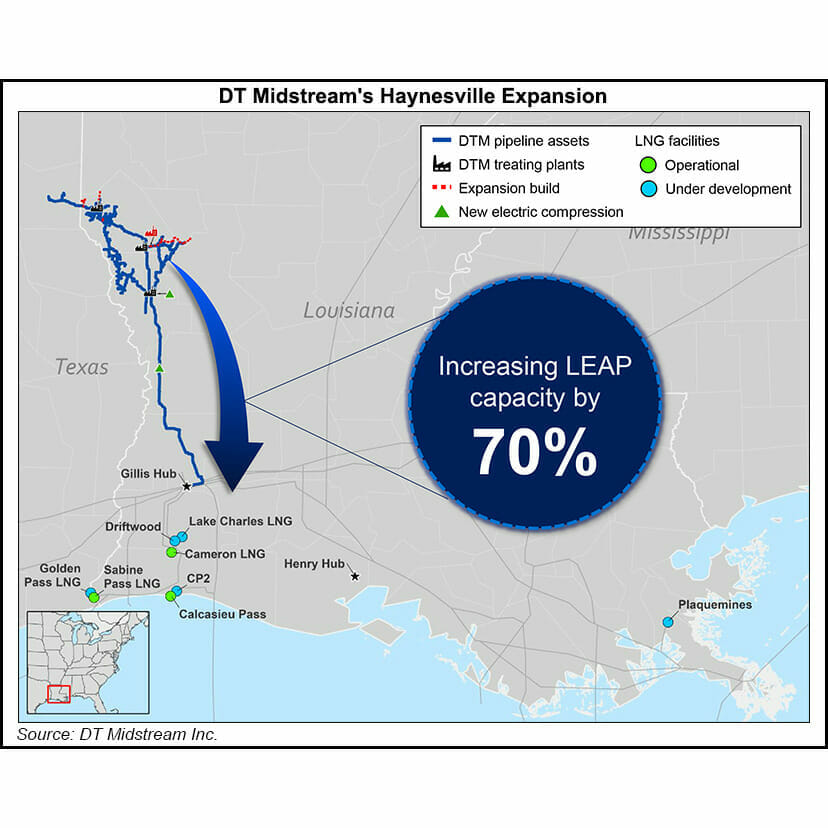 The executive team on Wednesday discussed the 150-mile, 36-inch diameter system, which now moves about 1 Bcf/d of Haynesville Shale supply in Louisiana to the Gulf Coast for industrial use and LNG exports.

CEO David Slater, during the second quarter 2022 conference call, said the final investment decision advancing the second phase “represents 400 MMcf/d of incremental capacity on LEAP. Phase two…will result in us expanding 70% from its current capacity of 1 Bcf/d to 1.7 Bcf/d.”

The LEAP expansion “is fully underpinned by long-term take-or-pay commitments,” the CEO said. “This expansion highlights our ability to timely add efficient increments of capacity to lead, providing a low risk economic pathway for our customers to access the attractive domestic and LNG export markets on the Gulf Coast.”

DTM, as it is known, plans to “achieve construction synergies with our phase one expansion, which will allow us to have the full 1.7 Bcf/d capacity in service by the first quarter of 2024.”

LEAP is expandable up to 3 Bcf/d, with looping and compression.

“We remain in active discussions with customers interested in capacity,” Slater said. “That will be part of the phase three expansion,” but details about future growth were not provided.

The calculation by DTM to build its natural gas capacity was boiled down by Slater to one simple statement.

“Due to the high level of long-term, take-or-pay contracts, 100% natural gas-focused, we expect domestic and global demand for natural gas to remain very strong for many years to come,” he said.

The Detroit-based midstreamer, which spun off from DTE Energy Inc. last year, is transitioning toward net zero greenhouse gas (GHG) emissions by 2050. The goal is to reduce by 30% its carbon emissions over the next 10 years.

LEAP, designed as a carbon-neutral system, fits within those ambitions. LEAP has receipt interconnects with the Blue Union Gathering System and delivery interconnects at the Gillis hub in Louisiana.

DTM is relying on electric compression supplied by renewable generation, and then using carbon capture and storage (CCS) technology to reduce the overall GHG footprint.

DTM also is emphasizing projects that feed into areas ripe for expansion, such as the Appalachian Basin. The Stonewall gas gathering lateral pipeline expansion was placed into service during the second quarter, Slater noted.

A new customer was added to the Stonewall system under a long-term contract during the latest period, “representing about 15% of the system’s capacity,” Slater said. “We continue to see strong interest for capacity out of Appalachia on Stonewall” as Nexus Transmission Pipeline takeaway constraints “remain an issue.” Another local distribution company also was added under a long-term agreement.

More CCS opportunities are on the design table, particularly in Louisiana. The company plans to file some Class VI injection well permit applications by the end of the year.

Slater was asked for his opinion about the Senate Democrats’ proposed Inflation Reduction Act of 2022. The legislation targets a nearly 40% reduction in GHG emissions by 2030, representing what is said to be the single biggest climate investment in U.S. history.

The legislation “is obviously fluid, based on what’s happening in Washington, so I’ll start by saying, it’s very constructive and we’re optimistic based on what we’re hearing,” Slater said. “I think the devil’s in the details here. But it’s definitely pointed in an optimistic and constructive direction.”

The proposed bill’s tax credit for CCS is improved, he noted. The credit in Internal Revenue Code Section 45Q is computed per metric ton of qualified carbon oxide that is captured and sequestered.

DTM’s LEAP “was viable under the existing 45Q structure, so any improvements to that structure will be obviously supportive to our plan,” the CEO noted. “I think as everyone appreciates, there’s a lot of projects and there’s a lot of movement around this…”

The board also declared a 64 cents/share dividend.