Dominion Energy Inc. has agreed to sell a 25% stake in its Maryland-based Cove Point liquefied natural gas (LNG) operation to Brookfield Asset Management Inc. in a deal valued at more than $2 billion, the company announced Monday. 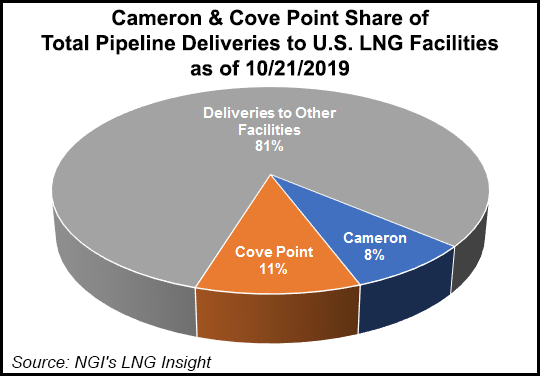 The deal is part of Richmond, VA-based Dominion’s plan to establish a permanent capital structure for subsidiary Dominion Energy Cove Point LNG LP, which owns an LNG import, export and storage facility on the Chesapeake Bay in Lusby, MD. Also under the Cove Point umbrella is a 136-mile pipeline connecting the facility to the interstate pipeline system.

Cove Point completed a $4.1 billion expansion in 2018 to enable exports, and the facility now provides liquefaction, gasification, transportation, storage and peaking services to customers in the United States, India and Japan.

The deal implies an enterprise value of $8.22 billion not including working capital, according to management. Dominion plans to use the proceeds for general corporate purposes and to reduce annual common equity financing.

Dominion would continue to retain full operational control of Cove Point after closing, which is expected by the end of the year. J.P. Morgan is acting as financial adviser to Dominion Energy while McGuireWoods LLP provided legal counsel. Kirkland & Ellis LLP served as counsel for Brookfield.

On Friday the Federal Energy Regulatory Commission’s (FERC) Office of Energy Projects granted a series of requests related to commissioning of the second train, including introducing hazardous fluids at some facilities.

The project, a joint venture of Sempra LNG, Mitsui & Co., Mitsubishi Corp., Total SA and NYK Line, started commercial operations at Train 1 in August. Two additional liquefaction trains are slated for start-up in the first half of next year, with total export capacity expected to reach 12 million metric tons per year, or about 1.7 Bcf/d.

Meanwhile, Commonwealth LNG, another export facility planned for the Louisiana coast, near Cameron, LA, announced Monday that FERC has outlined an environmental review schedule for the project.

FERC plans to issue a draft Environmental Impact Statement (EIS) for the 8.4 mmty Commonwealth LNG in May 2020, followed by a final EIS in October 2020. That would put the deadline for a federal authorization decision at Dec. 31, 2020.

Commonwealth LNG would include six LNG storage tanks, one marine loading berth and a 3.04-mile, 30-inch diameter pipeline to interconnect with existing intrastate and interstate pipelines to supply the facility.

LNG freight rates have more than doubled over the past month, a development that could potentially weaken global gas fundamentals, according to a recent note from analysts at Goldman Sachs. They said freight rates climbed to $120,000/day last week.

“While there has been a lot of focus on the recent sanctions imposed by the United States on Cosco Shipping Tanker (Dalian) Co. and Cosco Shipping Tanker (Dalian) Seaman & Ship Management Co., we believe contango-driven floating storage has also played an important role in the recent rise in freight rates, much like last year,” the Goldman analysts said.

Looking specifically at spreads for the Japan Korea Marker (JKM), the Goldman team observed that “once the contango is high enough to trigger an increase in floating storage, this ties up tankers, tightening the spot freight market.”

Increasing freight rates could incentivize market participants currently floating LNG to “simply discharge their cargo and lease their tanker out,” according to Goldman. “Although we have not seen this play out yet, this would potentially further weaken near-term global gas fundamentals in addition to helping offset some of the current tightness in the freight market.”

Even with continued high levels of floating storage and higher freight rates, JKM prices won’t necessarily see any upward pressure. This is because of oversupply in the Pacific basin, which Goldman analysts expect to continue over the next year or so under their base case.

“If the Pacific basin is oversupplied, higher freight rates should end up having little to no impact on LNG prices, since Asian LNG markets are not trying to attract incremental supply out of Europe,” the analysts said. “Further, depending on the scale of the excess supply in the region, JKM may end up compressing its spread” to Dutch TTF (Title Transfer Facility) prices to “not just below reload costs but well below such levels to send the signal to all Atlantic Basin suppliers to keep their LNG in the Atlantic Basin, much like last winter.”