Oil and gas producers continue to back Republican candidates in outsized fashion, but political contributions from the industry in the 2020 election cycle are running notably below 2016, a consequence of the coronavirus pandemic’s adverse financial impacts. 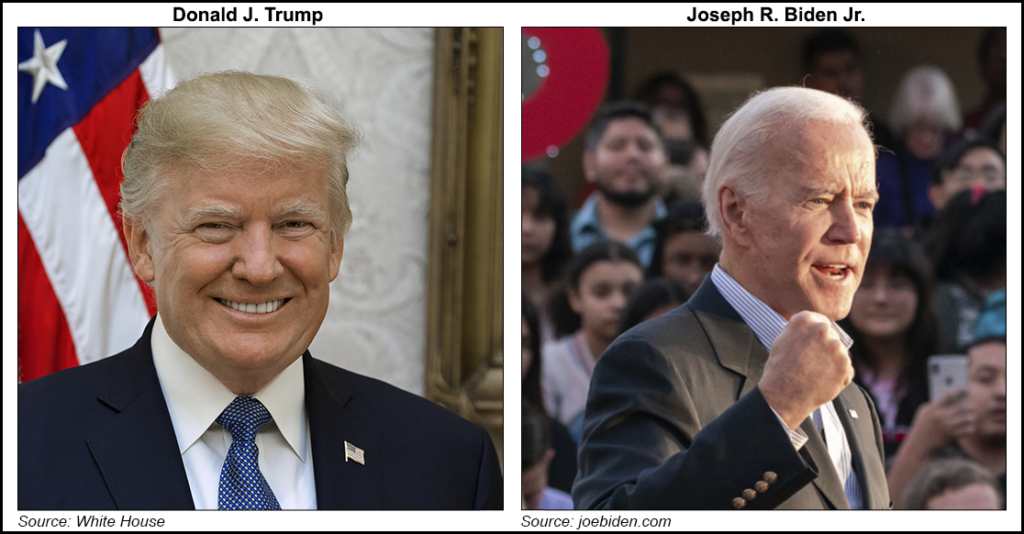 The oil and gas sector spent an estimated $87 million between Jan. 1, 2019, and Sept. 21 — the current election cycle — well below the $104 million donated in the prior cycle and only weeks remain before the Nov. 3 election. That is according to the Center for Responsive Politics (CRP), a nonpartisan organization that tracks political donations based on data released from the Federal Election Commission.

Among more than 80 sectors the CRP follows, oil and gas ranks 12th in political donations in the current cycle so far, down from No. 9 in the 2016 cycle.

The decline aligns with the steep revenue drops that the energy sector endured last April and May – and into the summer months for many companies – as the pandemic limited economic activity and travel, depleting oil and gas demand.

“The one-two punch of a pandemic and economic recession does not create an ideal environment for political fundraising,” said Sarah Bryner, research director at the CRP.

However, overall political spending in the current cycle is expected to reach record highs, according to the center.

The total cost of the 2020 election is projected by the CRP to hit $10.8 billion, easily eclipsing the previous election spending record, set in 2016. The estimate is more than 50% pricier than the 2016 contest when adjusting for inflation. Spending in the presidential race alone is projected to top $5 billion.

The current cycle “is going to absolutely crush anything we’ve ever seen — or imagined — before,” said Sheila Krumholz, the CRP’s executive director.

The organization’s estimate for 2020 is based on activity so far and late-stage spending in previous cycles. The center noted that late influxes of campaign cash could push the final total even higher.

Though lower in terms of total donations this cycle, the oil and gas industry continues to support Republicans far more than Democrats, with 85% of donations going to GOP candidates as of the latest CRP assessment, as has long been the case.

President Trump has worked to foster that support with a corporate tax cut and ongoing regulatory rollback efforts. Recently, the Trump administration lifted methane regulations for the energy sector, advanced lease sales in the Alaska National Wildlife Refuge and modified the Clean Water Act to speed up environmental reviews of infrastructure projects. All face legal challenges.

The president also routinely touts his decision to withdraw the United States from the United Nations climate accord, the international deal to reduce emissions of planet-warming gases.

Trump’s Democratic opponent, former Vice President Joseph R. Biden Jr., has vowed to rejoin the climate accord, bar new drilling on federal property and transition the country from fossil fuels to renewable energy sources over many years with a $2 trillion infrastructure and clean energy plan.

While Trump and the GOP enjoy broad support from the domestic oil and gas sector, the CRP said Democrats are outspending their political rivals overall.

Even after removing unprecedented spending by the presidential campaigns of billionaires Mike Bloomberg and Tom Steyer, the CRP said, Democrats account for 54% of total spending in the current cycle. Republicans make up 39% of the spend.