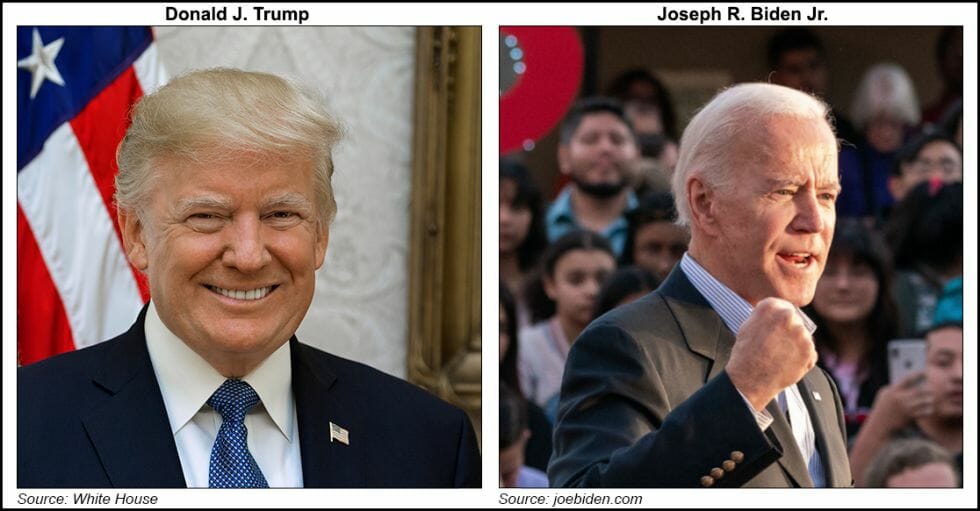 During the first of three scheduled debates Tuesday night at Case Western Reserve University in Cleveland, the Republican incumbent and Democratic nominee were pressed by Fox News anchor and moderator Chris Wallace to make clear their respective positions on “the science of climate change.”

What followed in a roughly 10-minute exchange did little to amplify the policy positions of either candidate. However, the discussion did punctuate a sharp divergence between the two — both their worldviews and approaches to the campaign.

Climate change functioned as “a wedge issue that the candidates used to illustrate differences from one another,” Clearview Energy Partners LLC wrote in a post-debate note.

The president defended his deregulation policies and touted efforts to ease emissions rules to make vehicles more affordable. Wallace, as part of an often-ineffective effort to keep the president on subject, urged him to explain the logic of relaxing fuel economy standards intended to minimize pollution at a time the world faces pressing climate challenges that global energy companies and other industry leaders are trying to combat.

The president responded that fewer emission standards would “double or triple” auto sales, though he did not cite evidence. “You’re talking about a tiny difference” between gasoline-fueled and electric-powered cars, he said. He labeled California Gov. Gavin Newsom’s recent executive order to phase out the sale of gasoline-powered cars by 2035 as “crazy.”

The Trump campaign has lauded the administration’s work to overturn regulations and open paths for increased oil and gas drilling. Recently, it lifted methane regulations for the energy sector, advanced lease sales in the Alaska National Wildlife Refuge, and modified the Clean Water Act to hasten environmental reviews of infrastructure projects. All face legal challenges.

Pressed on climate change and whether he agreed with most scientists that it is caused by humans, Trump said, “I think to an extent yes,” and also said “a lot of things do.” He added: “I want beautiful, clean air.”

Addressing wildfires that have scorched millions of acres throughout the West Coast in recent weeks — said to be the most destructive wildfire season in California’s recorded history, and to which Newsom has blamed climate change — Trump attributed fire intensity in large part to failing forest management practices. In California, more than half of the state’s forests are federally managed.

“Every year, I get the call: California is burning,” Trump said. “If that was cleaned, if you had forest management, you wouldn’t be getting those calls.”

The president also praised his administration’s decision to withdraw the United States from the United Nations climate accord, the international deal to reduce emissions of planet-warming gases. Former President Obama, with Biden as his No. 2, helped negotiate the landmark agreement and put in place many of the energy regulations that Trump has since attempted to dismantle.

“It was a disaster from our standpoint,” Trump said of the agreement.

During the debate, Trump also repeatedly attacked Congressional Democrats’ Green New Deal, which the president falsely claimed Biden supports. The president said the plan would cost $100 trillion and cripple entire sectors, including the oil and gas industry. “It would destroy our country,” Trump said.

Biden has called for a $2 trillion infrastructure and clean energy plan, one that he said would at once create jobs and combat what he called the devastating impacts of climate change. The plan would transition the country from fossil fuels to renewable energy sources over many years.

Biden also emphasized his goal to decarbonize the electric power sector by 2035.

In addition to opposition from many in the oil and gas lobby, the climate initiative faces several uncertainties. Among them is how to build long-distance transmission lines to move renewable energy and how to transition thousands of energy patch workers, and smaller employers dependent on oil and gas income, to jobs in alternative energy subsectors.

“We’re going to be in a position where we can create hard, good jobs by making sure the environment is clean and we are all in better shape,” Biden said.

The endeavor comes with a high price tag, he conceded, but one that pales in comparison to the costs of climate change.

Prior to the debate, Trump said Biden would ban hydraulic fracturing, aka fracking. The former vice president previously said that he would not bar fracking. Biden instead would oppose new drilling on federal land and support ongoing fracking as part of a transition to other forms of energy.

Biden made clear that, if he is elected, the United States would rejoin the UN climate accord, widely known as the Paris agreement. New energy initiatives, he said, would focus heavily on renewables.

Relative to much of the debate, the climate and energy exchanges were generally coherent and marked by intermittent interruptions.

Over a majority of the other 80 minutes, however, the president made it known his debate strategy was to talk over and belittle his rival to frustrate and stymie. Trump lobbed accusations against the Democrat and his family. He invoked Biden’s son, Hunter, repeatedly calling out his controversial work in Ukraine and his past drug abuse. Trump portrayed the elder Biden as a socialist who is ill-equipped for the White House.

Noting his opponent’s nearly five-decade career in Washington, Trump told the former senator and vice president that for “47 years you’ve done nothing.”

Biden largely maintained focus, though he was by turns distracted by Trump’s barrages and frustrated with the chaotic flow of the event.

“Will you shut up, man?” an incensed Biden said at one point. “It’s hard to get any word in with this clown.” At another stage, he called Trump “the worst president America has ever had.”

The two also argued about the president’s handling of the coronavirus pandemic, his calls to repeal the Affordable Care Act, when to fill the open Supreme Court seat, the validity of mail-in ballots, social unrest and racial inequality, among other key campaign trail topics.

Most pundits and observers said almost nothing material emerged from the exchanges. Instead, critical focus shifted to a debate structure that allows candidates to shout each other down and provides the moderator with few practical tools to keep the discussion on course.

“This debate is a chaotic mess,” tweeted Larry Sabato, director of the University of Virginia’s Center for Politics.

Ahead of the Nov. 3 election, the next presidential debates are scheduled for Oct. 15 and Oct. 22. Vice President Pence and the Democrat’s candidate Kamala Harris are set to square off on Oct. 7.