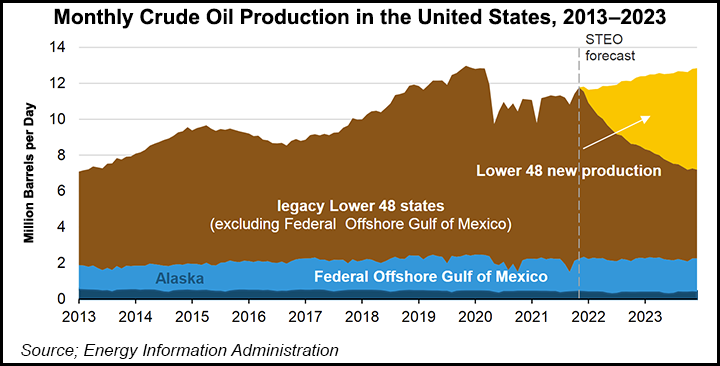 Travel fuel consumption – including demand for gasoline and diesel — is expected to accelerate further as spring weather arrives and the effects of the Omicron variant of the coronavirus ebb, Rystad Energy analysts said. This could play out domestically and globally, they said.

Over the past four-week period, demand averaged 22.1 million b/d, up by 12% from the same period a year earlier. Over that same span, motor gasoline product supplied averaged 8.6 million b/d, ahead 8%, while consumption of distillate fuel, including diesel, averaged 4.5 million b/d, up 5%. Jet fuel demand spiked 28% to 1.4 million b/d.

Production last week, meanwhile, was flat from the prior week and flat over the past month at about 11.6 million b/d. This reflects in large part publicly traded producers’ collective efforts to hold steady in maintenance mode amid investors’ calls to divert investments away from fossil fuels and toward renewable energy, despite lofty oil prices.

The inflows helped to curtail a months-long trend of declining inventories, with stocks last week inching higher. Supplies in storage, excluding those in the Strategic Petroleum Reserve, increased last week by 1.1 million bbl from the previous period. Still, at 411.5 million bbl, inventories were 10% below the five-year average.

He noted that OPEC and major oil producing countries that partner with the cartel are collectively struggling to ramp up output this year amid political strife and aging infrastructure. This could soon include Russia if it invades Ukraine as it has threatened to do for weeks. U.S. and European sanctions against Russia’s energy sector – threatened by U.S. President Biden in the event of war in Ukraine – could taper Russian oil exports and further cloud the supply/demand picture.

“The supply side of the equation remains highly uncertain,” Galimberti said.   Barclays analyst Amarpreet Singh noted that oil prices have surged more than 20% so far this year – after robust gains in 2021 – “and are trending at the highest level since 2014. We think the rally is rooted in fundamentals with a persistent supply deficit eating into record low inventory levels.”