The Department of the Interior (DOI)’s Bureau of Ocean Energy Management (BOEM) on Friday issued a five-year proposed program (PP) for offshore oil and gas lease sales during 2023-2028, although Interior Secretary Deb Haaland noted this does not necessarily mean lease sales will occur. 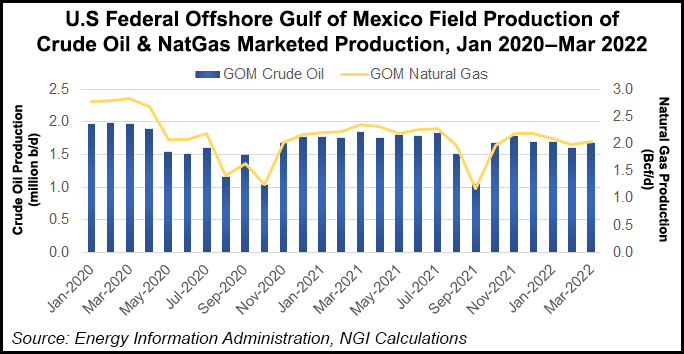 DOI is calling for a maximum of 11 lease sales for the period, comprising 10 in the Gulf of Mexico (GOM) and one in the Cook Inlet off south-central Alaska.

This is a substantial reduction from BOEM’s previous draft proposed program (DPP), which was released in 2018 under the Trump administration but never finalized. Under Trump, BOEM proposed 47 lease sales, including in the GOM and numerous areas offshore Alaska, as well as the Pacific and Atlantic coasts.

The 11 potential lease sales that made the cut for the latest PP were selected “because they have the greatest resource potential and net benefits with the least potentially significant impacts and costs to society to meet national energy needs under existing laws and policies, while acknowledging that progress along a net-zero emissions pathway is likely to change future energy markets and national energy needs,” BOEM said.

An official notice is scheduled for publication in the Federal Register on July 8, after which a 90-day public comment period would open for the latest (PP).

Following the public comment period, BOEM will prepare a proposed final program, which “may include fewer potential lease sales, including no lease sales,” according to DOI.

The Outer Continental Shelf (OCS) Lands Act requires DOI to prepare the five-year programs as a roadmap for upcoming leases. The industry had been urging the Biden administration to propose a new program as the previous one expired on June 30.

President Biden campaigned on a pledge to end new drilling on federal lands and in federal waters, but outcry and legal challenges from the industry have prevented an outright ban.

Haaland on Friday cautioned proponents of offshore leasing not to get their hopes up.

“A proposed program is not a decision to issue specific leases or to authorize any drilling or development,” she said. “From Day One, President Biden and I have made clear our commitment to transition to a clean energy economy.”

She added, “Today, we put forward an opportunity for the American people to consider and provide input on the future of offshore oil and gas leasing. The time for the public to weigh in on our future is now.”

“At a time when Americans are facing record high energy costs and the world is seeking American energy leadership, tonight’s announcement leaves open the possibility of no new offshore lease sales, the continuation of a policy that has gone on for far too long,” said API’s Frank Macchiarola, senior vice president of policy, economics and regulatory affairs. “Because of their failure to act, the U.S. is now in the unprecedented position of having a substantial gap between programs for the first time since this process began in the early 1980s, leaving U.S. producers at a significant disadvantage on the global stage and putting our economic and national security at risk.”

Analysts at ClearView Energy Partners LLC said the PP “does not look to us like a stand-down from Biden’s green agenda. We would not be surprised to see further winnowing to a smaller number of sales in the next stage.”

They added, “We also would not rule out future Secretarial cancellations of any sales scheduled in the final plan. And, even if Interior does not win its court fight for the reinstatement of President Biden’s ‘pause’ on federal oil and gas leasing, a deliberate finalization of today’s PP could result in a lag of two years between offshore lease sales.”