The Trump administration on Thursday proposed to throw out the rule book for offshore oil and natural gas drilling, expanding leasing to politically sensitive areas including the Pacific and Atlantic coasts. 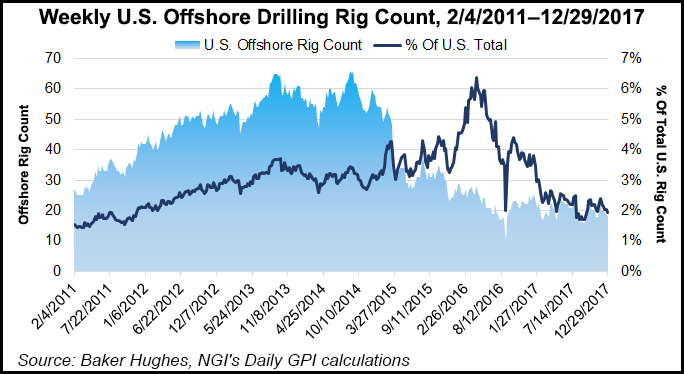 In a promised expansion of offshore drilling, Interior Secretary Ryan Zinke said nearly all of the nation’s Outer Continental Shelf (OCS) would be considered for energy development, including offshore Alaska, California, Florida and Maine, areas heretofore protected by state legislators and previous administrations.

The leaseholds under consideration in the draft OCS plan for 2019-2024 are far larger than envisioned in President Trump’s executive order issued last year that sought a new direction for offshore drilling rights. The order asked Zinke to consider expanding Atlantic and Arctic drilling.

The 2019-2024 draft proposed program (DPP) would make more than 90% of the total OCS acreage and more than 98% of the undiscovered, technically recoverable oil and gas resources in the federal offshore available for future exploration and development. By comparison, the final program in place had 94% of the OCS off limits, according to Zinke.

The proposal “lays out the options that are on the table and starts a lengthy and robust public comment period,” Zinke said. “Just like with mining, not all areas are appropriate for offshore drilling, and we will take that into consideration in the coming weeks. The important thing is we strike the right balance to protect our coasts and people while still powering America and achieving American energy dominance.”

The DPP includes 47 potential lease sales in 25 of the 26 planning areas, with 19 sales offshore Alaska, seven in the Pacific Region, 12 in the Gulf of Mexico (GOM), and nine in the Atlantic Region.

“By proposing to open up nearly the entire OCS for potential oil and gas exploration, the United States can advance the goal of moving from aspiring for energy independence to attaining energy dominance,” said Interior’s Vincent DeVito, counselor for energy policy at Interior. “This decision could bring unprecedented access to America’s extensive offshore oil and gas resources and allows us to better compete with other oil-rich nations.”

The DPP followed nearly 816,000 comments from state governments, federal agencies, public interest groups, industry and the public, Zinke noted. The 2017-2022 Five Year Program would continue to be implemented until the new program is approved.

“This plan is an early signal to the global marketplace that the United States intends to remain a global leader in responsible offshore energy development and produce affordable American energy for many decades to come,” said Interior’s Katharine MacGregor, principal deputy assistant secretary for Land and Minerals Management. “This proposed plan shows our commitment to a vibrant offshore energy economy that supports the thousands of men and women working in the offshore energy industry, from supply vessels to rig crews.”

Inclusion of an area in the DPP is not a final indication that it would be included in the approved program or offered in a lease sale, because many decision points still remain, Zinke said.

Before any individual lease sale is held, Interior’s Bureau of Ocean Energy Management (BOEM) would continue to incorporate scientific information and stakeholder feedback in its reviews “to further refine the geographic scope of the lease areas.”

“American energy production can be competitive while remaining safe and environmentally sound,” said Acting BOEM Director Walter Cruickshank. “Public input is a crucial part of this process, and we hope to hear from industry groups, elected officials, other government agencies, concerned citizens and others as we move forward with developing the 2019-2024 National OCS Program.”

In the GOM, the draft proposes 10 biannual lease sales in the Western, Central and Eastern regions that are not under Congressional moratorium or otherwise unavailable, and two sales in the portions of the Eastern and Central GOM after the expiration of the Congressional moratorium in 2022. The draft plan would offer for the first time since 1988 most of the Eastern GOM Planning Area for lease.

In Alaska, the DPP proposes three lease sales in the Chukchi Sea, three in the Beaufort Sea, two in Cook Inlet, and one sale each in 11 other program areas. No sales are proposed in the North Aleutian Basin Planning Area, which has been under presidential withdrawal since December 2014.

The DPP unveiled by Zinke during a press conference, requires three steps to be taken before the current OCS plan is tossed.

The original OCS leasing program for 2017-2022, finalized in November 2016 by the Obama administration, had, among other things, removed Alaska’s Beaufort and Chukchi seas from the program. The Mid- and South Atlantic region also was removed following criticism by coastal communities, legislators and the military. The Obama administration’s plan was finalized following a multiyear process, including the submission of more than 1.4 million public comments.

The announcement Thursday is only the first step. The second step, a public comment period on the proposal, is to be followed by Interior’s Bureau of Ocean Energy Management (BOEM) issuing a revised proposal, which would then have to be finalized.

Following President Trump’s campaign promise to open more of the United States to energy development, Zinke in May signed orders implementing an “America-first” strategy that directed a rewrite of the 2017-2022 OCS leasing plan to give “full consideration” to leasing offshore Alaska, Mid- and South-Atlantic, and the Gulf of Mexico.

Overall, the entire OCS rewrite by Interior could take at least a year. During the course of the process, Interior may remove areas from consideration for drilling, but it may not make additional areas available.

Thumbs Down By Florida Governor

In a sign that the road ahead will be bumpy, business groups and some Republican leaders voiced their disapproval, including Florida Gov. Rick Scott. He vowed to fight efforts to allow drilling near Florida, which is buoyed by tourism.

“I have already asked to immediately meet with Secretary Zinke to discuss the concerns I have with this plan and the crucial need to remove Florida from consideration,” Scott said.

The South Carolina Small Business Chapter of Commerce also was discouraged by the proposed drilling expansion. Founder Frank Knapp accused the Interior Department of favoring oil and gas over tourism.

“What part of the business sector are they listening to? It’s certainly not small or coastal businesses whose livelihoods are dependent on healthy oceans,” Knapp said.

However, CEO Karen Harbert of the U.S. Chamber’s Global Energy Institute, said the draft proposed program would unlock “the vast potential of American energy and expands our ability to export oil and gas to our allies around the world. The plan…is a long-term commitment to securing our energy future, and would help cement America’s role as an energy superpower, creating jobs and contributing to our economy.

“For decades, our nation has needlessly limited our own ability to harness oil and gas resources,” she said. “This new plan sets a much different course, allowing far greater access to offshore areas that haven’t been previously accessible using advanced technology to determine where to safely drill. Even with our remarkable energy renaissance over the past decade, we still import a significant amount of oil. We look forward to helping build support and participating in the process leading to the final adoption of the plan.”

The Consumer Energy Alliance (CEA), a national advocate for energy consumers, cheered the draft plan. President David Holt said the proposal would expand energy development opportunities “as part of a rational, balanced, all-of-the-above energy policy” and “recognizes that American energy is critical to maintaining low energy prices for families across the nation, and for U.S. leadership for innovation and technology toward continued environmental progress.”

Because of “record advancements in safety procedures, regulations and technology, Americans can be confident that such development will be done safely and responsibly,” Holt said. “Growing our economy and safeguarding the environment can — and do — go hand in hand. The only choice is to stop the political posturing so we can work together on real energy and environmental solutions. Today, we took a big step in doing just that.”

Meanwhile, conservation groups were girding for a protracted fight too.

“The Trump administration’s dramatic expansion of offshore oil drilling is beyond reckless,” said the League of Conservation Voters’ Alex Taurel, deputy legislative director. “Seaside communities, businesses and elected officials from both parties have consistently opposed risky offshore drilling because of the grave threat it poses to their way of life, our climate and local economies that rely on tourism and fishing.”

Public meetings are scheduled on the DPP beginning Jan. 16 to comment and help to prepare the EIS. Specific dates, times and venues are to be posted on BOEM’s website. The DPP and the NOI would be available for public comment for 60 days following publication in the Federal Register.