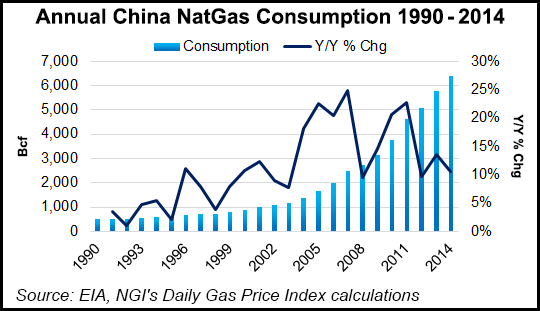 “With the LNG market facing a wall of new supply just as China’s gas demand growth has faltered, it is surprising how few new projects chasing a final investment decision (FID) have been postponed,” he wrote.

Despite an increasingly dour outlook for LNG demand, numerous projects are still marching toward FID. While about 45 upstream oil/natural gas projects have postponed FID this year alone, there has not been a significant reduction in the number of LNG projects slated for FID this year and next, Wood Mackenzie said.

Analysts at Bank of America Merrill Lynch said recently that spreads available to would be U.S. exports indexed to Henry Hub are not sufficient to support new long-term contracts (see Daily GPI, Aug. 26).

Without project postponements, the market could see another 100 million tonnes per annum (mtpa) of LNG capacity sanctioned in the next six to 18 months, Wood Mackenzie said, adding that the likelihood of an oversupply of LNG in Asia would be extended to 2025.

Global supply is about 250 mtpa now, and there is another 140 mtpa under construction, Tomnay said. “Recognizing that the global market will struggle to absorb such a large supply uptick, for some time now we’ve been forecasting a soft global market. However that bearish prognosis is now being exacerbated by a demand downturn,” he said.

“China’s LNG import commitments are set to rise by 17% year-on-year (yoy) between 2015 and 2020, from 20 to 41 mtpa, but China will struggle to take all this LNG so quickly. In contrast, China’s LNG imports fell by almost 4% yoy in the first half of 2015 as a consequence of subdued industrial output and fuel competition, which was driven by relatively low-priced oil.”

The demand outlook is weakening in South Korea, too, and buyers in Asia “are not in a hurry to finalize new LNG contracts,” Tomnay said. The firm believes the door to new LNG into Asia doesn’t open significantly until after 2022, which means that new project FIDs are not necessary until 2017 at the earliest.

Major projects are still moving ahead, though, Tomnay said, from the likes of Royal Dutch Shell [now in the process of acquiring BG Group (see Daily GPI, Sept. 3)], Petronas, Eni, Anadarko Petroleum Corp., BP plc, ExxonMobil Corp. and Woodside. FIDs on these projects are still expected by the end of next year. And there’s a reason why developers could be reluctant to pull back.

“Postponement could invalidate contracts for the portion of project LNG sold so far, and jeopardize hard-won stakeholder support, including from local communities,” Tomnay said. “Some developers may be worried that a loss of momentum could favor their competitors and that a project postponement may be tantamount to a cancellation.”

“Development of even half of this proposed supply could prolong the Asian oversupply to 2025. Wood Mackenzie’s view is that the global LNG market does not need all this LNG at the pace proposed and, as companies confront this reality, a raft of project postponements will follow,” Tomnay said.

Meanwhile, LNG export first mover Cheniere Energy Inc. in June announced an upsizing of its plans that could give it 60 mtpa of aggregate capacity by 2025 (see Daily GPI, June 11).