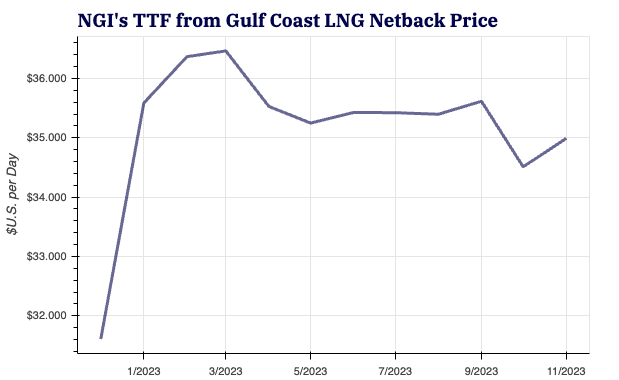 In a call to discuss the Lower 48 producer’s third quarter earnings, CEO Rick Muncrief highlighted a partnership with Delfin Midstream Inc. that would see Devon take up to 2 million metric tons/year (mmty) of long-term liquefaction capacity and a potential equity stake in at least one floating liquefied natural gas (FLNG) vessel off the coast of Louisiana.

The arrangement would provide Devon with up to 150 MMBtu/d “of direct exposure to international gas pricing” in the lucrative European and Asian markets, Muncrief said.

“However, I want to be clear, this is a capital light approach to attain LNG exposure, and our investment in Delfin – which is spread over this year and next – is very minor and will have a negligible impact to our capital outlook.”

Muncrief said a final investment decision for the first FLNG vessel is expected over the coming months, “and we anticipate the facility will be operational within four years of this decision.”

Devon, a leading Lower 48 oil and gas producer, operates primarily in the Permian Delaware, Anadarko, Williston and Powder River basins, along with the Eagle Ford Shale.

He added, “As a result of the immediate value these acquisitions create, we are revising our financial and operational outlook higher for the fourth quarter…This updated outlook increases production targets, raises free cash flow projections and enhances our ability to deliver differentiated cash returns to shareholders.”

Devon’s Permian Delaware assets accounted for nearly 70% of total production during the period.

Devon has upwardly revised its fourth quarter production forecast to a range of 640,000-660,000 boe/d, a 6% increase from 3Q. “This fourth quarter volume growth will be driven by 35,000 boe/d of incremental production from the company’s Eagle Ford acquisition,” management said.

The company also has updated the midpoint of its upstream capital outlook to $835 million for 4Q. “This guidance incorporates $120 million of incremental capital requirements related to recent bolt-on acquisitions in the Eagle Ford and Williston Basin,” management said.

For the remainder of the year, Devon plans to operate 16 rigs and three completion crews across its 400,000 net acres in the Permian Delaware, where the company plans to bring online about 215 new wells for the full year.

In the Anadarko, Devon plans to operate an average of four rigs and one completion crew, and to bring online about 25 wells in the fourth quarter, management said.

In the Williston, management plans to operate two rigs and bring online more than 10 gross wells during 4Q.

In the Eagle Ford, plans are to run four rigs and one completion crew, and to bring online more than 20 wells during the last three months of 2022.

Finally, in the Powder River Basin, Devon expects to run one operated rig and drill about five new wells across the company’s 300,000 net acre position.

Devon fetched average realized prices after hedges of $5.83/Mcf for natural gas, $84.38/bbl for oil and $34.44/bbl for NGLs during the third quarter.

By region, the highest pre-hedge natural gas prices were realized in the Anadarko ($8.89/Mcf) and Powder River ($8.23) basins. The Permian Delaware fetched the highest oil price at $93.60/bbl. 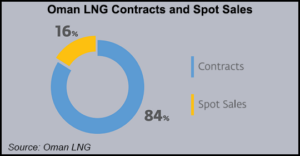