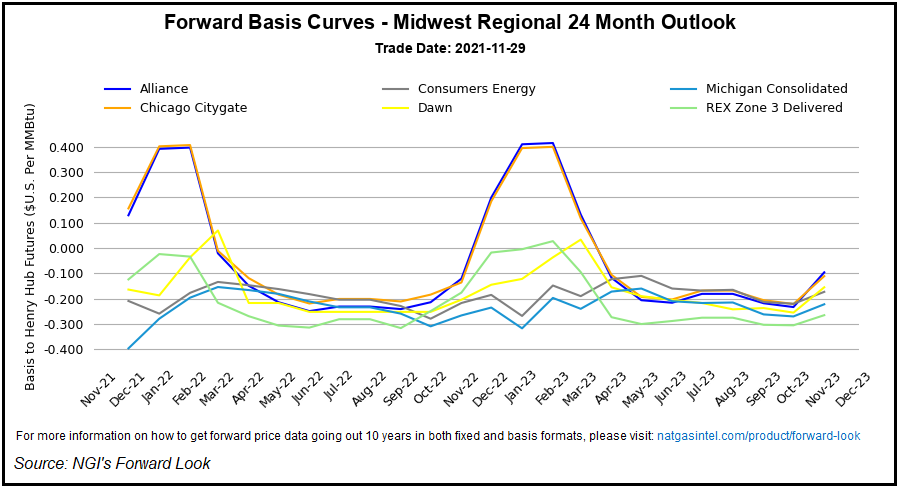 The January contract, in its debut as the prompt month on Monday, plunged 62.3 cents.

NatGasWeather said Tuesday forecasts pointed to increasing warmth expectations for the first half of December, with milder adjustments spread across the 15-day projection period.

“The overnight data remained exceptionally bearish the rest of this work week and again Dec. 9-15 as most of the U.S. experiences temperatures 10-30 degrees warmer than normal,” the firm said. “…What also makes the overnight data bearish is that the end of the 15-day forecast was again quite warm with the upper pattern, suggesting bearish weather headwinds in the 10-15 day period will carry over to forecast days 16-20.”

Widespread cold, the forecaster added, may not arrive in the Lower 48 until the final week of December.

At the same time, production hovered around 97 Bcf/d over the past week, according to Bloomberg estimates, putting output on par with 2021 highs.

For all the near-term headwinds, U.S. exports of liquefied natural gas (LNG) are hanging near record levels and reflect tight global balances. NGI estimates pegged LNG feed gas volumes above 12 Bcf over several recent days, as U.S. export destinations in Asia and Europe continue to clamor for supplies ahead of the winter months.

Demand is expected to remain elevated through the winter, Rubin of EBW said.

Domestically, despite the bearish forecasts, the Lower 48 is nevertheless crawling into winter and utilities are beginning to withdraw gas from storage to power furnaces and meet heating needs.

For the next Energy Information Administration (EIA) storage report, analysts are expecting the second pull of the season – and a much larger one.

The estimates compared with a five-year average draw of 31 Bcf and year-earlier pull of 4 Bcf for the comparable period. EIA is slated to release the latest storage report on Thursday.

The agency posted a withdrawal of 21 Bcf pull for the week ended Nov. 19. That left working gas in storage at 3,623 Bcf, 320 Bcf below the year-earlier level and 58 Bcf below the five-year average.

Spot prices sank on Tuesday as temperatures warmed and prices dropped across the Midwest and East.

NatGasWeather said while cool weather lingered in the Great Lakes and Northeast Tuesday, most of the Lower 48 enjoyed mild high temperatures in the 50s to 70s, generating relatively little heating need.

By Thursday, the firm said, “almost the entire” United States is to be warmer than normal “as upper high pressure rules for very light national demand.”

EBW’s Rubin said space heating demand “is fading quickly, with widespread warm anomalies forecast to blanket the Lower 48.” Looking to the rest of the week, he said, “the first three days of December stand out with a startling 22” heating-degree days “and 12.7 Bcf/d of below-normal demand.”

Into mid-December, NatGasWeather’s outlook called for continued above-normal warmth, with highs of 50s-70s across the western, central and southern United States. While a cold front is forecast to blow into the East next week, it is expected to give way after a few days, as another round of high pressure ushers in above-average highs.