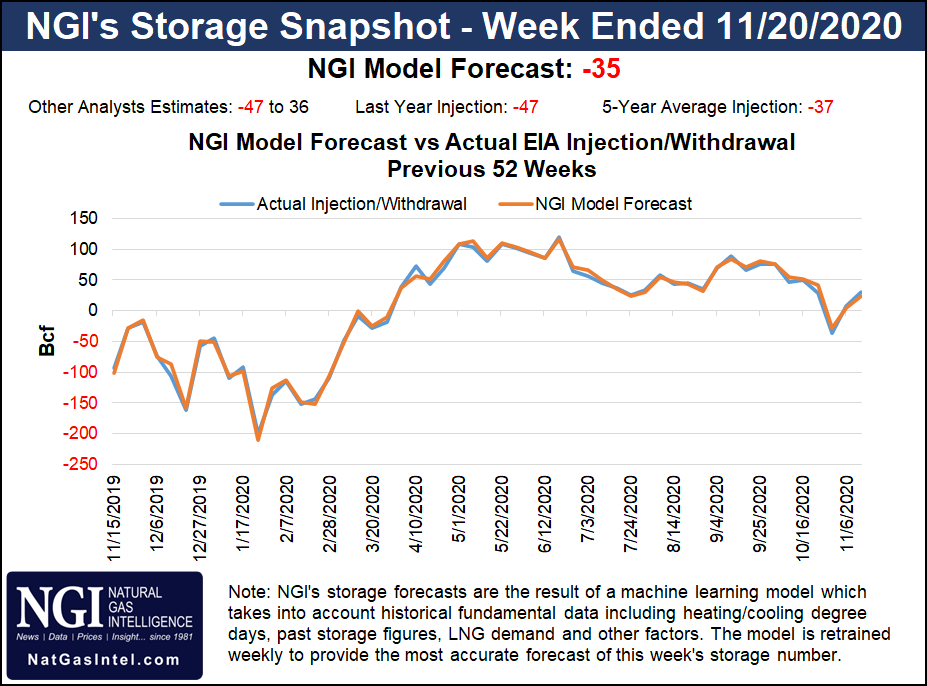 NGI’s Spot Gas National Avg. fell 11.0 cents to $2.320. Colder northern temperatures moved in on Monday and hung around Tuesday, but warmer conditions were expected by Wednesday.

While mid-range forecasts were bearish at the start of the week, with temperatures expected to be above normal across much of the Lower 48 late this week and into next, forecasts Monday were slightly cooler for early December. The weather data overnight maintained those colder trends, showing systems impacting both northern and southern portions of the country, NatGasWeather said.

NatGasWeather estimated Lower 48 production reached 91 Bcf/d to start the week and held near that level Tuesday — up nearly 4 Bcf/d over the past month – offsetting some of the LNG strength and helping to keep the gains of futures somewhat in check.

“The supply/demand balance is still much tighter year/year, but it would simply be more impressive if not for the recent jump in Lower 48 production,” the firm said.

After reporting an unseasonable November injection last week, the Energy Information Administration (EIA) will report this week’s storage report at noon ET on Wednesday, a day earlier than normal because of Thanksgiving. The results could drive markets in either direction, as expectations vary widely.

A survey conducted by the Wall Street Journal found analysts, on average, estimating storage levels declined by 8 Bcf. However, forecasts were also spread across a wide spectrum, varying from a withdrawal of 47 Bcf to an increase of 36 Bcf.

Energy Aspects said total heating degree days (HDD) were nearly 10% below the previous 10-year average for the period, while production was strong. However, moderate cold, including below freezing temperatures in the Northeast late in the report week that boosted spot prices, led the firm to model a 75% week/week increase in HDDs. Analysts said that was likely enough to lift residential/commercial demand by 9.5 Bcf/d and result in a storage pull.

Last year EIA recorded a 47 Bcf withdrawal for the similar week, and the five-year average is a decrease of 37 Bcf.

A reduction in storage would represent a bullish turn from the two prior weeks, while an injection would extend a bearish run that, up to this week, had prevented futures from maintaining any momentum.

Looking ahead, analysts said the coronavirus pandemic and its expected impact on holiday travel could hurt overall energy demand but provide a short-term bump in natural gas use.

“Air travel has risen consistently since the low experienced in April, but still hovers around 35% of 2019,” said BTU Analytics LLC partner Mason Ender. “Considering the nearly ubiquitous message to cancel your Thanksgiving travel plans, it looks like the holiday won’t provide the travel boost it has in past years.

“Planes burn jet fuel, cars burn gasoline. Cutting to the chase, we’re doing a lot less of both and thus actively contributing to oil demand destruction. But the one thing we will burn more of is natural gas,” he said. “If 32 million people typically travel during the Thanksgiving holiday, and the trend we’ve seen in airline passengers continues, roughly 21 million people will stay home. Assuming an average of three people traveling per household, roughly seven million additional ovens could fire up this coming Thursday” and more furnaces will likely run through the end of the week.

The U.S. Centers for Disease Control and public health officials in a majority of states have cautioned against travel this week because the virus is spreading rapidly across the country. The United States tallied 169,190 new cases on Monday, according to Johns Hopkins University data, while and the number of Americans hospitalized — 85,836 — set a record for a 14th straight day.

Despite bouts of winter weather in parts of the northern United States, spot prices overall declined Tuesday, led lower by hubs in the Northeast.

NatGasWeather said national demand started the day strong after cash prices advanced Monday with “chilly morning lows of 10s to 30s” across the northern United States. Spot prices climbed a bit in the Midwest amid the cold, but demand was not strong enough in the eastern U.S. to support continued price gains.

The forecaster said heating needs will ease Wednesday through the end of the week “as much of the United States experiences comfortable late-November highs of 40s to 70s. There will still be weather systems into the western and southern U.S. this weekend, just mild ones as they fail to tap any truly cold northern latitude air.”

In the Northeast, where prices have been volatile in recent weeks, Algonquin Citygate dropped $1.335 day/day to an average $ 1.945, and PNGTS lost 66.0 cents to $3.650. These and several other hubs in the region posted robust gains a day earlier.

Prices were mixed across the rest of the country, with mostly modest gains or losses.