Despite strong production levels and festering weather worries, natural gas futures recovered some ground on Friday, as traders saw a buying opportunity after the prompt month shed 12 cents a day earlier and reached its lowest level of the fall months. 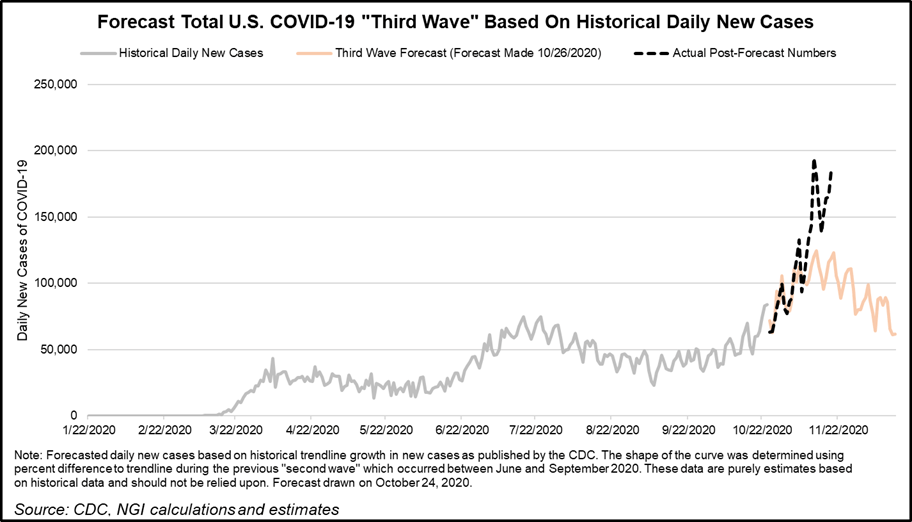 Futures have in November struggled to maintain momentum amid forecasts for unseasonably warm weather, bearish storage injections and a recovery in Lower 48 production that has offset solid demand for liquified natural gas (LNG) exports. New restrictions to combat coronavirus spread that could diminish energy demand from the industrial sector has infused additional uncertainty.

Traders, however, shrugged off those concerns Friday, and the December Nymex contract gained 5.8 cents day/day to settle at $2.650/MMBtu. January gained 5.0 cents to $2.770 after losing 11.8 cents the prior day.

While overnight weather models hinted at a modest cooling trend before mid-December – giving markets something to look forward to – forecasters said it was unclear if the change would amount to much. Most outlooks into next month still call for above-average temperatures and below-normal heating demand across much of the country.

“If and when weather models turn away from the current blowtorch outlook,” further price gains may lie ahead, EBW Analytics Group CEO Any Weissman said Friday. However, he estimated the odds of a substantial shift in weather outlooks at below 50%.

NatGasWeather said that while there are likely to be bouts of colder air across the northern United States yet this month, none are expected to be “widespread enough to result in stronger-than-normal demand. But what makes the coming 15-day pattern emphatically bearish is the start of December is still forecast to be warmer than normal over most of the United States, as Arctic air remains bottled up over northern Canada. Until frigid northern latitude air releases and advances into the northern or eastern U.S., bearish weather headwinds will continue.”

At the same time, the firm said, Lower 48 production jumped over 91 Bcf/d this week, 4 Bcf more than just one month ago. The forecaster said greater output and mild temperatures were evident in Thursday’s Energy Information Administration (EIA) storage report.

The agency reported an injection of 31 Bcf into gas stockpiles for the week ending Nov. 13, notably above market expectations and the year-earlier 66 Bcf withdrawal.

While LNG feed gas volumes on Friday were near 10 Bcf and have been strong all of November, analysts are watching closely to see if the surging coronavirus pandemic cuts into industrial demand as it did last spring when virus outbreaks peppered much of the globe.

Hamilton Smith, an analyst at BTU Analytics, said Friday that industrial demand had leveled off in recent weeks. It usually increases in advance of winter and looming heating needs. The change this year was due in part to the active hurricane season, but he suspects spread of the virus and new restrictions put in place by states and cities to combat it are likely making an impact on energy demand.

Several countries in Europe have imposed new business activity restrictions in recent weeks. Japan is grappling with a spike in cases, though Prime Minister Yoshihide Suga has not yet called for reissuing restrictions on travel or business.

In the United States, where cities and states across the country are instituting new limits to slow rapid spread, health authorities reported more than 187,800 new cases for Thursday, eclipsing by 10,000 the one-day record set a day earlier, according to Johns Hopkins University data.

Though multiple vaccines are poised to hit the market late this year or early next, analysts worry about an economic slump this winter because it may take months to inoculate a majority of the population. Lawmakers in Washington are debating another round of stimulus to bridge the economy to a post-vaccine era, but no legislation is imminent. The Trump administration denied the Federal Reserve’s request for a 90-day extension of emergency lending programs.

“Quite what kind of impact this will have on the economy remains to be seen, but it certainly does add an element of uncertainty,” said Joshua Mahony, market analyst at IG Group.

Spot gas prices advanced overall Friday after declining over the three previous days, though western regions gave up some ground.

That noted, comfortable weather that generated little heating demand most of the week is expected to extend into next month. Catalysts for spot prices could prove elusive, NatGasWeather said.

A “quick cold shot with rain and snow” was expected to “sweep across the Midwest” ahead of the holiday, with highs in the 30s and 40s for a modest bump in national demand, the forecaster said. But from Thanksgiving into early December, the northern United States will see overall warmer-than-normal conditions, with highs ranging from the 30s to 50s, while southern states will enjoy highs of 60s to 80s.