FERC erred when it issued a 2018 certificate to Spire STL Pipeline LLC by failing to adequately examine the market need for the natural gas transmission project, an appeals court ruled Tuesday. 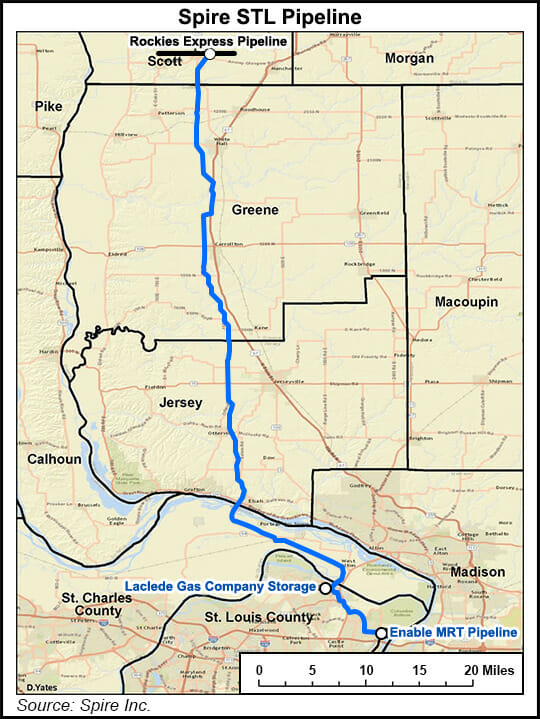 The U.S. Court of Appeals for the District of Columbia (DC) Circuit vacated Spire’s certificate and remanded it back to the Federal Energy Regulatory Commission. The court’s decision represents a win for the Environmental Defense Fund (EDF), which had urged the court to strike down Spire’s FERC certificate.

“On the merits, we agree with EDF that the Commission’s refusal to seriously engage with nonfrivolous arguments challenging the probative weight of the affiliated precedent agreement under the circumstances of this case did not evince reasoned and principled decisionmaking,” the court wrote.

“In addition, we find that the Commission ignored record evidence of self-dealing and failed to seriously and thoroughly conduct the interest-balancing required by its own Certificate Policy Statement.”

The court acknowledged that its decision to vacate Spire’s certificate could cause disruptions for the pipeline, which received approval to enter service in late 2019.

“Remanding without vacatur under these circumstances would give the Commission incentive” to allow projects to begin construction before a comprehensive review has been completed, the DC Circuit wrote. “We certainly do not wish to encourage such an approach given the significant powers that accompany a certificate of public convenience and necessity.”

The circuit court opinion adds legal weight to a commonly raised criticism of FERC’s pipeline review process. It corroborates views previously expressed by the Commission’s Democratic contingent that FERC has come to rely too heavily on precedent agreements in assessing the market need for proposed pipeline capacity.

FERC issued a certificate of public convenience and necessity to Spire in a split decision in 2018. Current FERC Chairman Richard Glick, then serving as commissioner, and former Commissioner Cheryl LaFleur both remained unconvinced that the 65-mile, 400,000 Dth/d conduit was justified in terms of demand.

Spire is designed to tap supplies from the Rockies Express Pipeline for delivery into the St. Louis metropolitan area.

Project detractors had argued that Spire failed to show adequate need for the project, pointing to the affiliated nature of the Spire Missouri precedent agreement, the lack of new demand in the St. Louis market and the ability of existing infrastructure to meet the project’s purposes, among other issues.

“The Spire Project is the unusual case of a pipeline application that squarely fails the threshold economic test,” LaFleur wrote at the time. “The record does not demonstrate a sufficient need for the project.”

Both Glick and LaFleur took issue with FERC relying on Spire’s single precedent agreement with an affiliated entity to determine project need during the proceedings.

Glick continued to raise doubts about the Commission’s decision-making during the rehearing process.

“As I noted in my 2019 dissent regarding the Spire project, the Commission must consider all relevant factors when determining the need for a project and balance the evidence of need against adverse impacts,” Glick said Tuesday, referring to a later dissent in FERC’s order denying rehearing requests challenging the Spire decision.

In that 2019 dissent, Glick wrote that the Spire companies had an “obvious financial motive” to build the new pipeline given that an existing pipeline owned by an unaffiliated third party appeared sufficient to satisfy demand in the region. There was “abundant record evidence” that should have led the Commission to doubt whether the project was actually needed, he wrote.

“Instead, the Commission asserts that the existence of the precedent agreement between Spire STL and Spire Missouri is sufficient, in and of itself, to find that the Spire Pipeline is needed, no matter the contrary evidence,” Glick wrote in 2019.

In 2021, the court’s decision to vacate the Spire certificate offers a lesson for FERC, according to the chairman.

The D.C. Circuit ruling “shows that when FERC cuts corners with its analysis, it puts its decisions — and the investments made in reliance on those decisions — at substantial risk,” Glick said. “I look forward to continuing to discuss these issues with my colleagues in the hope that we can quickly agree on a legally durable approach to assessing need, among other issues.”

With Glick now serving as chairman, his views on the reliability of precedent agreements as a gauge of project need could foretell policy changes to come at FERC, especially given the agency’s recent move to officially revisit its 1999 policy statement on natural gas infrastructure reviews.

Tuesday’s ruling “represents a significant defeat for FERC, but we would underscore that the court found that the Commission failed to follow its existing policies regarding the determination of need, not that its existing policies are flawed or require change,” analysts at ClearView Energy Partners LLC wrote in a note to clients Tuesday.

“…We think that the Commission would be on solid ground to reiterate that a project sponsor needs to provide additional evidence of need for transactions involving affiliates in upcoming policy statement revisions,” the analysts added.