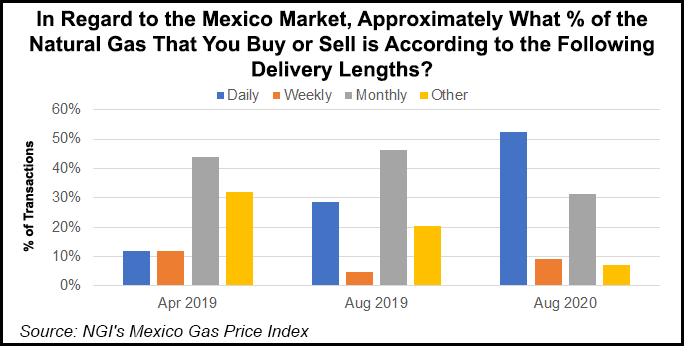 The Mexico gas market is increasingly trading in the daily market, according to the third survey of natural gas buyers and sellers in Mexico conducted by NGI’s Mexico GPI.

“Part of this could be that some players are required to enter the market more on a daily basis for balancing purposes, but it also suggests more parties are becoming comfortable transacting in the new Mexico natural gas marketplace,” said NGI’s Patrick Rau, director of strategy and research. “After all, daily buying is more involved than simply base loading everything to a monthly price.”

The survey, conducted over the first three weeks of August, received 29 responses from buyers and sellers in Mexico, compared with 23 in the second version last August and 29 in the first version undertaken in April 2019.

In this month’s survey, 30% of market players noted they currently transact with independent marketing companies, up from 21% a year ago. That is still slightly below the combined 31% for Pemex and CFE, but those two entities accounted for 44% of the mix in August 2019.

Meanwhile, price terms did not change significantly in comparison to last year’s surveys.

Negotiated fixed priced based transactions accounted for 22% of contract terms, versus 26-27% in the last two surveys. Similarly, deals tied directly to the monthly Comisión Reguladora de Energía (CRE) IPGN index, which the CRE began publishing in July 2017, fell from 11% in August 2019 to 6% this month.

Pemex First Hand Sales (VPM) deals increased to 13% this month from 6% in August 2019. Deals done as a difference to a daily or monthly U.S. index rose seven percentage points, from 23% in August last year to 30% this year.

Based solely on the latest survey results, 40% of Mexico natural gas transactions are either negotiated fixed priced or are negotiated as a basis differential to bidweek. As such, those transactions could be used by Price Reporting Agencies (PRAs), such as NGI, to calculate spot market indexes, Rau said.

“Such deals only comprise about 17% of total U.S. natural gas transactions, so that would appear to be favorable toward the establishment of spot market indexes in Mexico,” he said. “However, the U.S. gas market has far more participants than its counterpart in Mexico, and there are many more companies in the U.S. who are willing to submit deals to PRAs than in Mexico right now.”

The majority of spot market transactions in the U.S. trade on the IntercontinentalExchange (ICE), “which greatly contributes to trading liquidity in the U.S., as well as to the robustness of the data survey,” Rau said.

NGI is only one of two PRAs to receive ICE U.S and Canadian natural gas spot market data.

“Such an exchange would certainly help advance the liquidity of the Mexico market, but in the absence of that, any natural gas indexes in Mexico would rely on direct data submissions from the parties themselves, and most entities in the Mexico market are simply not at that stage just yet,” Rau said.

About 60% of gas deals in Mexico are either directly or indirectly influenced by U.S. prices indexes, either as a difference to a U.S. price index such as the Houston Ship Channel, monthly bidweek basis negotiations of the Henry Hub, or via Pemex’s VPM, which is simply transportation and other charges added to published U.S. spot market prices.

That figure is up from the 46% reported last August, but still lower than the 66% registered during the April 2019 survey.