What are almost certainly to be the last two upstream auctions of the current Mexican administration, which ends Dec. 1, will face a special challenge to potential investors. 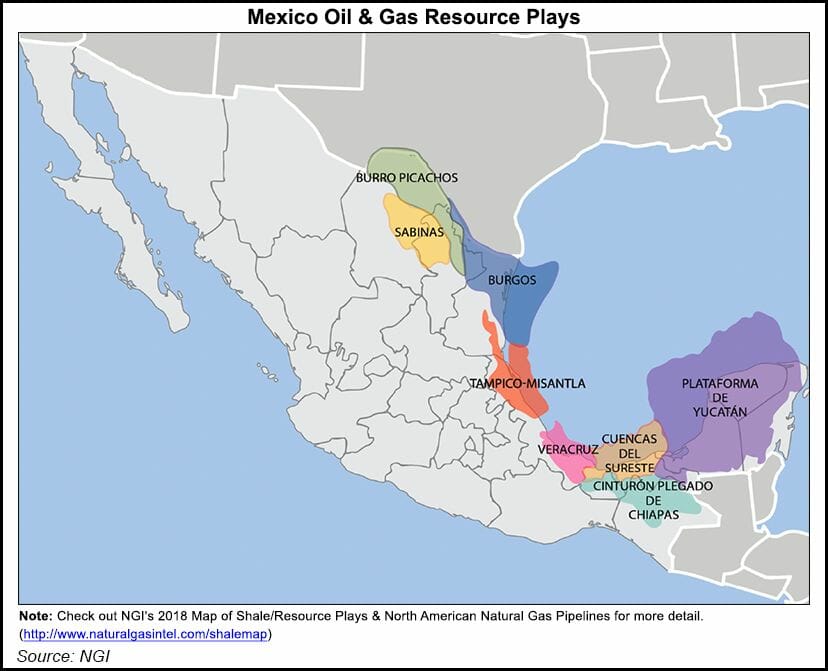 Most of the blocks on offer for Rounds 3.2 and 3.3 of Mexico’s 2013-14 energy reform lie in the state of Tamaulipas, where the U.S. government advises its citizens to stay away under a security warning of a level similar to that of Somalia.

Mexican officials agree that security needs to be much improved in Tamaulipas, but insist that the U.S. government warning greatly exaggerates the problem. New Orleans, they maintain, has a higher murder rate than Reynosa, the largest city in Tamaulipas.

Round 3.2 features conventional blocks — all of them onshore — of which the majority are in Tamaulipas in the Burgos Basin, near the Texas border. Burgos is Mexico’s leading producer of non-associated gas, though production has been halved in recent years.

Others are further south in the Tampico-Misantla Basin, while further south are blocks in the southeastern basins onshore from the highly prolific areas in the Sound of Campeche that generated the Mexican oil boom of the late 1970s.

In the most recent Mexican auction, Round 3.1, bidders offered millions of dollars in bonus offers on the offshore blocks that were snapped up in the southeast. By contrast only four offshore blocks in Tampico-Misantla and four further north in Burgos were taken up.

So far no companies have yet been knocking on the door of the data room with a view to take part in the bidding for 3.2. There is, however, plenty of time. Bids are to be opened July 25. As is customary in Mexican auctions, the results are to be published on the same day.

While the composition of the blocks in 3.2 in some ways appears almost a mirror onshore image of 3.1, auction 3.3 is very different. All the blocks in 3.3 are onshore in Tamaulipas and with resources categorized as unconventional, of which in Mexico only state-owned Petroleos Mexicanos (Pemex) has only a smattering of experience.

Round 3.3, if it takes place, would be the first successfully completed auction of unconventionals as two previous auctions featuring unconventional resources were both canceled, largely because of a lack of regulations to cover the technical and ecological framework for practices such as hydraulic fracturing.

Alejandro Hope, a former senior officer of Mexico’s national security agency, Cisen, and a consultant to the private sector, believes that the problems that Tamaulipas face as a result of the illegal narcotics trade are serious.

In his recent regular column in the daily El Universal, Hope cited two recent serious incidents, one in the Reynosa area, the other in Nuevo Laredo, also in Tamaulipas.

Amid a firefight between narcos and the Mexican Navy in the Reynosa area, a navy soldier was killed and family of four, including two small girls, was shot dead in the crossfire. In Reynosa two different warring factions of narcos had a clash in which five people were killed, including a woman who lost control of her vehicle which smashed into a post.

The prevailing characteristics of Tamaulipas are of warring narco factions and a daily armed presence of the armed forces in what should be policing.

Tamaulipas is no failed state, wrote Hope. But, he added, it remains trapped in a labyrinth of violence that it seems unable to escape.

“Of course, big companies with extensive international operations and similarly sized security budgets are not likely to be fazed by whatever is going on in Tamaulipas,” Hope told NGI’s Mexico Daily. “But many of those in the shale industry have no previous operational experience in the rest of the world.”

Besides which, added Luis Miguel Labardini, a partner of the Mexico City-based consultancy Marcos y Asociados, “not only the security infrastructure is wanting. The current state of the roads in Tamaulipas is not all suitable for shale operations.” What is required, he said, is a “cordon sanitaire.

“The area of the shale prospects is very close to the U.S.,” said Labardini. “It’s a relatively tight geographical area, where the companies can share services and infrastructure under the protection of the military.”

A shale/tight resource enclave would certainly add a degree of spice, but it might also promote relaxation in the current border tensions between the United States and Mexico.