With New York City aiming by 2040 to achieve net-zero electricity emissions, along with using 100% renewables and a ban on fossil fuel use in all new buildings, the Big Apple’s largest utility, Consolidated Edison Inc. (ConEd), has begun to make big adjustments, CEO Timothy Cawley said Tuesday. 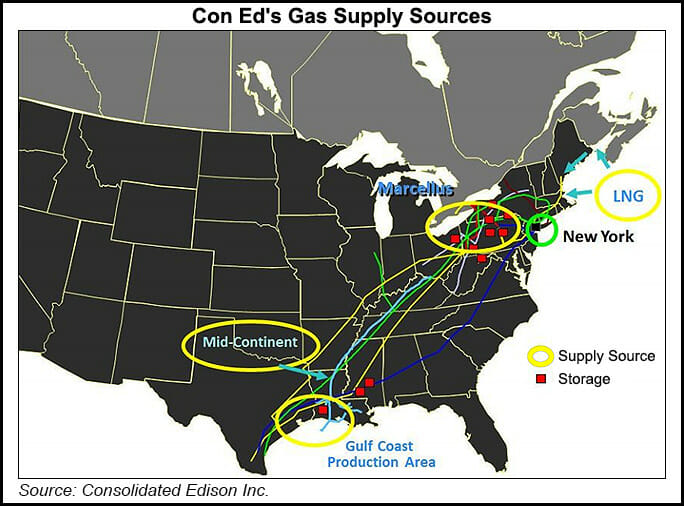 Our Energy Policy, an energy issues nonprofit, hosted Cawley and New York League of Conservation Leaders President Julie Tighe to discuss how the utility plans to help the city achieve its net-zero goals.

“There are incredibly ambitious goals in New York State,” said Cawley. As the second-largest solar producer in North America, he said ConEd is “uniquely positioned to help with the transition to this clean energy future.”

ConEd distributes natural gas through 8,000 miles of pipes to 1.1 customers throughout Manhattan, the Bronx, Queens and Westchester County. Mayor Bill de Blasio in February said New York City must “say goodbye to fossil fuels,” including natural gas, in its “large building systems” by 2040.

In response, ConEd plans to improve energy efficiency in existing and new buildings.

According to Cawley, the utility must “transition that system over the next few decades.” To upend the system to meet the city’s goals, ConEd is working with researchers to determine if hydrogen, or renewable natural gas (RNG), or both could be used in the natural gas pipeline system, said Cawley.

Studying whether it could run RNG through its pipelines, ConEd is working with a partner in Rochester, NY, as well as a developer in Westchester County. However, there are limits with RNG, Cawley pointed out.

RNG “needs feedstock. But it is a component we will leave on our table as we move closer to net-zero over the next several decades.”

Tighe noted that New York City has several “waste streams that need to be managed,” which could provide an RNG source. “We’re going to continue to have food waste; we’re going to have sewage waste. New York City is doing this now where they are collecting their food waste and processing wastewater through digesters, and they have generated more gas there than they can use.”

Cawley agreed, adding that it may be one of many future solutions in achieving net zero.

Green hydrogen, produced from renewables, also is “squarely on the table,” said Cawley. It may be years before green hydrogen is ready for large-scale deployment, but demand is expected to grow within the next few decades.

“In the last year, I have seen more investment in green hydrogen technology and deployment and piloting than ever before,” said Cawley. “It’s not here yet, but it could be really important to get to that last stretch to net zero. It is likely to become more and more important.”

The utility also is working with researchers to advance green hydrogen technologies. Green hydrogen could end up in ConEd’s natural gas system, used for long-haul transport, or for generation, according to Cawley.

“Really it’s about getting that technology to scale and efficient and then finding the best application for it,” he said.

ConEd also plans to invest $1.5 billion into energy efficiency programs by 2025, followed by $4.5 billion by 2030. “That’s really the best, first answer,” the CEO said. “It saves customers money and it reduces emissions.”

Detailed energy consumption data and careful planning are at the center of ConEd’s plans to lower emissions. According to Cawley, the largest capital project, the Smart Meter program, allows the utility to manage voltage across the grid so that every customer has adequate supply, “while cutting overall consumption by 1.5%.”

The utility also has “incentives for geothermal and air source heat pumps.” While most customers have so far continued to opt for the less expensive natural gas, ConEd expects to be “pushing that really hard” for the incentives moving forward.

As natural gas consumption declines and efforts are made to decarbonize, additional generation sources are to be added to power the Big Apple.

Currently, about a quarter of ConEd’s energy mix is renewables, namely hydropower, Cawley noted. However, to achieve 80% renewable energy by 2030, an interim goal for the state, ConEd’s renewable generation mix will have to increase two-fold.

The state also has issued a proposed notice for the wind developments planned along the shallow waters of the New York Bight, offshore between New Jersey and Long Island.

The Department of Interior has listed the New York Bight, which includes eight lease areas totaling 627,331 acres that may be auctioned for commercial wind energy development. According to the DOI, the area could support more than 7 gigawatts (GW) of offshore wind energy, enough to power 2.6 million homes.

Cawley predicted that the state utilities and other developers could be looking to invest “about $12 billion on projects to allow the power to flow either from offshore or from generation centers to the north of the city, into the city.”