Achieving the decarbonization goals outlined by the Biden administration requires a thoughtful, deliberate transition that takes into consideration reliability, affordability and portability. But, unintended consequences that an outright ban on certain resources may bring also need to be examined, oil and natural gas executives said last week. 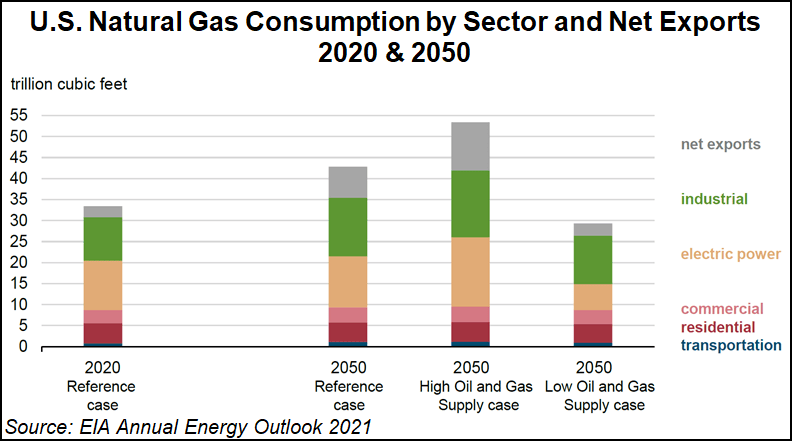 Executives from the Alliance to Save Energy (ASE), American Gas Association (AGA), National Grid plc and BP Energy Co. shared a virtual stage last week to participate in a conversation hosted by OurEnergyPolicy exploring the role of natural gas in the future energy mix. OurEnergyPolicy is an organization aimed at facilitating “substantive, responsible” dialogue on energy policy issues.

At the core of the hour-long conversation was the pathway the United States may take to achieve the Biden administration’s goal to cut U.S. greenhouse gas emissions by half by 2030. A longer-term goal of net zero emissions by 2050 also has been announced.

ASE President Paula Glover said there are myriad tools available to make the transition to net zero, including electrification and carbon capture, utilization and storage. Gas will be needed too.

“Ultimately, the goal is to decarbonize,” she said. “Start with the end in mind. If the end is deep decarbonization and a reduction of greenhouse gas emissions, then we shouldn’t be deciding what is going to get us there. We should be figuring out what tools we need where.”

Solutions will vary among regions, according to Glover. Where electrification may be the right solution for one region, 100% renewable energy with storage and/or natural gas may be the right fit for another. Proper investments in infrastructure and research and development are needed to determine what actually works.

“I don’t think of gas as a hindrance,” Glover said. “Gas has a role to play in whatever this decarbonized future is. If we keep our eye on the ball, I think we’ll get to a better solution.”

AGA Vice President of Energy Richard Meyer said the use of advanced gas technologies — like the gas heat pumps being studied by Duke Energy for use in converting coal plants into energy storage systems — have not garnered enough attention, with more work to do to prove the technology and deploy it. Hydrogen, carbon capture and sequestration and methane emission reductions also need to be examined.

National Grid’s Ross Turrini, chief gas engineer, said getting methane emissions under control is one of the biggest steps the industry can take toward reaching climate goals. On this front, leak detection and repairs provide an “incredible opportunity.” National Grid is replacing 400 miles per year of aging infrastructure throughout New York, Rhode Island and Massachusetts.

BP Energy CEO Orlando Alvarez said renewable natural gas (RNG) opportunities also are expanding in the United States. Parent company BP plc, with its own goal to become a net zero company by 2050, is partnering in two ventures to develop RNG from captured methane from waste at dairy farms. These projects and others like them are garnering “a lot of attention, specifically for the transport sector right now,” according to the CEO.

Turrini said the biggest challenge for RNG is interconnection. If dairy farms or hog farms are located far away from a gas system, the high cost of interconnection can make a project unprofitable.

“We need to get the right regulatory framework that incents and sort of socializes the interconnection costs that will incent that RNG development.”

Turrini noted that this isn’t the first transition gas has undergone.

In the 1800s, manufactured gas was a step toward modernization by providing a source for heating, cooking, lighting and hot water. Eventually, the use of manufactured gas was phased out as high-pressure pipes and pumping systems led to the construction of interstate pipelines for natural gas.

The engineer likened natural gas to Rocky Balboa, one of the multiple installments in the Rocky franchise. Natural gas, he said, “has been sort of a punching bag” and is the “true underdog story in the energy mix.”

But he noted the road to net zero is a 30-year transition, with a lot of research and development still left to do to ensure the infrastructure is built and ready for the low-carbon future.

“We are resilient. We’ve made an energy transition before,” Turrini said. “This is not something we can’t do if we are thoughtful and we engineer it.”

Gas pipeline safety also is critical, he said. If the industry wants to secure the place of gas in the future, a focus on safety is necessary in the short term.

“Focusing on the safety, the reliability, affordability — and making sure all those things are right — gives us a seat at the table to be part of the discussion on the energy future, so that we can secure the right spot for natural gas in that mix.”

Meyer said the utilization of energy storage may be the quickest, most cost-effective option for delivering reliable, low-carbon energy. End-use reductions in consumption also are on the table.

What has been missing from a lot of the conversations on decarbonization, the executives said, has been affordability.

Glover said Covid-19 resulted in energy becoming “more of a right rather than a quality of life issue” as more people worked from home and children attended school online. With a growing voice that energy is a right, there should not be an ability to disconnect consumers.

“But there is a cost that comes with that,” she said.

The industry has not yet found the balance between consumer affordability and decarbonization and other climate goals. If the push toward decarbonization includes a ban on natural gas and doesn’t consider the other impacts it could have, “we’re going to find ourselves in a very difficult position and making the kinds of choices we as a society don’t really want to make,” Glover said.

She pointed out that while some California cities are banning the use of natural gas, there is growing opposition to such mandates from restaurants, small business owners and others. In Texas, months after residents used their gas stoves to keep warm during a multi-day blackout amid brutal, record-breaking cold, Gov. Greg Abbott signed a bill prohibiting cities from banning its use as a fuel source for new construction and utility services.

“I think for some people, the complexities of this problem feels like we’re trying to resist a transition, when in fact all we’re trying to do is identify all the things that you need to consider in the decision making before you make the decision,” Glover said.