Permian Basin heavyweight Concho Resources Inc., now in a quiet period as the mega-merger with ConocoPhillips is readied, said its oil and gas production, along with profits, declined in the third quarter. 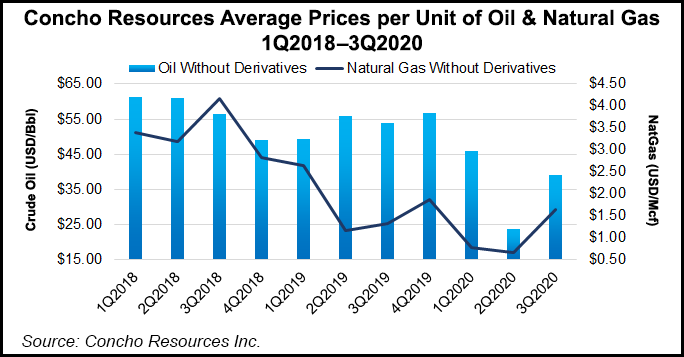 Earlier this month, Houston-based ConocoPhillips clinched an all-stock takeover of Concho worth $9.7 billion. The Midland, TX-based independent is the fifth-largest producer in the Permian.

Concho’s third-quarter results issued on Tuesday were abbreviated because of the merger, which is set to be completed by early next year.

However, controllable costs, which include production and general/administration expenses, also were down, off by 27% year/year to average $7.06/boe.

Concho ended September with long-term debt of $3.9 billion. It also reported $400 million in cash and cash equivalents. In other news, the board declared a quarterly dividend of 20 cents/share on outstanding common stock payable Dec. 18.

Weather models continue to warm Storage seen ending March well below 2 Tcf Cash prices rebound as brief cold front set to hit Lower 48 Price action in the Nymex natural gas futures market on Friday was about as thrilling as watching paint dry. After sideways action throughout much of the day, the April Nymex…