ConocoPhillips on Monday announced it is taking over Concho Resources Inc. for $9.7 billion in stock, forming a giant in the Permian Basin that would rival the output of the biggest players in the nation’s most productive oilfield. 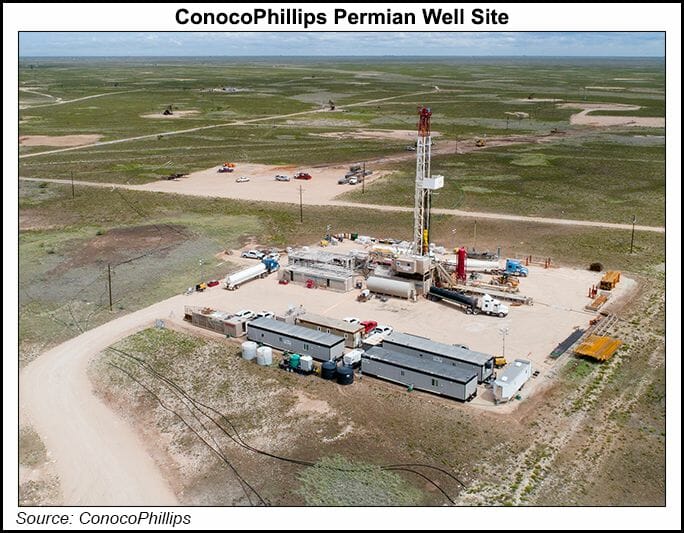 Concho, a Permian pure-play, is the fifth-largest producer by volume in the massive field. The combination marks the largest Lower 48 industry acquisition announced since the pandemic arrived in the United States in March. The deal would elevate ConocoPhillips into a small pool of dominant players in the Permian, joining leaders such as Occidental Petroleum Corp. and Chevron Corp. ConocoPhillips pro forma production with Concho is estimated at more than 1.5 million boe/d.

The deal with Concho, expected to close in early 2021, would give ConocoPhillips a huge production boost in the Permian, which stretches from West Texas to southeastern New Mexico. Midland, TX-based Concho produced 319,000 bbl in the second quarter, more than six times the volumes that ConocoPhillips pumped in the Permian.

“Opportunities to consolidate quality on the scale of these two companies do not come along often, so we are seizing this moment to create a company to lead the necessary transformation of our vital sector for the benefit for all stakeholders in the future,” ConocoPhillips CEO Ryan Lance said.

During a call with analysts, Lance said industry consolidation “is both necessary and inevitable” to address “the lack of scale, poor returns and, increasingly, the challenges and opportunities of environmental, social and governance matters.”

ConocoPhillips vowed to reduce the greenhouse gas emissions from its operations by 35-45% by 2030 and eliminate them by 2050.

Upon closing, Concho CEO Tim Leach plans to join the ConocoPhillips board and leadership team as president of Lower 48 operations.

“From our position of strength and in light of market trends, our board of directors and management team evaluated a wide range of options and unanimously determined that combining with ConocoPhillips is the best path forward for Concho and our shareholders,” Leach said. The deal would create “a better capitalized company” with “more flexibility” to adapt to the evolving shale industry.

Houston-based ConocoPhillips weathered the coronavirus-induced oil market collapse earlier in 2020 better than many, slowing investments and generating consistent cash flow. It emerged from the depths of the downturn this summer with $7.2 billion in cash. While touting a posture of disciplined spending to investors, Lance also signaled that the independent would seek to capitalize on the oil slump with a Lower 48 acquisition that would drive growth at a time when organic expansion is difficult to generate.

The company’s 2Q2020 production was down 24% in response to the pandemic’s demand destruction. Executives also warned they expect to report another double-digit drop for the third quarter.

The acquisition of Concho would substantially increase ConocoPhillips’ net acreage in the Permian to 700,000 net acres from about 170,000.

The deal also presents substantial cost-savings potential. ConocoPhillips expects to take out $100 million in annual direct costs from senior staff and corporate expenses, $250 million in global exploration costs and another $150 million at the business unit level. In total, the company projects $500 million in net cash flow improvement. Management expects to fully realize the cost savings by 2022.

Many Lower 48 producers entered the latest downturn carrying heavy debt loads that quickly became difficult to service when oil prices tanked last spring. Production plummeted as a result. Following months of cost-cutting, production in the U.S. oil patch has dropped from nearly 13 million b/d before the pandemic to about 11 million b/d.

This hastened consolidation talks in the sector, analysts said, and Concho was high on most industry observers’ lists of potential take-out targets given its heft in the Permian.

“The combination is remarkable,” said Wood Mackenzie’s Robert Clarke, vice president of Lower 48 upstream. ConocoPhillips “is adding enough Permian production to nip at the heels of ExxonMobil’s massive program. We like the distinctives each firm brings too. Concho has a history of acquisitions in the region and brings a considerable amount of incumbent Permian knowledge.”

ConocoPhillips “has proven itself as a leader in shale technology…The combination bodes well for the Permian’s longer-term outlook.”

“The combined equity will continue to provide a solid investment opportunity to own crude leverage when the environment improves,” Tudor, Pickering, Holt & Co. analysts said.

Under the terms of the merger, Concho investors would trade each existing share for 1.46 ConocoPhillips share, a 15% premium over the closing price on Oct. 13, when news of a pending deal was first reported. ConocoPhillips has suspended share repurchases until the transaction closes.

The transaction is subject to the approval of shareholders and regulators.

Halliburton Co. CEO Jeff Miller, during a 3Q2020 earnings conference call on Monday, was asked about the spate of consolidation. “I think it’s what you see when market efficiency starts to come into play,” he said. “There’s just a lot of costs associated with operating all these different companies. And so, I suspect at some level there’s the opportunity to better leverage and make more cash flow by bigger operators.”

The companies being acquired are not capturing their previous values as the stock prices are depressed, “but nevertheless the…long-term outlook and the importance of that production is still very relevant,” he said. “And so, in the discussions, I think that’s more of what I hear, is around how to be more efficient. Obviously, this is one way to be more efficient.”

ConocoPhillips said after its deal with Concho closes, it would hold about 23 billion boe resources with an average cost of supply below $30/bbl West Texas Intermediate crude. The combined company is forecast to have an enterprise value of $60 billion.

Of the 1.5 million boe/d of proforma production, 50% would come from the Lower 48 and another 15% from Alaska. About 17% would come from ConocoPhillips’ Asia Pacific business and 14% from its operations across Europe, Middle East and North Africa. Canada would account for the rest.ConocoPhillips is also a major natural gas marketer. It ranked No. 5 in NGI’s 2Q2020 ranking of top marketers in North America.