Haynesville Shale producer Comstock Resources Inc. reported solid results from its mainstay play during the first quarter, and it now is gearing up to expand its expertise in the Bakken Shale with the backing of Dallas Cowboys owner Jerry Jones. 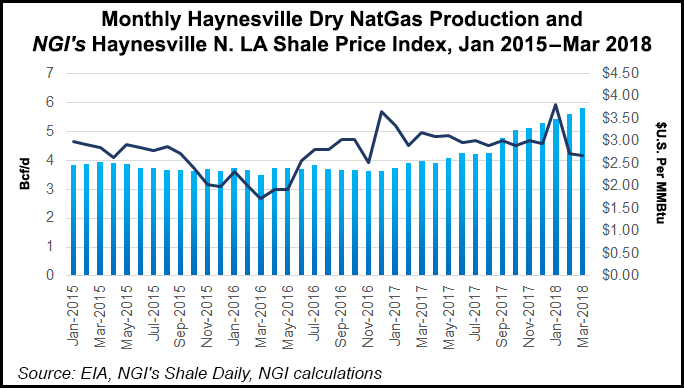 After signing a letter of intent last month, Comstock CEO Jay Allison said Thursday the company has an agreement in hand with Jones, who is contributing $620 million in Bakken properties in exchange for an 84% stake in the company.

The Bakken properties should almost double Comstock’s gross earnings and cash flow, allowing the company to refinance its balance sheet, Allison said. Jones is to receive about 88.6 million newly issued shares of common stack based upon an agreed upon share price of $7/share.

“The contribution provides us with substantial cash flow to invest in our high return Haynesville Shale drilling program and the capital to further grow our drilling prospect inventory through acquisitions of new leases and the producing properties,” Allison said.

The acquisition from Jones’ Arkoma Drilling LLP and Williston Drilling LLP (aka Arkoma) includes 332 producing oil wells, 52.5 net in North Dakota, producing from the Bakken. There are also 128 drilled uncompleted wells or 13 net that are expected to be completed later this year.

“The wells are currently producing approximately 10,500 b/d of oil and 20 MMcf/d of natural gas net to the interest being acquired,” the CEO said. “Our independent reservoir engineers have estimated the proved reserves at 22.5 million bbl of oil and 48.5 Bcf of natural gas. Based on current oil and gas prices, we expect the acquired properties to generate approximately $200 million of operating cash flow in 2018.”

“Arkoma and Comstock entered into a two-year joint venture agreement in which Arkoma may participate in drilling wells proposed by us in the Haynesville and Bossier and Eagle Ford shale area,” Allison said. Comstock would receive a 20% carried interest for projects in which it participates.

The company also expects to increase capital efficiencies through the partnership by 20%.

Comstock plans to offer a “minimum of $75 million in opportunities in the first 12 months and $100 million in the second 12 months,” Allison said.

Arkoma has committed to participating in six Haynesville wells representing $34 million in investments projected under the venture, which should allow Comstock to grow production faster and “pursue acquisitions that we could not otherwise make.”

Comstock during the first three months of the year produced 22 Bcf of gas and 190,000 bbl of oil, or 22.8 Bcfe. Gas production averaged 241 MMcf/d, an increase of 55% from a year ago, while oil output averaged 2,110 b/d, down 28%. The decline in oil production was attributed to a pullback in Eagle Ford Shale drilling in South Texas, which was sold by Comstock last month.

Stronger gas production and higher oil prices resulted in the company’s oil and gas sales increasing by 36% to $74 million, including realized hedging gains.

During the first three months of 2018, Comstock spent $46.5 million on development and exploration activities and it drilled seven horizontal natural gas wells (two net), with eight wells (1.6 net) drilling at the end of March.

The Frisco, TX-based independent also completed nine (3.5 net) operated wells in the first quarter that had been drilled last year.

The company also drilled two successful Bossier wells in Sabine Parish, LA, with IP rates of 17 MMcf/d and 20 MMcf/d. An additional Bossier well has been completed and is currently flowing to sales.

To protect the returns that the Haynesville drilling program can generate, Comstock has hedged 59 MMcf/d of its production from April through December at a New York Mercantile Exchange equivalent of $3.00/Mcf.