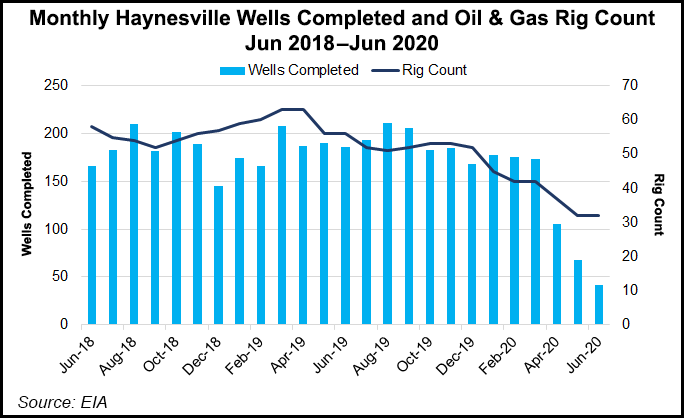 Haynesville Shale giant Comstock Resources Inc. is changing its tune. After adopting a moratorium on bringing new wells online in the natural gas-rich play from April through June, some completion activity has now resumed in anticipation of a bump in prices this winter.

CEO Jay Allison, during a conference call to discuss 2Q2020 results, said gas prices have remained “relatively low,” but the outlook “has improved substantially for late 2020 and 2021.”

During 2Q2020, 18.9 net wells in the Haynesville and Bossier plays were drilled but uncompleted, aka DUCs. Comstock now expects to turn online 25 DUCs through the end of the year.

The Frisco, TX-based independent, majority controlled by Dallas Cowboys owner Jerry Jones and family, has intentionally reduced the number of Haynesville wells to be drilled and adjusted the completion schedule. The volumes, weighted 97-99% to gas, still are expected to climb by 3-5% in 2020.

“Every train has a conductor and ours is Jerry Jones,” Allison said. “He believed in natural gas in America. He believed that the Haynesville/Bossier shale…was a Tier-1 natural gas play,” which has “ close proximity to the Gulf of Mexico, geological predictability, availability of midstream pipelines and proven historic well results.”

Even though the long-term potential of the East Texas-North Louisiana formation is solid, he said, “the second quarter 2020 was the stress-test quarter for the energy sector…that all of us don’t ever look forward to seeing again…The second quarter 2020 may go down as one of the most difficult 90 days in the history of oil and gas.”

The management team is “eager to see what unfolds in the next 18 months, because we see natural gas fundamental strengthening during that window of time,” Allison said.

On management’s anticipation for higher gas prices, Comstock this month raised its rig count in the Haynesville/Bossier to five and plans to add a sixth rig across its 305,000 net acres by the end of the year, CFO Roland Burns told analysts.

Two fracture crews went back to work at the end of June, “and we planned out a third crew within the next couple of months as we prepared the drill down our number of DUCs and take advantage of the anticipated higher gas prices heading into the fall,” he said.

Increased production to the end of the year is forecast to hit original guidance of 1.275 Bcfe. Overall output in the second quarter from the Haynesville operations and from the Bakken Shale averaged 118.6 billion Bcfe, including 116.5 Bcf gas and average oil volumes of 359,142 bbl.

Production from the combined Haynesville/Bossier wells was 9% higher in the period than the 1.1 Bcf/d that Comstock and Covey Park separately produced in 2Q2019.

Four percent of the gas production was shut-in during the second quarter, versus 5% in the first quarter, said Burns.

“Given our completion activity was low in the quarter, we expected the shut-in percentage to be closer to 3%,” he said, but given the “significant” reduction in well completions, the curtailed amount was slightly higher.

In the oily Bakken Shale, volumes fell year/year to 3,947 b/d from 7,628 b/d. Twenty-three percent of the Bakken output was shut-in during the recent quarter because of low prices.