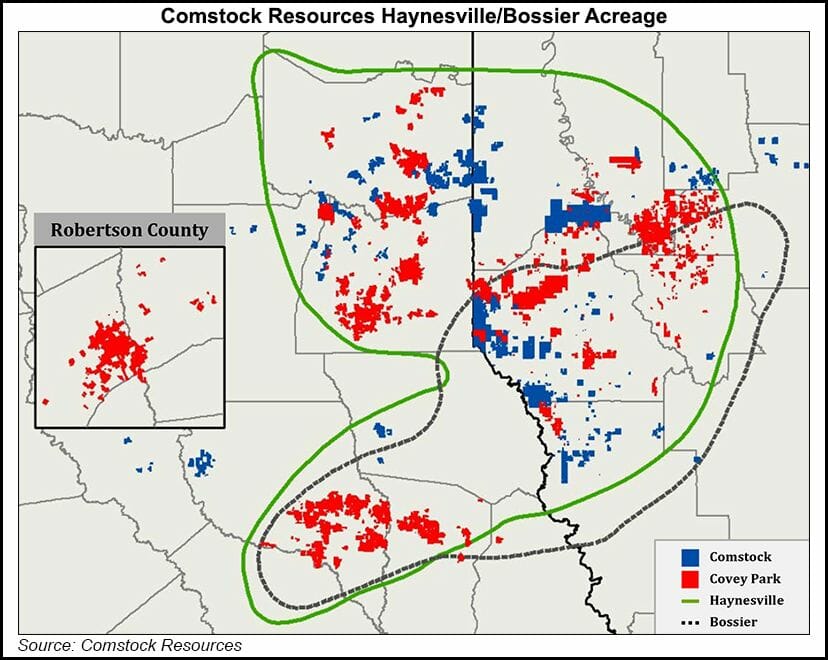 The cash-and-stock transaction, valued at about $2.2 billion, includes Covey Park’s outstanding debt and the retirement of its existing preferred units, which in aggregate total $1.1 billion.

Once completed, Comstock could produce 1.1 Bcfe/d net and have around 374,000 net acres. It also would have an estimated 5.4 Tcfe of proved reserves. Included in the portfolio would be 293,000 net Haynesville acres with 2,000 net drilling locations, including 1,300 net locations with lateral lengths of more than 5,000 feet.

The deal came together with a $475 million cash infusion from Jones, who made his wealth in part by exploring for gas in the Lower 48. Jones would remain the combined company’slargest shareholderwith 75% ownership stakes and a cumulative investment of $1.1 billion. Private equity giant Denham Capital would become the second largest shareholder with about 16% common stock ownership interest.

“I am excited to provide the funding and to team up with Denham Capital to combine the two companies to create the basin leader in the Haynesville Shale,” Jones said. “This combination is another step toward completing my vision to create an industry leading natural gas company.”

Jones, who has owned the Cowboys since 1989, made his fortune in the 1970s and ”80s as a wildcatter initially with Jones Oil and Land Lease. His companies today include Arkoma Drilling LP and Williston Drilling LP, which invest in Lower 48 oil and gas.

“I might be asked why, over the last relatively 18 months to two-year period of time why have I put $1.1 billion in this sector, in this industry,” Jones said during a joint conference call Monday morning. “First of all, I believe these assets to be the best, the very best hydrocarbon assets frankly — I’m going to reach here and say — the world” because of where the gas is located.

“I had such an opportunity to aggregate the assets of these two companies that I just couldn’t pass it up,” Jones said.

Comstock CEO M. Jay Allison said the deal came together over 18 months, as each company eyed the other for consolidation opportunities. The combination checks “many of the boxes” for Comstock by combining complementary businesses to create a public company with “significant size and acreage,” opening up the Haynesville.

The “perfect merger partner” is going to help Comstock to create a “blue ribbon company,” he said.

“The combined company will have a stronger balance sheet, enhanced by a large inventory of high quality, low cost and high return drilling opportunities. In integrating Covey Park we plan to focus on operating efficiency and having a combined drilling program that provides for substantial free cash flow to achieve our goal of reducing our leverage.”

The combination is expected to provide more than $25 million in annual corporate general/administrative savings. The merger would provide 500 miles of gas gathering infrastructure and “limited basis risk” because of the Haynesville’s proximity to Gulf Coast demand and contracts tied to Henry Hub. There are “no unmet minimum volume commitments,” according to Comstock.

The transaction, set to close by the end of July, has been unanimously approved by each companies’ board. Once completed, the board would include Covey Park’s co-CEO John Jacobi and Denham managing partner Jordan Marye. The management team would be led by Allison “but will include representation from both management teams and will combine the two companies’ operating staffs to retain talent and achieve an efficient organization.”

For his investment, Jones would receive 50 million of newly issued common shares of Comstock at an agreed upon price of $6.00/share and $175 million of newly issued shares of perpetual convertible preferred stock. At closing Comstock would assume Covey Park’s existing $625 million 7.5% senior notes, retire amounts outstanding under its credit facility and redeem all outstanding previously issued preferred units.

Tudor, Pickering, Holt & Co., which tongue-in-cheek on Monday headlined, “How ”bout them Cowboys,” said the new entity would be the largest Haynesville operator. The plans by the combined company indicate “71 net wells in 2019 and 66 in 2020 for midpoint production of 1.2 Bcfe/d and 1.4 Bcfe/d, respectively…The most direct read through in our coverage would be Chesapeake Energy Corp., with first quarter Haynesville production of 760 MMcfe/d. We continue to see the need for additional industry consolidation of the basin to gain meaningful scale.”

Wood Mackenzie’s Greig Aitken, who directs corporate analysis, said the merger would create “a Haynesville leader with the pro-forma company having access to the three best parts of the play: Caspiana core in Louisiana, the Shelby Trough in East Texas and the emerging Carthage sweet spot.

“Before the deal, Comstock’s best acreage was confined to Louisiana, but inventory was limited. Adding acreage, specifically around Carthage, should have been a big driver for Comstock. By our models, the Shelby acreage is a jewel too, with low breakevens.”

Covey Park, said Aitken, “was a massive success story driven by a team that was hugely experienced in the Haynesville. The acquisition pushes Comstock further down the gas cost curve.” 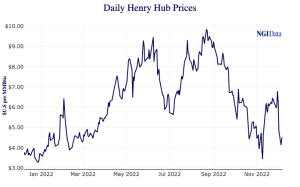 For all the concern about climate change – a worry he shares – JPMorgan Chase & Co.’s chief executive said the world’s current and foreseeable energy needs cannot be met without natural gas and oil. JPMorgan’s Jamie Dimon said Russia’s war in Ukraine amplified the significant role of both energy sources. He noted the surge…