No “easy beach days” are ahead in the U.S. onshore proppant sand market, as fierce competition among suppliers, and a slowdown in Permian Basin completions, likely will continue into 2019, according to analysts. 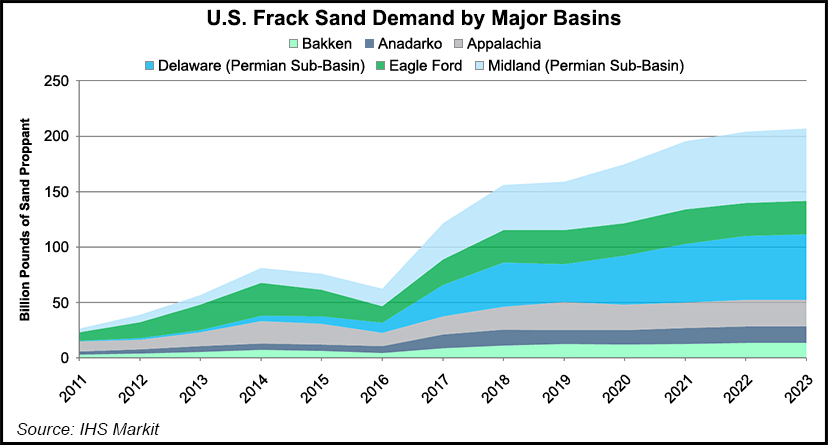 For fracture (frack) sand suppliers, “fears of the past six-to-12 months appear to be starting,” as volatility remains extreme, said Evercore ISI’s analyst team led by Samantha Hoh. The call for northern white 100-mesh sand in the Permian “has faded quickly and the frack sand market is now oversupplied, with increased competition likely to compress pricing into early 2019.”

In short, “there are no easy beach days ahead…”

Those dips “ratcheted up the frack sand pricing pain…” For 2019, TPH’s frack sand estimates currently are more than 20% below Wall Street consensus, “given the magnitude of the pricing decreases we’re seeing.

“Increased adoption of regional sand and its emerging overabundance are exacerbating the issue…as will Permian infrastructure bottlenecks and exploration and production (E&P) budget exhaustion.”

While a slowdown in completion activity and hence sand demand could be temporary in the Permian, the No. 1 completions market, other big onshore basins may offset any short-term weakness, according to Evercore’s team.

Although the June drilled but uncompleted (DUC) well count was revised lower, EIA said the inventory increased by 165, or 2%, to a record 8,033 wells during July, driven by the Permian’s 5% increase and a 2% climb in the Eagle Ford Shale. Anadarko Basin and Bakken Shale DUCs also increased modestly.

“However, the Anadarko Basin’s DUC count has now increased for seven consecutive months and is up 70% from the November 2016 trough, while the Bakken’s DUC count is flat year-to-date despite a doubling of completion activity,” Hoh said. “In contrast, the Niobrara’s DUC count is down 37% year-to-date, with completions outpacing new wells drilled for the sixth straight month.”

Keeping an eye on the Permian is paramount, as it “accounts for 43% of all DUCs currently and has an eight-month runway of work based on the July completion rate of 434 wells per month.”

Each month Evercore issues a U.S. drilling report, and the most recent highlighted gains in Colorado, which were helping to offset some weakness in the Permian and Haynesville Shale. The trend “appears to be extended for another month, with the industry receiving a total of 910 permits for the week,” Hoh said. “The three-week total for August of 2,654 is now tracking almost 7% higher year/year (y/y), with Colorado up 115% y/y and the Anadarko, Bakken, Appalachia and Niobrara up around 30% y/y while the Eagle Ford is up 20%.”

On a net basis, the August permit count is up an estimated 15% from a year ago for the seven basins included in the EIA’s DUC count. The seven basins “account for 85% of all permits in the U.S., down from as much as 90% in June but relatively in line with the 79% average since 2016,” Hoh’s team said.

“However, pressure pumpers in the Appalachia are expecting a slowdown in the back half of 2018 due to operators reaching production targets sooner than expected given increased operational efficiencies,” Webb said.

Recent data showed a 9% decline in Marcellus Shale fleet utilization. “In June, utilization totaled approximately 93% in the basin,” but it had fallen to 85% in July, Webb noted. “Furthermore, the Marcellus completion market wasn’t aided by a ramp-up in fleet sizes between 1Q2018 and 2Q2018, as pressure pumpers were making sure they could match operator demand.”

Still, the long-term outlook for frack sand appears to be strong because of sustained E&P activity growth, rising capital expenditures and escalating proppant intensity, according to IHS Markit.

In its review of the 2Q2018 proppant market, IHS Markit estimated Wednesday the current market value for frack sand this year exceeds $4 billion and should reach nearly $6 billion by 2023. By comparison, the market value for proppant sand in 2016 was $1.3 billion.

“Total North American proppant demand, which includes sand as well as resin-coated sand (RCS) and ceramic, is expected to exceed 168 billion pounds in 2018, representing a 27% year/year growth” in 2Q2018 versus 2Q2017, according to the IHS Market ProppantIQ analysis.

“However, most of this demand is for sand, which accounts for 162 billion pounds (about 96%) of total North American proppant demand in 2018.” Sand demand growth climbed nearly 29% year/year in 2Q2018.

“By 2023, North American frack sand demand will reach an estimated 231 billion pounds, representing an increase of 113% above peak demand levels for 2014.” In 2011, the market for frack sand in U.S. onshore operations was slightly above 51 billion pounds.

“Sand proppant demand is at record highs — the growth rate is extreme by any measure,” said IHS Markit’s Brandon Savisky, who authored the analysis. He is a senior market research analyst for cost and technology. “We expect it will continue to expand at an estimated current annual growth rate of approximately 16% by 2023, with the Permian Basin leading the pack in terms of North American frack sand demand. The basin accounts for nearly 40% of the market demand, but by 2023, the Permian Basin will account for almost 50% of proppant sand demand.”

According to the IHS Markit analysis, more than 70% of the entire North American proppant demand derives from the Permian, Appalachia and Eagle Ford, and these three plays are forecast to account for 75% of the market by 2020.

The IHS Markit analysis found Canadian demand accounting for nearly 4% of North American frack sand demand in 2018 and dropping “only slightly” by 2023. This year 65% of Canadian demand for proppant sand is originating from the Montney, Duvernay and Deep Basin plays.

In addition to more sand use in terms of volume/frack per lateral foot, “the mesh size of the sand used has gotten finer, particularly in the Permian Basin, so more sand is required,” noted IHS Markit’s report.

During the oil price downturn of 2014 through 2016, operators were pressed to cut operating costs to improve economics and simply survive, Savisky noted. Many E&Ps eliminated the use of more expensive RCS and ceramic proppants in favor of less expensive and more abundant sand.

“Ironically, that choice, and an adjustment in the formula toward larger volumes of finer-mesh sands, enabled many producers to maintain production levels, and in some cases to boost production, so cost-saving efforts drove innovation that has now become the preferred completion model,” Savisky said. “However, most Permian operators are still tweaking their completion designs as they search for an inflection point to identify any points of diminishing returns.”

Costly supply chain constraints, particularly in the Permian, have led many frack sand operators to invest in self-sourced supply by purchasing the storage and transportation assets to ensure better efficiency and cost containment from the mine to the wellhead.

“Transportation costs continue to comprise more than 65% of sand costs, so reducing those costs and securing supply are very valuable to operators,” Savisky said. “The cost (of sand) landed at the well site is heavily weighted on the logistics premiums, so transportation, coupled with proximity of supply and storage, is valuable to operators trying to manage both cost and supply chain risk.”

Regional and Texas brown sands have seen a surge in investment capacity underway or on the drawing board. However, challenges related to infrastructure and water availability may continue to plague the sector.

Some of the country’s largest frack sand suppliers, including U.S. Silica Holdings Inc., Hi-Crush Partners LP, Emerge Energy Services LP and Carbo Ceramics Inc., all reported higher revenue for 2Q2018. They also are making moves to improve their last-mile logistics, ensuring proppant is delivered as efficiently and cost-effectively as possible.